She cannot afford to match Omar Abdullah's political rhetoric, but she can deliver on the perception the governor has created.

There is a perceptible change in Jammu and Kashmir since January 8, when governor NN Vohra took charge of the restive state following the death of former chief minister Mufti Mohammad Sayeed. Some 100 doctors have been terminated for being on unauthorised leave of absence for two decades, and advertisements have been issued for fresh recruitments in their place.

Seven doctors were cooling their heels in New Delhi's Kashmir House. The governor promptly detached them and sent them back to their respective postings.

The governor came up with rules about appointment of government advocates, laying down guidelines based on experience and merit. Now even if ministers in the new PDP-BJP government, as practice, want to appoint relatives as additional and deputy advocate generals, they will have to recruit experienced and meritorious ones. Sycophancy alone cannot help, merit will. 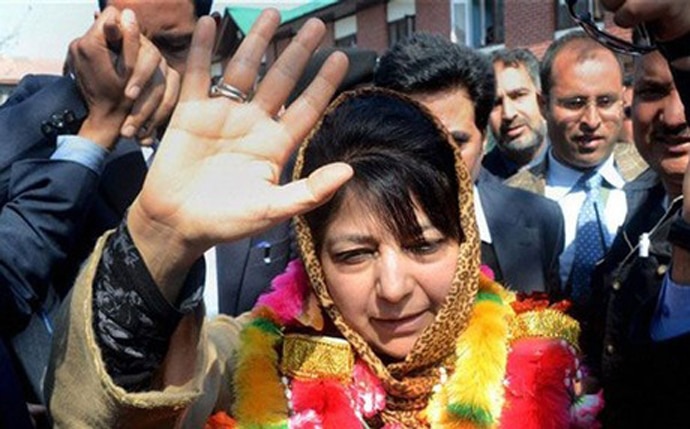 Mehbooba Mufti at an election rally in J&K.

As the Centre released Rs 400 crore for relief distribution among the flood-affected people in various parts of Jammu and Kashmir, the money directly went into the bank accounts of people with the direction from the governor that by March 31, the disbursements should be handed out. No function was organised to claim credit for the disbursals.

Another significant achievement: After 12 long years, street lights have started functioning on Hyderpora bypass. Elected governments failed to sort out the issue with the contractor, who had installed street lights, but refused to electrify them, which ensured the arterial pass was not lit.

Now the primary job of Mehbooba Mufti as chief minister will be to continue the pace of governance which Vohra has brought to Kashmir. For nearly 77 days, Mehbooba didn't assume charge and her party leaders were privately saying that the party is seeking what even Sheikh Abdullah had not dared to. Mehbooba talked about Jammu and Kashmir-centric Confidence Building Measure (CBMs) and her party leaders described the Agenda of Alliance as a "sacred document".

Now that Mehbooba is about to take oath as chief minister, the party has not spelled out the CBMs it sought from the Centre. This indicates Mehbooba Mufti was hurt over the way the Centre treated her father. Hence the reluctance. Money was not released to Sayeed for to aid the flood-affected and the Centre didn't respond to his repeated calls of holding talks with Pakistan.

In his nine-month rule, Sayeed would often talk about opening of roads and resumption of the dialogue between India and Pakistan. Presuming that the mainstream party, which is ruling in Srinagar, could force New Delhi to change foreign policy, Sayeed repeatedly called for the dialogue, describing it as essential. New Delhi was in no mood to do anything with Islamabad and nothing happened.

And when New Delhi felt it should hold talks with Islamabad, Prime Minister Narendra Modi visited Lahore to meet his counterpart Nawaz  Sharif, surprising everyone. Modi's overture to Lahore didn't give any room to the PDP for political manoeuvring. Because since 2003, the party has been saying that former Prime Minister Atal Bihari Vajpayee had extended the hand of friendship to Pakistan when the PDP was ruling the state, Modi gave his party's ally nothing except a snub by conveying to the leadership that he doesn't need anyone's advice on Kashmir.

Often, former chief minister Omar Abdullah talks about the restoration of autonomy and says if anyone can get more than that, he would welcome it. The PDP should also talk about its "sacred document" in the same language.

Late J&K CM Mufti Mohammad Sayeed would give example of Sajad Gani Lone and ask separatists that they emulate him and join the mainstream. Mehbooba too should follow Lone's example. In the separatist camp, he came up with a 268-page document called "Achievable Nationhood" which he describes as a vision document on the resolution of the Jammu and Kashmir conflict.

He would often talk about Azadi and became a votary of Azadi in 2008 and 2010. But in nine months as minister from the BJP quota, he didn't pursue any political issue or talk about his "achievable nationhood".

Instead, as minister for animal husbandry, he came up with a Rs 2000 crore vision document for reviving the livestock sector and said that the roadmap had been designed to revamp the sector with a target to achieve self-sufficiency in poultry, meat and milk in the state by 2025.

He knew his limitations. So should the PDP.

Now the challenge for Mehbooba is that by being in the government, she has to ensure good governance, a corruption-free government and keep rightwing elements in BJP, which had raised issues like beef eating and the state flag last year, under leash. She has the mandate for it under the Agenda of Alliance, which states: "the present position will be maintained on all the constitutional provisions pertaining to J&K, including the special status in the Constitution of India."

For six long years, from 2008 to 2014, Omar Abdullah's rhetoric was high on political issues, from pushing for AFSPA's revocation to restoration of autonomy.

Now the challenge for Mehbooba is to better the governor's record. She cannot afford to match Omar Abdullah in his political rhetoric, given the coalition she is in, but the new J&K CM can take forward the perception on governance created by Vohra.

#BJP, #Mehbooba Mufti, #NN Vohra, #Jammu and Kashmir
The views and opinions expressed in this article are those of the authors and do not necessarily reflect the official policy or position of DailyO.in or the India Today Group. The writers are solely responsible for any claims arising out of the contents of this article.