Why is India failing to stop Kashmir's children from turning into militants?

It has done nothing to rescue them.

The 2010 civil unrest in Kashmir claimed more than 127 lives, mostly of youth, including those of juveniles like Wamiq Farooq, Zahid Farooq and Tufail Matoo. It was Kashmir's fourth generation since 1947 that was actively involved in the Kashmir dispute.

That year, Kashmir witnessed not only the peak of violations by the government forces, but also the birth of a new idea. The 2010 unrest also gave birth to the idea of openly joining the armed struggle against the Indian state, which created an atmosphere of receptive youth who had grown accustomed to the hostile situation prevalent in Kashmir.

As a result, the fear among Kashmiri youth fizzled out and boldness came to fore, a trait associated with personality development in educational institutions where one is taught to face the challenges.

The generation also started a new trend of Friday protests, especially in the Downtown area of Srinagar. There were tech-savvy youth too who gave birth to a social media movement, but the "stone" became a symbolic expression of anger towards New Delhi in Kashmir.

Adolescence has innate ways of expression, heroism, and romance; the youth want to contribute towards social activism, as was evident from their activities in the 2014 floods when the entire Valley was inundated. For they have enormous energy when they act in tandem! 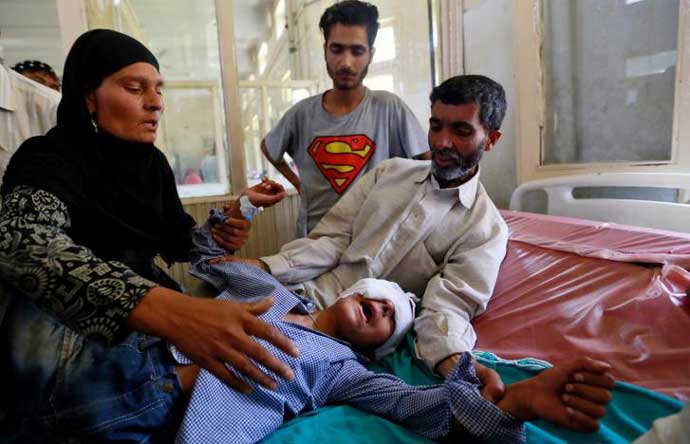 Parents comfort their son whom they say was injured by pellets shot by security forces in Srinagar following weeks of violence in Kashmir, August 18, 2016. REUTERS/Cathal McNaughton

Here, both the Centre and the state had a favourable opportunity to tap into and channelise the energy in the right direction.

The killing of Hizbul Mujahideen commander Burhan Wani in 2016 acted as a trigger for the youth to continue the resistance against the state. His death not only inspired dozens to join the armed struggle, but also motivated the younger generation to follow in his footsteps.

To hold down these angry youth, central government forces introduced bullets and pellets, and the ruling PDP-led government added PAVA shells to make the situation worse.

On the other hand, this year, the government closed educational institutions in parts of Kashmir to maintain law and order. However, it created a dilemma and frustration among the youth. The arrests of minors and booking them under draconian laws such as Public Safety Act (PSA) worsened the situation on the ground.

An ephemeral lull is not normalcy, it is management. Equally, the absence of violence is no aspect of peace. However, curbing violence by structuralism is taken as a move in the right direction.

However, the blank irony in Jammu and Kashmir is the absence of police dedicated to juveniles as well as juvenile courts and homes. Because of the lack of proper juvenile institutions, the situation has gone from bad to worse in no time.

So as far as the youth and children are concerned, it clearly indicates that the government has failed to implement the Juvenile Justice Act existing in state, which was passed in 2013.

The youth, who make up for 60 per cent of the Valley's population, would have grown by 4-5 per cent but for the hostile situation in Kashmir, which became a causative agent for late marriages.

On the other hand, the government introduced programmes like Udaan (flight) and Army operations like Sadbhavna (harmony) to win the hearts and minds of Kashmiri youth but that was an absolute failure as a few top Army officers in 2010 on record said that Operation Sadbhavna has been met with failure in the Valley.

The United Nations Convention on the rights of children (UNRC) 1989, of which India became a signatory in 1992, talks about the protection and care of children and states even a child who joins militancy needs to be rescued. India being a signatory of this act, should have rescued them. "Where comes the liquidation?" asks a prominent child rights activist of Valley.

He agrees that frustration sometimes becomes a reason for the agitation and an example of this frustration is Faizan Bhat, who was just a 15-year-old when he joined militancy. He was supposed to be rescued, not eliminated.

The activist further explained that the acts of government forces in Kashmir are indicative of the clear violation of the existing Juvenile Justice Act.

Yes, the government needs to follow the UNRC norms by developing the 4Rs, (Rescue, Relief, Rehabilitation and Reformation) so far as child militant cases are concerned.

If oppression is "A" — which is of course is nasty, ugly, inhuman, unruly and full of discrimination — and if resistance is "B" which is attractive, analytical, logical, fact-based and firmly believes on the policy of togetherness and respects the merit.

However, for instance, if the elements of "B" are found in "A" it may be called a political process meant for the resolution of conflict. At the same time, if elements of "A" are found to be in the shoes of "B" then it is absolute anarchy.

The children are but innocent because they are young, immature and unable to decide the difference between right and wrong. As far as Kashmir is concerned, what if these children have no right to vote because they are out of the ambit of "adult franchise" when the time comes to have a referendum or plebiscite?

Therefore, all the three Hurriyats including JKLF have to give serious thought to the ongoing political resistance movement and deconstruct it to save the children of Kashmir, who are becoming both the casualty and causality of the armed conflict.

Also read: Unrest in Kashmir is bad for India, but good for Modi government

#Kashmir Unrest, #Jammu and Kashmir
The views and opinions expressed in this article are those of the authors and do not necessarily reflect the official policy or position of DailyO.in or the India Today Group. The writers are solely responsible for any claims arising out of the contents of this article.

Born and brought up in Kashmir, the author is a freelance writer based in Delhi.