The evident truth today is that militancy has failed in the Valley.

Kashmir is changing. India now has the makings of a new Kashmir.

The separatists and soft separatists of Kashmir will dig in their heels and rebuff any such statement. But at people's level, the change is happening.

The wheels of change are turning in Kashmir: gradually and definitely.

The question is that when will India change the way it looks at this troubled part of the nation. The lens with which India views Kashmiris must change. While we rightfully embrace Kashmir as our own, we have to embrace Kashmiris as our own too.

Also read - India-Pakistan hackers are at war: Lata Mangeshkar is in the middle of it

The government must control the hate speech against minorities, and acts of intimidation and killing over movement of cows. Toxic conduct by members of any community vitiates the entire country. This is more applicable for the Kashmir, which is now finding greater acceptance for India.

The evident truth today is that militancy has failed in the Valley. The recent spurt in attacks by militants is a desperate attempt to grab eyeballs and headlines as they fade out from the Valley.

This fading-out will not happen in a few months. It may still take a couple of years. These small bands of militants have the advantage of the surprise factor as they engage in sneak attacks on the security forces.

Headers and news reports in the news media proclaim this, and it is assumed to be so.

Also read - You cannot take 1947 out of Kashmir

Such is not the case.

There is no armed militancy ready to rise like a giant in Kashmir again. Only small groups of militants are left in the Valley, and the security forces are closing in upon them. The ground beneath their feet is shrinking.

There is no new wave of militancy in the Valley, as was feared about a year ago. The wave, instead, is of hundreds of Muslim Kashmiri youth moving each year into the Indian mainstream, for higher education or jobs. Yes, there is a large brigade of disgruntled, angry youth and an army of online armchair jihadis. In the last few years, they have been fighting a vociferous battle against India in social media platforms.

The surrender of a top Hizbul Mujahideen militant has come as a huge dampener for this armchair jihad. Tariq Pandit, a close aide of Burhan Wani, poster boy of Kashmir militancy, recently surrendered to the Indian Army. This is a major setback for Kashmir's frontline militant outfit.

The information shared by Tariq Pandit is proving vital for the security forces, because of his firsthand knowledge of the operations of this militant group, their hideouts and their strategies.

Equally important is the psychological impact of Tariq Pandit's surrender on the Kashmiri youth. Tariq was among the group of young militants who had famously posed barefaced for a photograph, armed with Kalashnikovs. Their photograph had gone viral on the social media in Kashmir.

What caused the disillusionment of this top Hizbul Mujahideen militant, leading him to give up the gun? This introspection is vital for Kashmir today, and it is happening.

The anger that still simmers in Kashmir is the anger of perception. It takes years for perception to build, or change. The important thing is that the shift has begun, and Kashmiris themselves are changing. In a few years, this change will percolate into the entire Kashmir society.

This is not to say that the old patterns of Kashmir have faded. A month ago, The Indian Express carried a front page report on interactions with the youth in south Kashmir. The youth chorus in the interactions was reflected in the headline: "Mentally, we are militants".

This anger and alienation is a natural reaction of the generation which grew up in a culture of despair and hopelessness, formed by decades of violence. Fortunately, these youth are largely restricted to their militancy at a mental level only, with flashes of this rage seen sometimes.

The frustration in Kashmir is also the result of collapsed government systems.

As in many other parts of the country, the towns and villages of Kashmir are marked by highly insanitary conditions, piles of garbage, bad roads, hospitals that don't function or care enough for the needy, poor government schools, a fragile local economy offering little employment, and levels of corruption in the government and the police that may be among the worst in the country.

Also read - Secure Ladakh before China teaches us another lesson

This is mob rage. At an individual level, Kashmiris are now engaging with mainland India in social, political and economic spheres. The change is impacting Kashmir slowly and surely.

With the emphasis on higher education and white collar jobs, Kashmiri youth are being driven by their parents to pursue a life of excellence and peace. Parents of school and college-going children know that such a life cannot happen in a militancy-torn Valley. 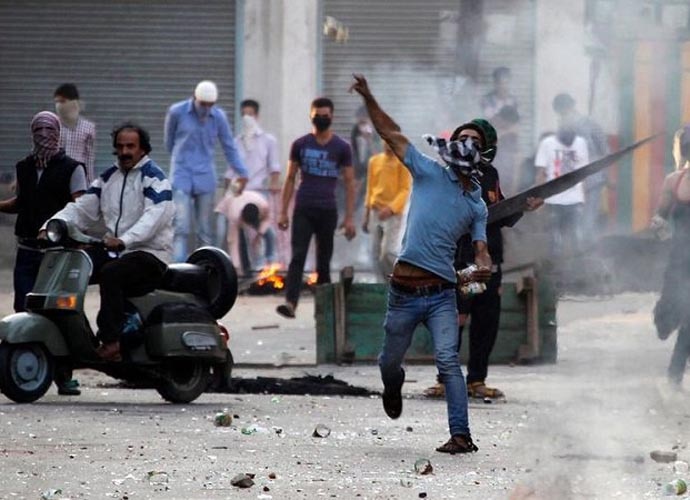 Efforts may be made to inflame Kashmir over contentious and sensitive issues. (Reuters)

This season, Kashmir is teeming with tourists from various parts of the country. Construction activity is on a boom across north and south Kashmir. In the various towns and villages, new, beautiful houses are being constructed. Rows of new shops are coming up along roads.

Kashmir's towns and villages are abuzz with people going about the daily business of their lives, and children rushing to school or playing in playgrounds. Flights and hotel bookings are full.

Outsiders who have been visiting Kashmir for many years are surprised to find that they can travel in the Valley in the late hours of the evening without any fear. Cafes and restaurants are bustling with locals and tourists alike.

Also read - Where are the happy stories from Kashmir?

Across the towns and villages of Kashmir, parents want to see their children holding degrees and prestigious jobs. Not guns or grenades.

Ennui has set in with the constant strife and conflict. Hence, the strict refusal of most parents to allow their children to participate in stone-throwing activities or other civil protests.

Kashmiri youth who come to mainland India to study or to work carry with them the congenital sense of injustice against the "Indian system". But privately, they are willing to walk the extra mile to integrate with the Indian mainstream.

At such a juncture, bullying by fellow students based on old prejudices hits hard.

In such a scenario, when Kashmir is looking for peace, efforts may be made to inflame Kashmir over contentious and sensitive issues like the proposed separate residential colonies for Kashmiri Pandits, and also for former Armymen and their families.

There are real concerns that the separatists and also Pakistan may try to fan these fires. It is imperative that Mehbooba Mufti, her team and her coalition partner must deal with these thorny issues with great competence and care.

Also read - Why the Geospatial Bill is absurd and impractical

The BJP top brass must ensure that the party's ministers at the Centre and also in Jammu and Kashmir exercise wisdom and restraint while commenting on these issues.

It will greatly suit the separatists and other vested interests to incite people to take to the streets, and address these contentious issues through agitation and violence.

Even as militancy is fading out, a fight over these issues may lead to a serious law and order situation in the state, as has been witnessed in the past few years.

Kashmiris are now engaging with the State now in diverse spheres. At an individual level, their fight with Delhi has petered out. There is tacit support to militancy only at mob level.

Mehbooba and her party, her coalition partner in the state and also the BJP at the Centre must be deft in their handling of the political psyche of the majority community of the state.

The saffron party should forego a hard line position on contentious and sensitive issues in public domain. Following the "coalition dharma" in Jammu and Kashmir will serve national interest more.

#Indian Army, #Minorities, #Kashmir Militancy, #Jammu and Kashmir
The views and opinions expressed in this article are those of the authors and do not necessarily reflect the official policy or position of DailyO.in or the India Today Group. The writers are solely responsible for any claims arising out of the contents of this article.