Why I see Jayalalithaa versus Modi in 2019

The Chennai Super Queen has already converted the state to 'Amma Nadu' and has nothing more to achieve there.

Let me stick my neck out on this one. Jayalalithaa will make a serious bid to move from Poes Garden to 7, Race Course Road. Yes, she made an attempt in 2014 as well, winning 37 of the 39 seats in Tamil Nadu, but the Modi wave in non-Tamil Nadu India was too strong for Jaya to be a factor.

Jaya is ambitious, make no mistake about that. Having done an MGR, she has nothing more to achieve in Tamil Nadu. The state has already been converted to Amma Nadu, a name that will get further reinforced in the next five years. Anointing a chief minister won't be an issue for her at all, given the servility that defines the AIADMK.

Also read: Jayalalithaa does what mentor MGR did to keep DMK out

If you doubt that, just go through the images of her newly-elected MLAs falling at her feet, offering her a bouquet. The "Chennai Super Queen" will now aim to win the Indian Political League of 2019. 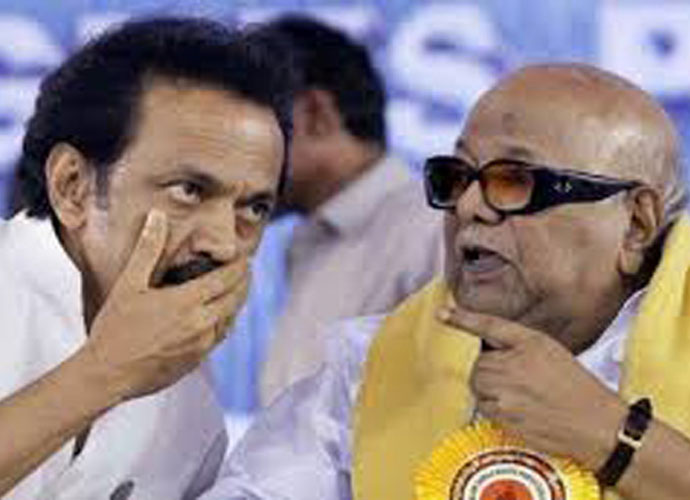 Jayalalithaa's consecutive success after 2011 stumped the DMK father-son duo of Karunanidhi and Stalin.

But we will come to that later. Admittedly, the 2016 victory is not an Amma tsunami, like in 2011 or 2014, but nevertheless, a cyclonic storm strong enough to ensure Karunanidhi's dream to score a sixth term as CM, came a cropper. Jayalalithaa's "doosra" consecutive success at the EVM after 2011 stumped the DMK father-son duo of Karunanidhi and Stalin, plumb leg before the Marina wicket.

The result has come as a surprise because even though there was nothing to suggest anti-incumbency against the Jaya regime, there was an undercurrent of dissatisfaction and anger among the unemployed youth, yearning for jobs, and farmers, burdened by agrarian distress. Perhaps, this is why the final tally of seats is close, not the usual one-sided elections that Tamil Nadu is used to.

But what seems to have worked for Jaya are arithmetic and chemistry. The anti-AIADMK vote split between different formations meant DMK faced an uphill task. In the past, the DMK has done well when it has stitched a rainbow alliance with smaller parties. The failure to do so will haunt Karunanidhi for a long time to come.

The DMK focussed excessively on the lack of accessibility factor of Jayalalithaa. If the results are anything to go by, it showed the masses did not care. Yes, Stalin gained eyeballs with his sartorial makeover but the verdict shows clothes don't maketh a man.

The welfare agenda unleashed by Jayalalithaa in the last five years delivered the goods for her party. It is as if every idli sold for one rupee converted itself into a vote on May 16. Furthermore, the focus on the women vote with promises like 50 per cent discount on scooters for working women, seemed to have tilted the balance in Jaya's favour. The world may snigger at the omnipresent Brand Amma but the "makkal" (people) of Tamil Nadu do not seem to mind it one bit.

The DMK had hoped to ride to power on the promise of prohibition but the people of the state gave them a kick of a different kind. It would have reason to feel disappointed because women genuinely felt their domestic harmony and finances suffered due to alcoholic husbands. How will Jaya deliver on her promise of phased prohibition is something that will be keenly watched.

Dayanidhi Maran played the bad loser, alleging money distribution did the trick for the ruling party. For someone whose party is infamous for the Thirumangalam bypoll in 2009 when voters were bribed by the DMK, this sort of an allegation did not sound convincing. Also it is not entirely true because both parties were guilty of distributing cash to buy votes.

And lastly, corruption allegations against Jayalalithaa and Karunanidhi's family members cancelled each other out. The voter simply did not seem to care that Jaya had been sent to jail.

As Tamil Nadu gets set to see a new dawn under Jayalalithaa, the rising sun has been eclipsed for the next five years. With over 100 MLAs in the Tamil Nadu Assembly, it will be a strong Opposition but it will have to alter the template of its opposition to Jaya.

For the AIADMK chief, the bigger challenge now is how will the bleeding exchequer of Tamil Nadu find funds to deliver on its promises. Saying we will make Tamil Nadu number one in all sectors is one thing, achieving it is quite another.

Post your comment
#AIADMK, #Tamil Nadu, #Elections 2016, #Jayalalithaa
The views and opinions expressed in this article are those of the authors and do not necessarily reflect the official policy or position of DailyO.in or the India Today Group. The writers are solely responsible for any claims arising out of the contents of this article.