Will Dravidian politics survive after Jayalalithaa?

Flawed but great, the frustratingly enigmatic 'Amma' may be one of the last phenomenal cult figures of Indian politics.

If the AIADMK weakens, who or what will take its place? The DMK will certainly go to the polls in 2021 under Stalin’s leadership. If they would be in a position to profit from the absence of their most formidable political opponent remains to be seen. This may also be the moment smaller parties such as the PMK, the MDMK, and Dalit-centric outfits were waiting for to try and expand their influence.

Vijayakant’s DMDK and the national parties will also fancy their chances - more the BJP than Congress. Tamil Nadu politics, which was once strictly guided by the Dravidian parties and their ideologies, will become less predictable. 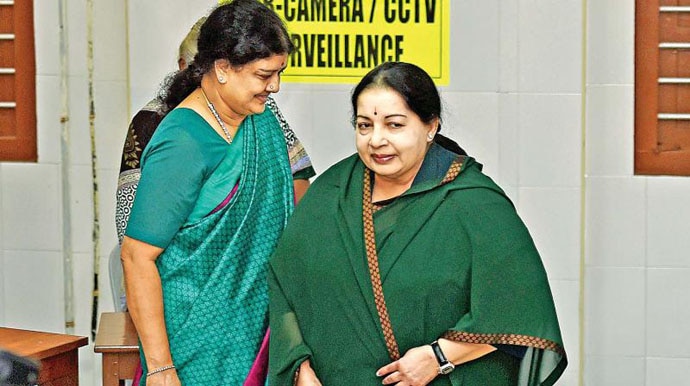 For now the party seems to be with Sasikala, but only time will tell if she can fill the void left by Jayalalithaa. Credit: PTI

The Puratchi Thalaivi (revolutionary leader) of Tamil Nadu is no more and the Kalaignar is old and ailing. Bitter opponents - yes they were. But between them they held the key to Dravidian politics for more than three decades. The Dravidian parties rose to power and prominence in the political stage of Tamil Nadu in the 1960s. And after the DMK came to power in 1967, the Dravidian ideology became the cornerstone of politics in Tamil Nadu.

Jayalalithaa can be solely credited for the survival of the AIADMK after MGR. But she trusted a few and her style of functioning may have left the AIADMK with few alternative leaders and definitely none of her stature. On the other hand, Karunanidhi has ensured that DMK has a political heir. Then again it smacks of dynastic essence, the way aspirants, mostly relatives, have been fighting for their share of the Jayalalithaa legacy.

The Puratchi Thalaivi's governance has few parallels, but she brooked no dissent. She was rarely seen, rarely gave interviews and even more rarely accessible yet her connect with the masses, the poor was unequalled. Some would attribute this to the various "Amma" schemes, which were a heavy burden on the exchequer, maybe but the strategy of freebies started with Karunanidhi.

Flawed but great, the frustratingly enigmatic J Jayalalithaa may be one of the last phenomenal cult figures of Indian politics.

Post your comment
#Dravidian politics, #Sasikala, #Jayalalithaa
The views and opinions expressed in this article are those of the authors and do not necessarily reflect the official policy or position of DailyO.in or the India Today Group. The writers are solely responsible for any claims arising out of the contents of this article.