Reforms in Islam can help destroy the cancer of jihad

Tufail Ahmad's book 'Jihadist Threat to India' must be read carefully by all Indians concerned about future of the country.

Tufail Ahmad is a powerful and provocative voice for reform in Islamic society and in India in particular. He is also a key expert on national security issues in India, which is under siege by jihad.

His recent book – Jihadist Threat to India: The Case for Islamic Reformation by an Indian Muslim - is probably the most in-depth study of jihad, terrorism in India available, extending to its global implications.

Ahmad’s background is quite relevant, from a student at madrasas in Bihar, to study at JNU and work at the BBC. He knows his issues from the inside, having examined jihadi literature extensively. He does not have to rely upon secondary sources, nor does he excuse jihad for vested political or religious interests.

Jihad and Pakistan’s war on India

Ahmad details how the Al-Qaeda threat to India has arisen through the Taliban in Pakistan and Afghanistan. He explains how ISIS is slowly radicalising Muslims in a number of states in India, with little scrutiny.

Behind the threat in India, he reveals how jihad is linked to the history of Pakistan and its identity as a nation. Pakistan is by nature if not a jihadi state, a state promoting jihadi sympathies and training jihadi warriors. This mentality extends to Pakistani textbooks that teach students to hate India with a religious fervour.

Yet Pakistani jihad is not just aimed at India, it is used to control minorities within the country, particularly Balochistan, which is subject to a brutaland violent suppression. This is because Pakistan’s identity is defined by religion and remains precarious when people awaken to their local needs. 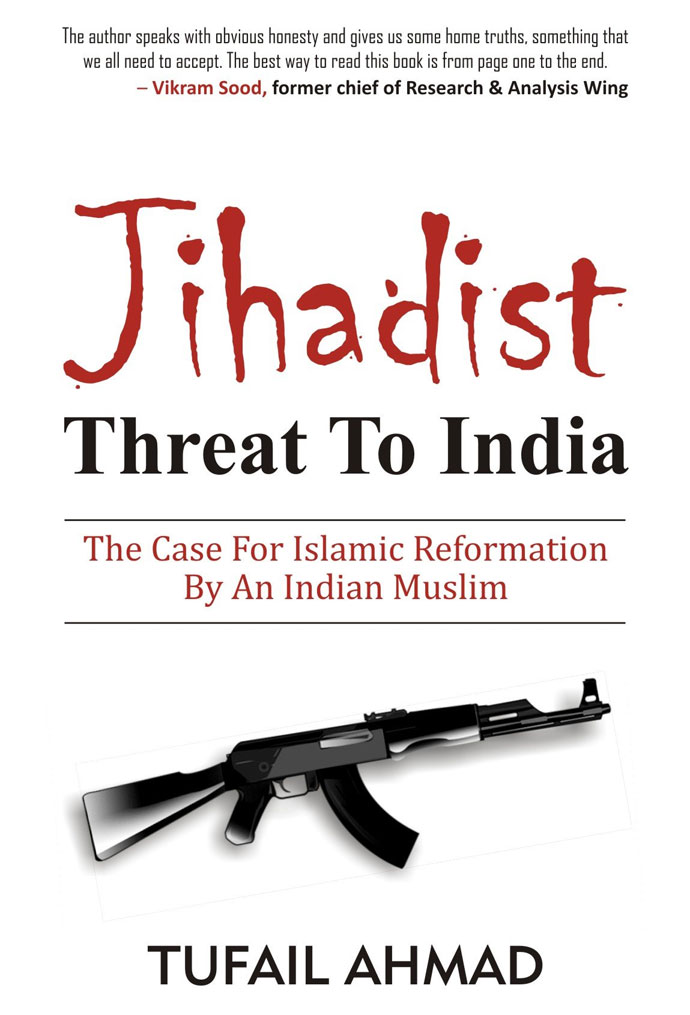 Jihadist Threat to India: The Case for Islamic Reformation by an Indian Muslim, by Tufail Ahmad.

Ahmad uncovers Pakistan’s support from Saudi Arabia, as well as Saudi’s support for global jihad through its well-funded network of madrasas. Sympathy to jihadist activity is taught in Saudi funded and Deobandi schools throughout the subcontinent.

Ahmad examines the scope of global jihad, including the role of the US, Britain and Europe, noting the great blunders made by the West in dealing with it. Jihadist terrorism is not about disenfranchised or poor young Muslims who have no jobs or alternatives to express themselves. It is not about young Muslims in western countries who feel culturally inferior or rejected. Such factors may provide some fertile ground for Jihad but do not cause it.

To put it simply, jihadist terrorism is part of a proxy war. It cannot flourish without significant state support. Pakistan remains the focus of this proxy war relative to India, with Saudi help in the background, and an outdated Islamic theology as its ideological mooring.

Several other Islamic countries have lended state support to jihad or turned their eyes aside from terrorist funding from within their own borders.

A call for reform in Islam

Ahmad raises a compelling case for reform in Islamic society, notably promoting a secular education for the Muslim youth, particularly girls between the formative ages of 6-14. It is sad that governments are not taking up the cause of proper modern education for Muslim children, especially the girls, nor are NGOs.

Some Muslims may not be happy with his call for reform being combined with promoting India’s national security interests. But the fact is that jihad is a great danger to Muslims as well non-Muslims, such as we see occurring in Syria and in the attacks on Shias and Sufi sites in Pakistan.

Some leftists may be unhappy that he exposes Indian secularism as a pandering to minority vote banks that excuses jihad. It is not just the conservative elements in Islamic society that suppress Islamic reformers, it is also the Left and liberal elements in India and the West, who promote reform movements in their own societies, yet excuse fundamentalism, if not terrorism, coming from Islamic groups.

Jihadist Threat to India should be read carefully by all Indians concerned about the future of the country and by all those in the world who wish to know the roots of global jihad. Such Islamic reformers as Tufail Ahmad should be studied and supported, as the solutions to these grave problems are most likely to arise from their insights.

#Islam, #Pakistan, #ISIS, #Jihad
The views and opinions expressed in this article are those of the authors and do not necessarily reflect the official policy or position of DailyO.in or the India Today Group. The writers are solely responsible for any claims arising out of the contents of this article.