It may have won again in its stronghold, but it is doubtful that JNU and the Left itself will survive such anarchy for long.

“The people can always be brought to the bidding of the leaders. That is easy. All you have to do is tell them they are being attacked”.

This famous quote of the Nazi leader, Hermann Göring, is the one-line explanation of the winning formula of the Left in JNU. Every year, during election time, the hysteria of ''JNU under attack'' is whipped up and the whole election is projected as a war between JNU and the outside world. Some mysterious forces are always planning to destroy JNU, its dilapidated hostels and revolutionary dystopia.

The narrative remains the same even though the enemy lurking just outside the JNU gates keeps changing over time. Sometimes, it’s the Supreme Court of India working on the commands of the “ruling bourgeois” to impose Lyngdoh committee recommendations and overthrow the "JNU constitution". Other times, it is the Congress government, conspiring with the World Bank and WTO, on how to destroy JNU's student politics. After all, the ruling classes tremble at the slogans of "Lal Salaam" at Ganga Dhaba! And today, it is the BJP-RSS trying to curtail their freedom to not attend classes and demand "Kashmir Ki Azadi”. Every year, the hysteria of ''JNU under attack'' is whipped up and elections are projected as a war between JNU and the outside world. (Photo: PTI)

This year too, the entire election was fought against the "unprecedented attack” on JNU by the BJP-RSS. Well, anyone familiar with JNU politics would know that JNU is always under "unprecedent attack", just like Islam is always in danger. The causus belli this year was the implementation of the UGC guidelines which limit the number of students a professor can mentor in the MPhil-PhD programme.

This led to a sharp decline in the seats advertised for admissions as the ratio already exceeded the permissible limit. Second was the introduction of compulsory attendance. Both were marketed as the undeniable ''proof'' of the nefarious conspiracy hatched by the Modi and Amit Shah government themselves to destroy JNU and its unique culture.

Also, a lesser known fact is the steady decline of the Left in JNU campus over the past several years, with the old Left giving way to the far-Left and anarchism best reflected in the anti-India sloganeering heard in February 2016. This has steadily eroded even the façade of progressive politics and laid open the caste and communal politics which always informed Left politics.

Behind the rhetoric of ideology, the Left in JNU has always practiced the usual electoral politics of caste, region and communal sentiments — if AISA candidates openly condemn Shia students to please the larger Sunni Islamist crowd, then the SFI Presidential candidates have openly asked for votes by showing their sacred threads.

Apart from this, the Left for the past several years has been besieged by the resurgent ABVP and Ambedkarite BAPSA. The strong revival of the ABVP after almost a decade forced all the Left parties into a ''grand alliance'' to prevent their ultimate doomsday scenario — the fall of the "Kremlin on the banks of Yamuna" to the saffron tide. 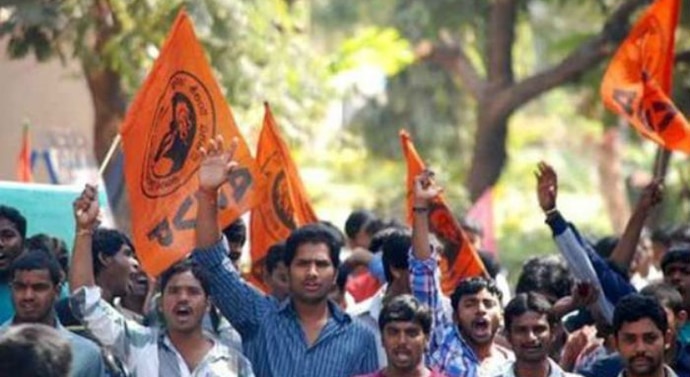 Saffron Tide: This bitter election campaign by the Left focused exclusively on demonising the ABVP and its cadre. (Photo: ABVP)

There was a high probability of the victory of this Left alliance but the general perception in the campus was of change and that ABVP might win a seat or two in the central panel. This led to one of the most bitter election campaigns by the Left — which focused exclusively on demonising ABVP and its cadre. Campus issues were thrown out of the window and all that is wrong in the world was made the responsibility of ABVP!

Well, nothing surprising there, given that the Left in the campus has always fought elections on the issues which are well beyond the scope of the student politics — after all, who can hold the leftists in JNUSU accountable for not marching to liberate Palestine? Or for not unfurling the red flag at the RSS headquarter at Nagpur? Or for not ensuring 10 per cent of GDP on education? Vague rhetoric, virtue-signalling and empty promises dominated this year’s campaign as well.

Despite ruling JNUSU for years, the Left has no explanation of the water crisis in the hostels — but ABVP candidates should answer about some random quotes from Manusmriti!! This is what the JNU Presidential debate has been reduced to. But, despite vicious propaganda and an acrid atmosphere against political opponents, JNU has mostly avoided campus violence so far. But this year’s election was marred by open violence. This year, the JNUEC started counting of the central panel votes without the polling agents of the ABVP candidates. The ABVP claims that its representative were kept waiting for forty minutes at the entrance on one pretext or the other before being told that counting had already started and they won’t be allowed as they "are late".

This led to protests and halting of the vote counting as the matter reached the university’s grievance redressal cell. In the meantime, the cadres of the Left parties reportedly assaulted ABVP activists and students demanding a recount in the presence of the representatives of the ABVP. Videos show that girl students were beaten up and in full view of the public, a Left activist was reportedly running towards them with a sharp weapon in hand. 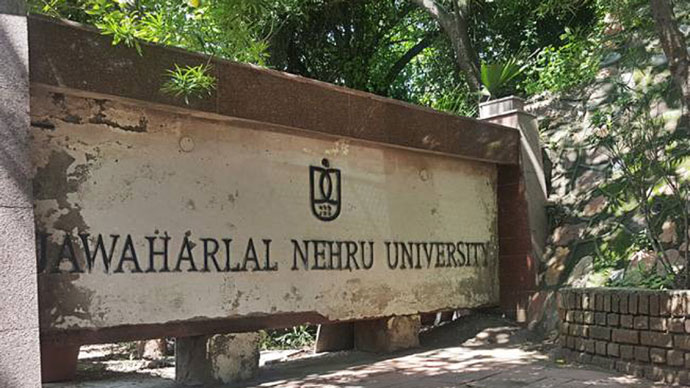 It is doubtful that JNU will survive such campus anarchy for too long. (Photo: PTI)

A student's leg was fractured and the hand of another was broken. This led to the deployment of the police.

Counting was restarted after the intervention of the administration. As the videos and pictures of the assault started emerging on social media, the Left found itself on the backfoot and as a counter, started rumour-mongering of hundreds of outsiders supposedly belonging to the ABVP apparently entering the campus to stop vote counting.

Comical claims were made with random pictures of cars, with conveniently written "Jai Bajrang Bali" and Haryana numbers, lathis placed in front of them! Turned out that those lathis belonged to the Left parties for their flags in the victory procession the next day as the trends became clear.

The Left might have won again in their stronghold — but in the process, it has set a wrong precedent and irreparably damaged JNU's electoral politics.

It is doubtful that JNU and the Left itself will survive such anarchy for long.

#Amit Shah, #Supreme Court, #BJP, #ABVP
The views and opinions expressed in this article are those of the authors and do not necessarily reflect the official policy or position of DailyO.in or the India Today Group. The writers are solely responsible for any claims arising out of the contents of this article.