JNU professor recounts how students threatened, stopped him in campus

The protest was orchestrated to bring the university to a standstill on the first anniversary of 'Azaadi' protests, which falls on February 9.

The day before yesterday, on February 6, I was gheraoed and prevented from entering the School of Languages building at Jawaharlal Nehru University. The Students Union had called for a strike, cordoning off the buildings.

Neither a strike nor blocking entry to buildings is unprecedented in JNU. However, faculty members are not debarred from going in. Karamcharis and non-teaching staff also often enter. Even students, who don’t wish to strike, can be permitted to pass after some negotiations and arguments.

What was different this time was that not a single person was allowed inside. When I reached the building, the dean and her staff had retreated, in face of the blockade. Even the JNU security looked on, ineffectual if not incompetent spectators, as our building was taken over.

I asked them, “Why aren’t you clearing the way for those who wish to enter? Are we to surrender our university to those who had taken the law into their own hands?”

I believe that while we should not break up a peaceful strike or demonstration, we should also not allow a small section of students to hold the university to ransom. There were around 20-30 protesters at the steps, several not even from my School, some not even JNUSU representatives. 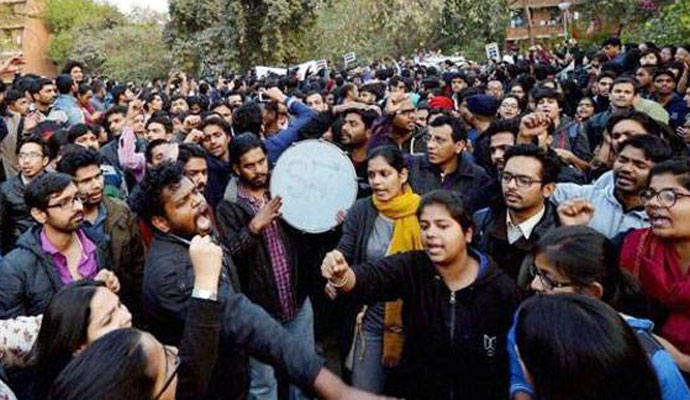 Neither a strike nor blocking entry to buildings is unprecedented in JNU. (Representative image.)

When I moved towards the door, a group of them advanced towards me.

“You cannot go in.” I asked, “Why?” They said in a chorus, “No one will be allowed in today. We are on strike.” “But I am not on strike,” I answered, “How can you stop me for discharging my duty, which is to teach, read and write?” They said, “We are fighting for social justice.” I said, “I support social justice too. But how is your cause served by debarring me from going to my office?” “We are opposed to the UGC notifications,” they said.

“I may agree with you on that, but that does not mean that you can force me to join you or prevent me from going in.” “We are not using force,” they said. “Okay, then let me go in.” “No.” “Then how are you not using force?” They tried to change the topic, “You gave a lecture on nationalism, now give one on social justice. Right now!” “Yes, I will do so, but not zabardasti. Just now I want to go inside.”

They shouted slogans, resorted to namecalling, and veiled threats: “We are 20, you are only one.” “Yes,” I said, “but you can’t impose your views on me.” “We have the right to dissent.” “Of course, but I have a right to dissent with your mode of dissent.” “You are not supporting the JNU culture.” “Don’t tell me about JNU culture; I have been teaching before you were born and have been a Professor here for more than 16 years.”

They had no answers, really. Not on a single issue could they offer a logical, reasonable argument.

The stand-off continued for nearly a quarter of an hour. There was one other faculty member who wanted to go inside too; I held his hand and said, “Let’s protest against these anti-democratic students.” But soon, he was nowhere to be found. If we were 10 teachers standing against them, they would surely have failed. But I was all alone. Finally, I said, “I myself will offer satyagraha.”

I sat down, held the feet of two of the ringleaders and pushed them away from the door. At that point, some of the seniors stepped in and said, “Usko jaane do.” I said, “Move aside; let me enter with dignity. This is my own building; I come here to work even on a Sunday; so how can you stop me from entering during working hours on a Monday?”

Much of such student politics in Indian universities is run by so-called radical groups, which, though a minority, rule the roost. If one looks at their manifestos and the party journals, one senses how regressive, undemocratic, irrational and, in today’s times, irrelevant they are.

With the failure of the revolutionary ideology all over the world, these groups have a limited cache, which is in Indian universities, where young, impressionable and socially sensitive minds fall prey to them. These are captured, if not brainwashed, and mobilised against all forms of authority. But now even the misplaced idealism of such romantic revolutionaries lies exposed as a mask of ugly opportunism.

Their slogan, which they used in their strike at JNU, was “Social Justice”. But it was only an excuse to target the Modi sarkar, the UGC and the JNU administration.

The Left and ultra-Left are now using the OBCs as their shields, as they earlier used SCs and Muslims. But their cynicism, even evasiveness, is evidenced by the fact that not one of them divulged his or her identity, academic programme, or year of study, though I asked them repeatedly.

“How can we have a dialogue if you don’t tell me your name — you are just like any of my students,” I said. They replied, “We are Najeeb,” after the missing Biotech student.  I said, “I am Najeeb too, but you can’t stop me from entering my office.”

Several of them were probably too old to be actively enrolled in a programme in JNU.

The whole protest, I surmised, was orchestrated to bring the university to a standstill on the eve of the first anniversary of the “Azaadi” protests, which falls on February 9.

Don’t be surprised if there is more trouble and turmoil in JNU. Sadly, if this happens, it is the institution and the ordinary students who will suffer the most. That is what I deeply regret.

#Najeeb Ahmed, #JNU
The views and opinions expressed in this article are those of the authors and do not necessarily reflect the official policy or position of DailyO.in or the India Today Group. The writers are solely responsible for any claims arising out of the contents of this article.