The urgency to be in the CM's good books is because a cabinet expansion and reshuffle is expected soon.

K Chandrasekhar Rao already has temples dedicated to him in Hyderabad and Adilalabad and one more is reportedly coming up in Karimnagar. The deification of the Telangana chief minister is complete, with party leaders queuing up to give his cutouts a milk bath. Inspired by Rajinikanth, KCR might well say, "En vazhi, milky vazhi" (My way is the milky way).

It is not just some lesser-known loyalists who are indulging in buttering up KCR with this dairy product. Leading the doodh brigade is milk baron-turned-politician Mahmood Ali, who also happens to be the deputy chief minister of Telangana.

He decided to give KCR's cutout a calcium overdose at the Charminar in Hyderabad. The occasion was to celebrate KCR's ranking as the most popular CM in India. While this survey was done by one VDP Associates, what brought more credible cheer was the ranking of states on the basis of Ease of Doing Business. Telangana and Andhra Pradesh shared the number one spot and Mahmood Ali decided to let the milk flow.

Other Telangana Rashtra Samiti leaders too are milking every occasion to curry favour with KCR. The urgency to be in his good books is because a cabinet expansion and reshuffle is expected soon. Since no one knows KCR's mind, those in the cabinet and the hopefuls both are investing in milk packets by the dozen.

Again, before the government completes two-and-a-half years on December 2, the hope is that KCR will fill up nominated posts and every leader wants to give it his or her best shot instead of crying over spilt milk later.

Which is why the chorus to confer on KCR the Bharat Ratna is also gaining decibel level. WhatsApp groups and banners put up at different locations are demanding India's highest civilian award for KCR for his struggle for Telangana.

Members of Telangana's Brahmin community also turned KCR's pink cutouts milky white, to thank him for setting up a Brahmin Corporation and granting Rs 100 crore to the Trust. 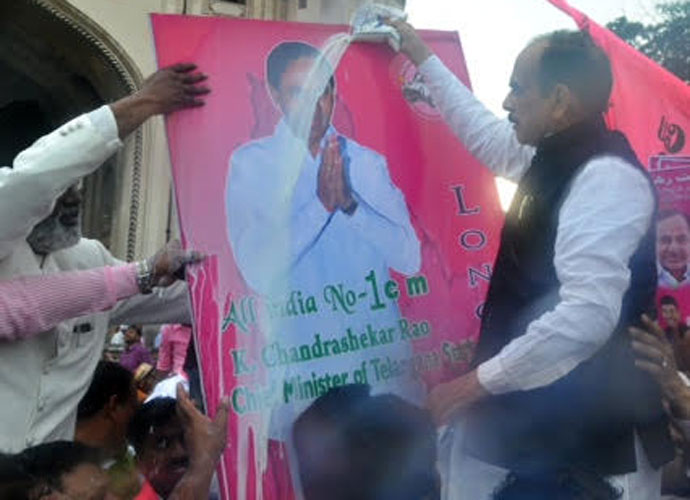 The chorus to confer on KCR the Bharat Ratna is also gaining decibel level.

Only if someone educated the TRS leaders and sycophants to feed the milk to needy children instead of wasting it. They ought to know that even the judiciary in Karnataka had frowned upon Rajinikanth's fans giving his cutouts a milk bath on the occasion of his film's release. And before the release of Kabali in July, the Tamil Nadu milk dealers' association had appealed to the superstar's fans not to waste milk.

But that is the least of TRS's worries. The plan to elevate KCR to a different level, to put him on a pedestal, is being undertaken systematically. The first step towards that will be to win the 2019 Assembly election. And plans are afoot on the drawing board to get a second term in office.

The Telangana Assembly Speaker is to reply to the high court by November 8 on the status of Telugu Desam and Congress MLAs who defected to the TRS, with some of them even becoming ministers.

For two years now, the Speaker has turned a blind eye to the new entrants, refusing to slap the anti-defection law on the MLAs. Should the court verdict go against the TRS, the plan will be to go in for byelections in about 20-odd constituencies, making it a virtual semi-final.

Keeping that possibility in mind, the TRS has begun trumpeting itself as a government that has delivered on most promises. Congress leaders claim a mid-term survey that was reportedly commissioned by TRS was given to a leading Telugu TV channel and it was asked to air it. The survey gave the TRS 109 out of 119 assembly seats, giving the Congress a paltry two seats.

There is also hush-hush talk of KCR advancing the elections by a year to early 2018 to take the opposition, weakened by defections to the TRS, by surprise.

And as things stand today, KCR has his nose ahead in the race given his manpower and money power. And yes, milk power as well.

Also read: Telangana will have a 'foreign minister' and he's the CM's son

#Telangana, #TRS, #K Chandrasekhara Rao
The views and opinions expressed in this article are those of the authors and do not necessarily reflect the official policy or position of DailyO.in or the India Today Group. The writers are solely responsible for any claims arising out of the contents of this article.