Why the Congress government in Madhya Pradesh looks like a coalition

Out of the 28 ministers, 20 belong to the Kamal Nath-Digvijaya Singh group, while eight are from the Jyotiraditya Scindia camp.

Two BSP and a lone SP MLA support the Congress government in Madhya Pradesh, besides four other independent MLAs, all of whom had contested as Congress rebels.

Managing the aspirations of the 114 Congress MLAs owing allegiance to various factions within the party gives the Congress government the impression of being a ‘coalition government’.

The much-awaited Cabinet formation in MP took place on December 25 and was a pointer to how this ‘coalition’ is being run.

Kamal Nath, the newly sworn-in Chief Minister, proved to be Santa Claus for some MLAs, but for many others, Christmas could have been better.

Here is a look at what he did:

A total of 28 ministers were inducted into the council, all with Cabinet minister rank, something that has not been tried out in MP in the past.

Even though various factions maintained a modicum of unity during the campaign and gave the impression of being united, the truth is a little different.

Each faction is given a ‘quota’ place in the Cabinet. Kamal Nath had the tough job of giving each 'faction' a quota in the Cabi=net. (Photo: PTI)

The faction leader has a right to fill the vacancy through his nominees while maintaining the general balance of caste and region.

Out of the 28 ministers sworn in on Tuesday, the Kamal Nath-Digvijaya Singh group got the bulk of the 20 quotas, while Jyotiraditya Scindia got eight MLAs inducted as ministers.

Soon after taking the oath, one of the newly inducted ministers, Gwalior MLA Pradyuman Singh Tomar, a Scindia loyalist, came down from the dais to seek the blessings of his political mentor who was sitting among the audience, after wishing the governor, his Cabinet colleagues and the CM.

The message was clear: Tomar saluted the one he owed to his presence in the Cabinet. 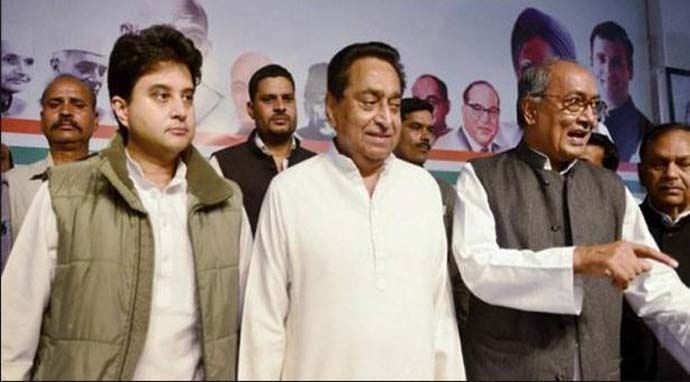 In the coming days, the MP government will witness many more tests. (Photo: PTI)

Nath had not distributed portfolios until 48 hours after Cabinet formation.

It was apparent that all was not hunky-dory and the leaders differed over department allocation.

In the coming days, the MP government will witness many more tests.

Already, there are evident signs of discontent after certain MLAs were not appointed ministers. This may play out during the upcoming Lok Sabha elections. There will also be issues in the appointment of chairpersons to boards and corporations where this faction ‘dharma’ will have to be followed.

Aware of these challenges, the CM has kept six Cabinet posts vacant and given a clear indication that those who deliver positive results for the party in the Lok Sabha elections will be rewarded with those berths in the next cabinet expansion.

Meanwhile, with 109 MLAs, the BJP, after initial attempts at destabilising the government, is now playing the waiting game. It will not let an opportunity pass if the Congress starts rocking its own boat.

Post your comment
#Jyotiraditya Scindia, #Kamal Nath, #Congress, #Madhya Pradesh
The views and opinions expressed in this article are those of the authors and do not necessarily reflect the official policy or position of DailyO.in or the India Today Group. The writers are solely responsible for any claims arising out of the contents of this article.