From BJP is a 'washing machine' to Hardik Patel 'spent Rs 10 crore on sister's wedding', it was a fiery debate.

“What kind of politics will the young netas (leaders) of India practice? Will it be a brand of politics that rises above identity?"

When Rahul Kanwal, managing editor of TV Today Network, asked this question to a panel of young and emerging leaders at the India Today Conclave 2018 in Mumbai, the audience got to hear what they wanted, and much more.

Responding to allegations of playing “caste politics”, the feisty Patidar leader from Gujarat said he did not understand how demands for employment and better education can be called that. He claimed that in Gujarat, during the recent Assembly polls, all he did was educate the voters about corruption and lack of employment in the state.

Shubhrastha’s rejoinder, though, came in the form of a taunt: "If the Patidar leader’s political motives were indeed to curb rampant unemployment in the state, then should he not practice politics under the banner of Hardik Hindustani, instead of Hardik Patel?"

Kanwal then redirected a similar question to Kanhaiya Kumar, the firebrand JNU leader, who started with a primer on identity politics vis-à-vis his own identity. He argued that when any leader talks about the progress of a particular community, he or she doesn't speak of leaving the others behind. Rather, their motive is to bring their community up to the level where others stand.

This was opposed by BJYM’s Rohit Chahal, who stated that his party’s ideology - the ruling party’s ideology - was “nation first, party second, self third”. At the same time, Chahal flaunted two maps of India, one that marks states ruled by BJP; the other that highlighted Kerala: the supposed last bastion of the Left.

She added that following the rape “Nirbhaya”, in 2012, JNU students protested against the incompetence of law and order without having known either the identity of the victim or the perpetrators.

As opposed to that, when an eight-year-old girl was raped and murdered in Kathua, Jammu and Kashmir, a demonstration was led by the Hindu Ekta Manch - headed by state BJP secretary Vijay Sharma - where protesters demanded that special police officer Deepak Khajuria (accused of the rape and murder) be released, dubbing his arrest a “jihad”. The protesters also included other BJP leaders such as Rashpal Sharma, appointed as the vice-chairman of Jammu and Kashmir State Advisory Board for Welfare and Development of the Other Backward Classes in August 2016, and Hira Nagar MLA Kuldeep Varma.

The curse of JNU

Shubhrastha, when asked to respond to Rashid’s views, accused Rashid and the others - Patel and Kumar - of participating in the politics of identity such as caste, gender and religion. Next, she proclaimed that she does not identify herself as anything more than an Indian and a Hindu. She further took a jibe at Kumar and Rashid for being students for life - a taunt that JNU students, especially the political ones, have been at the receiving end of since 2016. 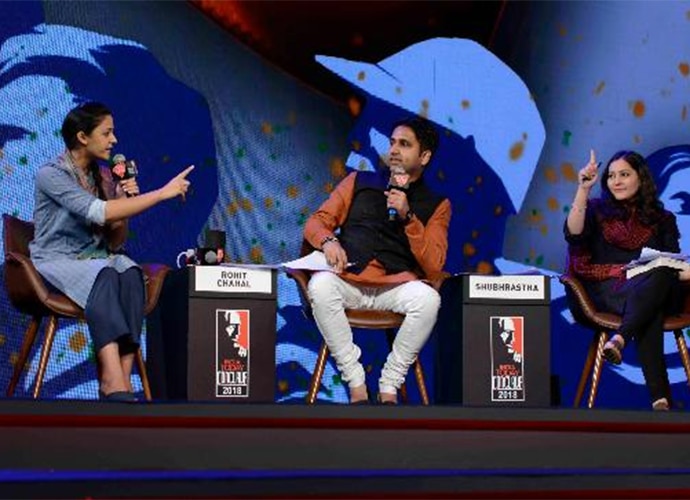 Continuing her attack, Shubhrastha, who moments earlier had said she would not get into the debate of facts and figures, started reading out gender ratios in the Politburo; in other countries.

At this point, Kanwal was compelled to ask Kumar and Rashid. Why are the two of them, like many others still stuck in JNU? On the one hand, Rashid took the “anti-intellectualism” of the Right to case by drawing a parallel with Nazism. It was Kumar, who brought some comic relief with a simple question: "If the PM did his MA by the age of 35, how am I wrong in pursuing my PhD at the age of 30?"

From mentions of PM Modi’s estranged wife Jasodhaben to talks of Left student leaders in jail, Kanhaiya Kumar once having been caught urinating in the open to [if] BJP is a washing machine (after entering which defectors from other parties come out clean), how much Hardik Patel spent on his sister’s wedding to the branding of Rashid as a “Muslim” woman - there was no dearth of counter-charges to the extent where the moderator was forced to mute everyone (when they "overshoot") to maintain decorum.

A potshot, to the joy of many in the audience, was also taken at the usual chaotic episodes of TV debates on a particular channel where panellists are loud and more than necessary in numbers. Of course, the channel was not named.

Amid all the noise, it was Hardik Patel who pointed out the double standards of the BJP and by extension the Right. While they preach “we are Indians above all”, there are countless examples of several BJP leaders including PM Modi and UP CM Yogi Adityanath proudly proclaiming their Hindu identity.