Kartarpur Corridor: Why Punjab politicians are jostling for credit over religion

The foundation stone-laying ceremony saw a scramble for recognition between both BJP-SAD and Congress.

Religion, like everywhere else in India, dominates the political scene in Punjab.

The recent past has particularly witnessed politics over the alleged sacrilege of the Guru Granth Sahib on various occasions. Reports of the Shiromani Akali Dal's alleged political link with the Dera Sacha Sauda chief and police firing at innocent people protesting against the reported sacrilege of the Guru Granth Sahib at Behbal Kalan in October 2015, killing two protesters, were all severe blows to the SAD. The party's image was further hit by the Ranjit Singh panel probe investigating the sacrilege incident in August this year.

Having played the religion card for over four decades — seen as a clear strategy to win votes — the SAD now, many believe, is almost bankrupt in terms of religious issues, especially after the Ranjit Singh Commission report.

It, however, got a breather after the Captain Amarinder Singh government allegedly, reports say, deleted some portions from Sikh history textbooks.

Now, the SAD is at daggers drawn over the Kartarpur Corridor, which holds a great deal of religious significance for Sikhs.

Interestingly, the Badals — who ridiculed Punjab Cabinet Minister Navjot Singh Sidhu when he raised the Kartarpur Corridor issue with Pakistan earlier — not only tried to capture the foundation stone-laying ceremony at Dera Baba Nanak by getting their names etched on the plate, but Union minister Harsimrat Kaur Badal will also be visiting Pakistan, albeit without any formal invitation. She will be visiting the neighbouring nation on behalf of MEA Sushma Swaraj.

With both Pakistan and India having given a green signal for the corridor — with suitable facilities in Pakistani territory to facilitate the smooth visits of pilgrims from India to Kartarpur Sahib throughout the year — the foundation stone-laying ceremony also led to a scramble for credit between the BJP-SAD and the Congress.

Both Congress and Akali leaders used the stage to take credit for the corridor's development.

While the CM rejected the invitation from Islamabad, and instead accused it of perpetrating terrorism in India, Sidhu showered praises on Pakistan PM Imran Khan.

A miffed Captain termed Sidhu's decision to accept the invitation as "his own way of thinking". 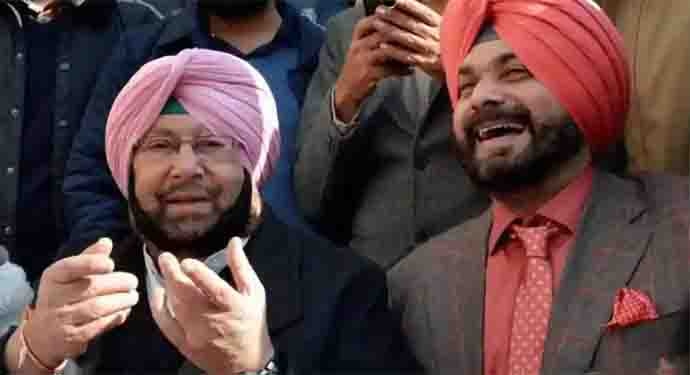 The invitation from Pakistan has created fissures between CM Amarinder Singh and his minister Navjot Singh Sidhu. (Credit: Screengrab)

Sadly, both BJP and Akali leaders (except Subramanian Swamy), who were more concerned about the sentiments of the kin of martyrs to terrorism when Sidhu visited Pakistan the last time, are now silent, as the issue will influence more voters than martyrs.

Punjab CM Captain Amarinder Singh though deserves a pat on his back, having rejected the invitation.

What has worried the Indian security agencies is Pakistan's strategy to appease hardliner pro-Khalistan outfits in the backdrop of religious sentiments.

Khalistani groups are being allegedly encouraged to attack people professing non-Sikh faiths by the ISI, with the sole purpose of disturbing communal harmony in Punjab.

With Lok Sabha elections nearing, political parties in Punjab have got another religious issue — the Kartarpur Corridor — to exploit in the elections.

But what Indian authorities need to tell the rogue neighbour is to ask it to flush out Khalistani terrorists from Pakistan, who are helping the ISI to export terror to India.

Also read: Kartarpur Corridor: Amid high drama, security concerns, what the project can mean for India

#Badals, #Amrinder singh, #Punjab, #Kartarpur corridor
The views and opinions expressed in this article are those of the authors and do not necessarily reflect the official policy or position of DailyO.in or the India Today Group. The writers are solely responsible for any claims arising out of the contents of this article.