Why so scared, Pakistan? Pak blocks its Army website to Indian users. What is it hiding?

As India presents a combative Kashmir front, why is the Pakistani army withdrawing into itself? Is it sulking? Or is there something beyond?

As tension soars between India and Pakistan, Pakistan has reportedly blocked the website of the Pakistani army to Indian users.

This seems strange — and indeed, half-baked — as the websites of the Pakistani navy and air force are still accessible from India.

The website of the Inter-Services Public Relations, the media wing of Pakistan’s armed forces, is also accessible.

So, what exactly is the Pakistani army trying to hide?

Or, what is the Pakistani army scared of? Tempers were rising between the two countries as the Indian Army recently claimed intel inputs of a massive terrorist infiltration from across the border. Security in the Kashmir Valley was strengthened; the Amarnath Yatra was called off; tourists were evacuated.

The Pakistani army was asked to take back the bodies.

BREAKING: Army releases first photos of what it says are 4 Pak Army SSG/terrorists eliminated on our side of the LoC in Keran sector over last 24 hours. Operation still on. Heavy firing still on from Pak side to assist infiltration. pic.twitter.com/LTB0OOH6fC

But Pakistan refused to do so, rejecting claims of pushing terrorists across the LoC, instead alleging that India was using cluster ammunition along the Line of Control — a suggestion strongly dismissed by the Indian army. 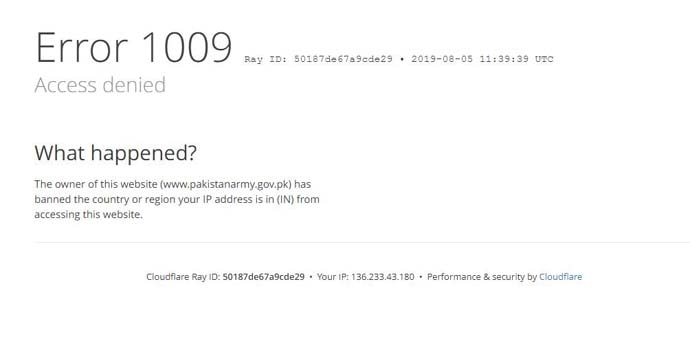 So, what's behind the block? (Photo: Pakistan Army website)

But making nonsensical claims aside, the website of the army of any country is a show of real strength — the details of weaponry are supposed to be there if updated in a timely fashion. Why would Pakistan block Indian access to this? Does it think that our intelligence officials depend on their websites to procure information?

With J&K's Article 370 now scrapped and Parliament passing a resolution to make J&K a Union Territory, Pakistan is bound to escalate the issue.

Its Foreign Office has already issued a statement condemning the 'unilateral' step. "As party to this international dispute, Pakistan will exercise all possible options to counter the illegal steps," the statement said.

In that case, will it also explain why it has shut its website?

What 'illegal steps' are they hiding?