Let's not politicise the issue.

The high participation of students in Class 10 and 12 Board exams in Kashmir is an achievement that belongs to the students alone. It is wrong for any political interest to try to capitalise on the initiative and efforts of the students.

The last couple of months saw intense debate in the Valley over the decision of the state government to hold the Board exams after the prolonged shutdown in the Valley, during which all educational institutions were closed.

In an unprecedented decision, the state decided to hold the Class 10 and 12 Board exams twice. It was decided that the exams would be held in November, covering only 50 per cent of the syllabus. Those who failed to appear in the exams in November would have to appear in March, in which the full syllabus would be covered.

The date-sheet was announced when the situation was intensely bad in the Valley. Kashmir was observing a strict hartal, coupled with curfews and regular incidents of stone-pelting. For students of other classes, mass promotion has been granted by the government.

The Board examinations for Class 10 and 12 began in the Valley on November 14. After four months of shutdown, 99 per cent students appeared for the papers. For the Class 12 examination, the figure stands at 94 per cent.

Students deserve huge credit for braving hardships and appearing for the exams. After the high participation of students in the effort, it is wrong for any quarter to politicise the situation in any way.

The social structure at the grassroots-level is interlinked with the school schedule. Students have braved the burning of schools to appear for the examinations. The political one-upmanship over the high participation of students is not a fruitful exercise. It is wise to give credit only to the students.

The Class 10 and 12 exams were held amid tight security arrangements made by the police and paramilitary forces in the Valley.

Public transport was not plying due to the ongoing hartal. As a result, it was an arduous task for thousands of boys and girls writing the Board exams to reach the examination centres. 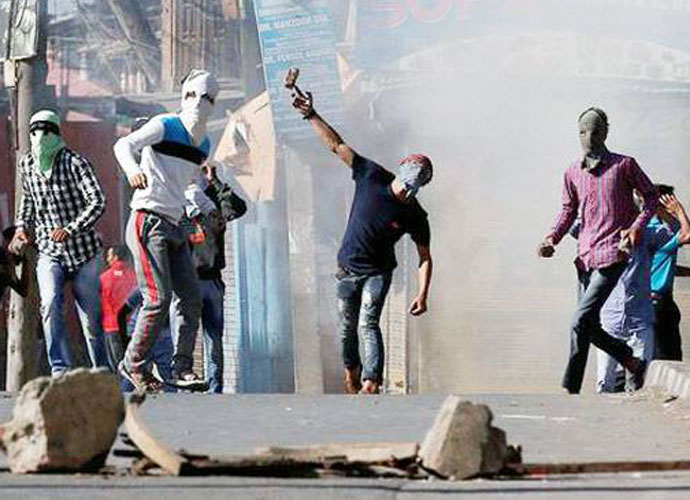 Incidents of stone-pelting were reported in the districts of Shopian and Pulwama. (Photo: India Today)

While the affluent students car-pooled, those from unprivileged backgrounds managed to reach the examination centres by starting from their homes in the early hours of the morning. They were apprehensive over heightened security concerns.

According to the Directorate of School Education Kashmir (DSEK), 558 centres were allotted for the Class 10 exams, while the government had set up 484 centres for students appearing for the Class 12 exam.

Fortunately, examinations have been held till now without any untoward incident. According to official figures, the highest participation was recorded in Anantnag district - one of the worst-affected in the unrest in the Valley. Here, 96.1 per cent of students appeared for the Class 12 Board exams, followed by Srinagar at 94.3 per cent.

Another district where students surprised everybody with high participation is Kulgam. This too was among the epicentres of the current unrest. Here, 92.98 per cent students participated in the examination.

At almost all centres, parents waited outside the examination hall while their wards sat for the examination. It is already biting cold in the Valley.

Most students said they decided to give the papers this time because of confusion over the situation in March.

Many students reported they felt scared to see the huge deployment of security forces outside the examination centres. At many places, parents were seen convincing their anxious children to go inside the hall and take the exam without any fear.

Parents later confided to the local media that even they were fearful while their children completed the examination. But they decided to brave it out, and encouraged their children.

Students said that while the question papers were easy, the major problem was lack of transport facility, and heating arrangement inside the centres.

Incidents of stone-pelting were reported in the districts of Shopian and Pulwama. The police have imposed Section 144 in and around all exam centres. A few exam halls had to be shifted to safer locations after some youths pelted stones.

Most centres had been declared hyper-sensitive, and the Army had also been called in to maintain peace.

The question papers and answer sheets had earlier been taken to the various exam centres under protection of the police.

#Board Exams, #Kashmir Valley
The views and opinions expressed in this article are those of the authors and do not necessarily reflect the official policy or position of DailyO.in or the India Today Group. The writers are solely responsible for any claims arising out of the contents of this article.