Kashmir writhes under lockdown at gunpoint, Delhi remains in denial

This article has been co-authored by Maariyah Siddique and Ieshan Wani.

As tension escalates for the fifth day in the Valley, the death toll in Kashmir officially mounts to 34. Adil Ahmad Mattoo, who was injured in police firing at Bijbehara in south Kashmir, succumbed to injuries last night at Shri Maharaja Hari Singh (SMHS) Hospital in Srinagar.

While the deceased include a 13-year-old boy, a 24-year-old woman, and many young protesters, the injured - about 1,300 - are full of children, women and even passers-by who were not involved directly in the protests.

Among the civilians are those killed either by immediate police firing or succumbing to their injuries during treatment. According to locals, many of them died due to delayed treatment as officials kept attacking the ambulances on their way to hospitals.

Why such brute force to quell unarmed protesters?

Also read: Why Burhan Wani's death is no victory for the Indian State

On one hand, Jammu & Kashmir chief minister Mehbooba Mufti questions the use of "disproportionate force" against civilians and appeals to locals to maintain calm; on the other, she lets Kashmir go unrepresented in the high level meeting called by the Union home ministry on Tuesday (July 12) morning. 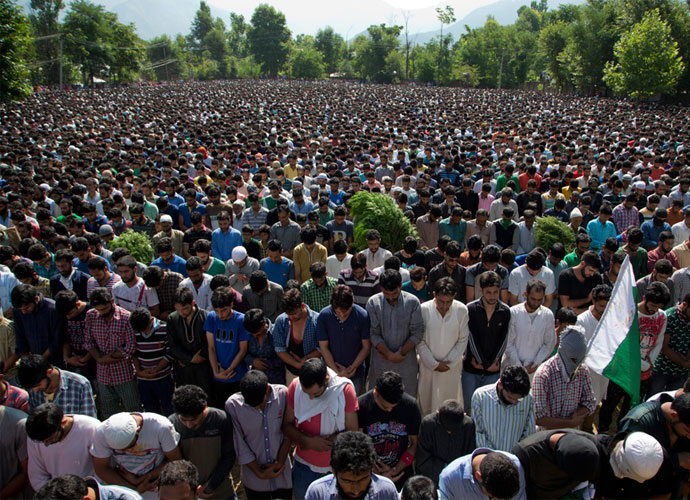 Burhan Wani's killing triggered an unprecedented number of mourners flocking to his native village in Tral, with back-to-back 50 absentia funerals.

It is sensitive of her not to be leaving the state at such a crucial moment, but why couldn’t she arrange for a video participation, an arrangement pretty common, especially in matters of high importance.

Mobile internet services remain suspended for the fifth day in a row, and the whole of south Kashmir suffers total blockage of communication lines.

Yet, after a temporary two-day suspension of the Amarnath yatra, pilgrims from Jammu resumed the yatra amid heavy security.

Also read: It's mourning in Kashmir

Public life is stagnant as shops, private establishments and business enterprises remain closed for the fifth day. Public transport continues to remain off-the-roads and only private vehicles, in scant numbers, can be seen on the streets.

A visibly complete lockdown prevails in the entire Valley.

While the Union home minister Rajnath Singh claimed on Sunday that the situation in the Valley had been brought "under control", the death toll rose to 23 from 19.

The sudden unrest sparked off by the killing of the 22-year-old Burhan Wani also triggered an unprecedented number of mourners flocking to his native village in Tral, with back-to-back 50 absentia funerals.

Massive protests have rocked the state. With a fresh batch of 800 CRPF men to be dispatched to the state, security is being beefed up in the Valley.

Major hospitals across the districts fearing a shortage of staff and scarcity of equipment have declared a medical emergency.

Hospitals are witnessing an uncontrolled rush of crucial injuries and emergency cases. Hospital beds are filled with those who have lost their vision permanently, those with severe muscle and bone injuries, and those with "injuries in vital organs", according to reports from local news agencies. Major hospitals fearing a shortage of staff and scarcity of equipment have declared a medical emergency.

As per ground reports, it is known that forces even tried to barge into hospital complexes and tried upsetting the order of things. Police inside the buildings tried to meddle with the staff while admitting patients, leading to clashes between patients’ families and officials.

"Teargas shelling was done which caused severe sufferings among those with COPD (lung disease), who were being managed in emergency rooms. This is in gross violation of international laws," said Dr Aadil Ashraf, president, Resident Doctors Association, SMHS, Srinagar.

Ashraf, along with associates at the hospital, expressed serious concern and has lodged a strong complaint against harassment of hospital staff on Sunday evening.

"The staff has been working tirelessly without any breaks in the emergency section but still we are having a shortage of staff," added Ashraf. 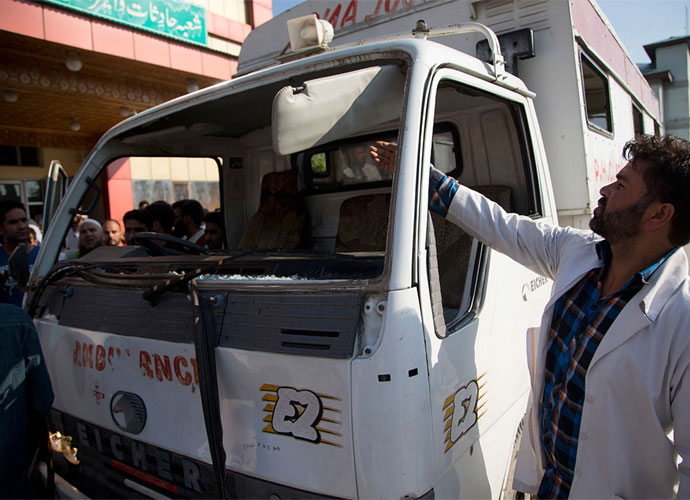 He, along with the associated staff, is constantly reaching out to the victims via the Facebook page of Resident Doctors Association of SMHS, requesting all resident doctors and paramedical staff to come to hospitals in whatever ways they can.

Due to the continuous imposition of curfews in several districts, the locals complain of running out of their rations. "Earlier in the morning, we were warned by the officials against stepping out of our homes or strict action will be taken against us," said Aasiya, a resident of Bandipora.

An ambulance carrying two injured was attacked by police forces Monday evening as it passed through Bijbehara in Anantnag district of south Kashmir.

The vehicle was obstructed and glasses were shattered while on the run. One of two injured is being treated for severe abdomen and leg injuries while other succumbed to injuries last night.

"I have talked to my family in Nowshera and they are very scared. My two daughters who are both under ten years of age haven’t slept for nights, as they fear that due to an absence of male members in the family there is no one to protect them," says Shehzad Shafi, a Kashmiri shop owner in Kolkata, who is stuck in the city due to cancelled flights.

"My relatives stay in Kulgam and there is no way they can reach my family in Srinagar at the earliest, so I am really worried," says Shafi. He has been waiting for normalcy to return so he can make his Eid visit back home in Nowshera, a few kilometres north from district headquarters, Srinagar.

Meanwhile, three versions of the Burhan Wani story have been circulating on various TV channels for the past four days.

The first was: Burhan’s indulging in lavish "love affairs" led to his death as one of his girlfriends, unhappy with her relationship with the young man, became an informer for the police.

The second version: Burhan is being lionised by the Kashmiris and that is only their misjudgement of a local poster boy who wasn’t even involved in any serious "liberation" activities.

The third and the latest one: "Pakistan is behind the terrorism in Kashmir."

Yes, let us keep playing the blame game when we are incapable of bringing a situation under control. Waiting for more creative opinions on why Kashmir burns, while a five-year-old victim of pellet injury waits to be taken care of in a short-staffed hospital left without working equipment in Srinagar.

For once, keep aside your religious bias.

For once, forget your boiling pot debate on nationalism.

And for once acknowledge the fact that deeming something "right" and "wrong" is more than just a matter of words.

It is a grave one.

Let’s address, discuss and settle it soon, but in an informed manner.

#Human Rights Violations, #Kashmir, #Burhani Wani
The views and opinions expressed in this article are those of the authors and do not necessarily reflect the official policy or position of DailyO.in or the India Today Group. The writers are solely responsible for any claims arising out of the contents of this article.