Calls for azadi can dangerously tilt Kashmir towards barbadi

No hope for normalcy as state dances to delusional narrative of freedom.

In its search for the so-called azadi (freedom), Kashmir is looking at a prolonged period of barbaadi (destruction).

The turmoil that started in July this year is leading the state down an abyss.

Till three decades ago, Kashmir's grievances against the Indian government were political. It chose the gun to resolve these grievances. It re-wrote its own destiny.

Today, the gun has become the defining tragedy of Kashmir.

In the last few years, the Valley was finally hoping for lasting peace, as conflict fatigue set in among people.

Tragically, Kashmir is again allowing itself to become a playfield for Pakistan's proxy war on India.

The new phase of violent protests in the state is marked by the presence of militants mixing with protesters.

The Valley is again on the brink of abandoning a political solution for its disputes. This should worry Kashmiri Muslims more than it worries the average Indian.

Also read: How stone-pelting in Kashmir almost killed my father and me

On July 31, Abu Dujana, a top Lashkar-e-Tayyeba (LeT) commander, appeared at a huge rally at Kareemabad in Kashmir's southern district of Pulwama.

The rally was held to pay homage to protesters killed in violence in the aftermath of Hizbul Mujahideen commander Burhan Wani's encounter. Dujana, a Pakistani, showed up with other LeT militants.

Many political activists, religious and social leaders gave inflammatory speeches at the rally.

Top police officers said not allowing the rally could have caused serious law and order issues.

Unmindful of the consequences, the Kashmir mob is finding role models in militant commanders.

Thousands of Kashmiris are marching to a delusional narrative of azadi. The toxic narrative is dictated to them by militants and separatists whose strings are pulled by Pakistan.

For almost three decades, the political grievances of the Valley have been given a militant charge by Pakistan. The grip is becoming deathly.

If the situation does not improve in the next few months, thousands of scared Kashmiri Muslims will be seen running out of the Valley, preferring to settle elsewhere in India to seek a secure future for their families.

Kashmiri Muslims bear long scars and wounds from the conflict-ridden region. Their emotions are being deliberately and systematically roused, and they are being led to disaster.

Kashmir is not stopping to think of the fate of the large, wasted regions in Pakistan and Afghanistan where terrorist organizations like LeT and Hizbul Mujahideen have held sway.

Voices within Kashmir who can call for reason or caution have fallen silent out of fear. 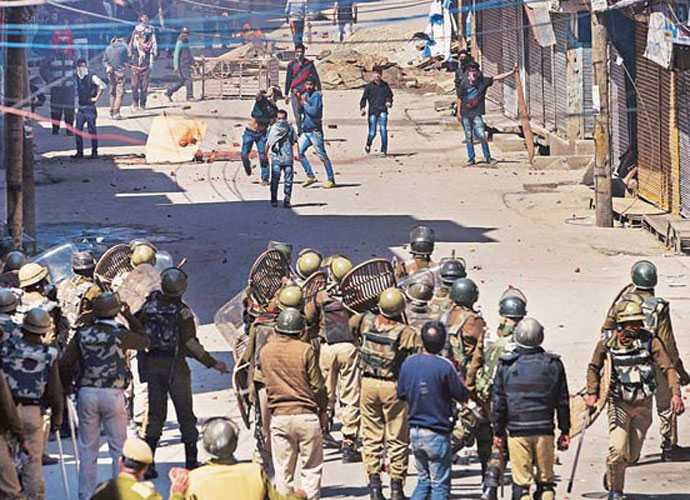 The new phase of violent protests is marked by the presence of militants with protesters.

Kashmiris who don't approve of this mayhem are frantically trying to keep their children and family protected from the searing flames burning their homeland.

The developments are distressing. It is Kashmiris themselves who must view these developments with alarm, and protect their motherland from going down a ruinous path.

In the late hours of August 1, the house of J&K education minister Naeem Akhtar in a plush neighbourhood of Srinagar was attacked with a petrol bomb.

On July 31, a mob of protesters in Anantnag forced National Conference (NC) leader Iftikhar Misgar to quit the party and join the freedom movement.

In a video that went viral in the Valley, Misgar was seen with the protesters, shouting slogans such as "hum le ke rahengay azadi (we will have freedom), Bharat ka jo yaar hai, gaddar hai, gaddar hai (whoever befriends India is a traitor)" and "Bharat ke aiwanon mein aag laga do, aag laga do (set fire to the constitutional institutions of India)".

Newspapers in Kashmir and leading media houses from mainland India reported that Misgar has quit the NC and joined the separatist movement.

Many of them did not mention that Misgar was bullied into shouting azadi slogans and forced to announce that he was quitting mainstream politics.

The NC leader admitted in private that the mob charge made him fear for himself and his family. Misgar lives in Anantnag, the epicentre of the ongoing protests.

The newspapers of Kashmir are owned by men with powerful relatives and influential linkages in the political establishment of the state.

The reasonable voices in these media houses have fallen silent because the consequences of speaking out or disagreeing with the mob can be ugly.

Kashmiri newspapers are reporting only the azadi frenzy. They are not commenting on the consequences of this treacherous tango with terrorist organizations.

The ordinary Kashmiri is caught in a grinding situation.

Also read: Pakistan should leave India alone in finding a solution for Kashmir

A few days ago, the state's United Hurriyat leadership called for opening of markets after 6pm. Traders desperate for business opened shops, kiosks and filling stations.

But the police forced shopkeepers and traders in many areas to keep shops shut after 6pm. This was done to prevent the writ of separatist leaders from running in the Valley.

Shopkeepers loudly protested the "high-handedness" of the police. Nobody dared to condemn the Hurriyat, which has dictated the shutdown in Kashmir for nearly a month now.

In separate incidents, groups of stone-pelters also targeted business and commercial establishments in different parts of Kashmir that opened after 6 pm.

The concerted effort in many quarters is that the Valley should not return to normalcy.

At various rallies, parents of youth killed or injured during violent protests are called to address the crowd and keep the shahadat (martyrdom) sentiment alive.

Post Wani's killing, loudspeakers in the mosques of Kashmir start blaring songs of shahadat after evening prayers, urging the youth on the path of martyrdom.

The call is straightforward. The mosques urge the faithful and the pious to fight for the azadi of Kashmir.

Among the songs that play in mosques across the Valley, one can hear the strains of Pakistan's Qaumi Taranah: "Pak sarzamin shad bad…(blessed be the sacred land)."

Mosques are fanning passions among the youth, not letting the fires that are burning Kashmir be doused.

In the last few days, when there was a slight relaxation in curfew, rumours were fuelled from some mosques in Srinagar that five or six people had been killed in the distant villages of Budgam or Anantnag.

Again, the call was explicit. People must come out and protest.

The aim is clear.

As protests continue and provocation mounts, security forces will take retaliatory action. Some protesters will die. Kashmir will keep counting its dead. It will continue to boil.

#Pakistan government, #Burhani Wani, #Kashmir
The views and opinions expressed in this article are those of the authors and do not necessarily reflect the official policy or position of DailyO.in or the India Today Group. The writers are solely responsible for any claims arising out of the contents of this article.