Here's why joining Pakistan is not an option for Kashmiris

Our neighbouring state has dealt brutally with Balochis seeking azadi.

Kashmir is on the boil again with predictable reactions from all sides.

The Kashmiris believe they have a cause, but its definition is not clear. They cannot be independent.

Joining Pakistan is not an available option. If they really want to join a radicalised, terrorist-ridden state in which Muslims are killing each other, Sufi shrines are attacked and Shias killed by Sunni jihadis, it will mean "Kashmiriyat" and Sufism are defunct.

The yearning for azadi by the Valley Muslims is not easy to grasp or even appreciate, as besides being amorphous it has no objective basis. Constitutionally, J&K already has substantial azadi.

Indians at large can buy property in far-off Switzerland but cannot buy land or property and settle in J&K. This special status has unfortunately hindered integration of the Valley Muslims with the rest of the country and has kept alive separatist sentiments.

How much autonomy has Islamic Pakistan given to Pakistan-Occupied Kashmir's (POK) Muslim population, even without terrorism, infiltration or external aggression from Indian soil?

Pakistan is allowing an outside power - China - to entrench itself in POK, even though China is suppressing its own Muslim population in adjacent territory.

Why don't the Valley's Muslim leaders, who press for more contacts with POK to affirm the historical unity of J&K and for preserving cross-LoC people-to-people affinities, question the fictitious azadi there and demand real autonomy for their putative brethren across.

Also read: How a worse tragedy is playing out in Kashmir hospitals

Is it that Islamic Pakistan has the right to deny freedom or self-rule to POK Muslims but non-Islamic India must grant it to the clamouring Valley Muslims? Is the azadi demand then a political aspiration or an expression of religious identity?

The Valley Muslims should actually value affiliation to a state that for all its deficiencies shows a remarkable tolerance of political dissent stretching even to sedition, and deploys force within limits.

It has used F-16s, artillery and tanks to crush opponents in tribal areas, causing massive civilian displacements to boot.

How much autonomy has China given to the so-called Tibetan Autonomous Region?

Unlike in Tibet's case, India has not made demographic changes in J&K, settled outsiders there, interfered in local religious practices, destroyed religious sites, imposed Hindi on the people and generally interfered with their cultural practices.

No real leader of the Valley Muslims is in forced exile abroad like the Dalai Lama.

India has not done in J&K what the Chinese have done in East Turkestan where Hans have been settled in large numbers and the practice of Islam curtailed severely. 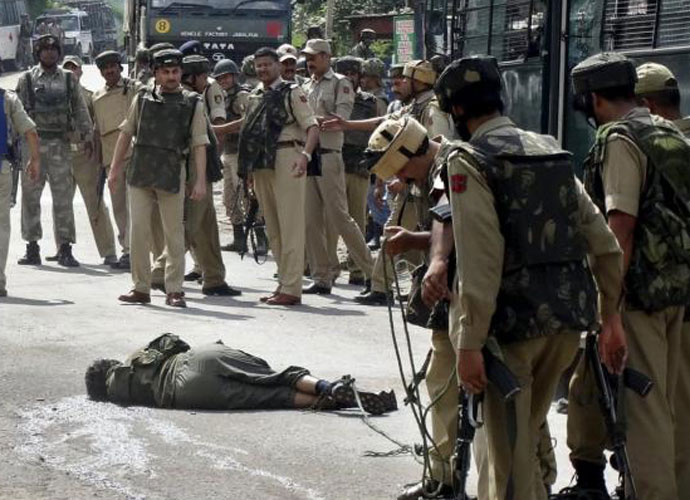 The Pakistanis are, as expected, fuelling the turbulence in the Valley.

The critique that the Valley Muslims have been denied the fruits of Indian democracy is not entirely tenable in view of the disturbed conditions in the state since decades.

Terrorism puts democracy on trial as we see in Europe after multiple terrorist attacks on its soil.

France has extended the state of emergency once again after the Nice attacks and has to grapple with concerns that tougher laws needed to combat terrorism may affect democratic freedoms.

In J&K's case, the terrorist problem is of a much higher magnitude as it is state sponsored by Pakistan.

The democracy-avid Valley Kashmiris should have, therefore, risen against the terrorists, the separatists and their sponsors in the name of democracy rather than support their political agenda through ethnic cleansing of Hindus, constant hartals, demonstrations, street violence, stone-pelting, exposing children to law and order enforcement, waving of Islamic State flags, treating terrorists as heroes and obstructing military operations against them.

Even after recent elections have been demonstrably free and fair and a unique experiment of a coalition between a soft separatist party and a strong nationalist one - possible only under a democracy - the grievance about the "democratic aspirations" of the people being thwarted continues to be ventilated.

The word "alienation" to describe the state of mind of the Valley Muslims is attributed to Delhi's misguided policies, overlooking the reality that these Muslims have in their majority not connected fully with Delhi politically, emotionally, ethnically and religiously as part of their own version of "the unfinished agenda of Partition".

The Pakistanis are, as expected, fuelling the current turbulence in the Valley, unconcerned about repercussions on ties with India, with their PM Nawaz Sharif treating terrorist Burhan Wani as a hero, declaring him a martyr, pronouncing that Kashmir will one day be Pakistan's and allowing jihadi leaders to demonstrate in Islamabad against the visit of India's home minister.

Also read: Why Kashmir's stone-pelters mustn't be seen as terrorists

It is the same Sharif who is supposedly committed to genuine friendship with India.

Our Pakistan apologists will dutifully explain his provocations as covering his flank against the military. The Opposition will seek to embarrass the government for failure of policy.

Some civil society figures, moved by self-guilt, will rue our collective failure to win the hearts and minds of the Kashmiri people.

They must know of a tested political strategy for winning the hearts and minds of people in overwhelmingly Muslim majority areas under non-Muslim authority, even if secular and democratic.

Their counsel could benefit Europe too in its less challenging task of winning the attachment of its small Muslim minorities to its liberal democracy, one in which it has not fully succeeded so far.

#Burhan Wani, #Kashmir Unrest
The views and opinions expressed in this article are those of the authors and do not necessarily reflect the official policy or position of DailyO.in or the India Today Group. The writers are solely responsible for any claims arising out of the contents of this article.