Let's find the reasons for life, not death, in Kashmir

Can the conflict be resolved by the man with a 56-inch chest who has single-handedly transformed India’s global image?

In a plush farmhouse in south Kashmir, the epicentre of the horrific turmoil of 2016, a group of affluent Kashmiri men have sat down with bottles of rum and soda.

As they begin filling their glasses up, they are relieved that today at least, they have been able to get out of Srinagar and reach the farmhouse. The strict curfew and the agitation, they say, had made it impossible to get out of the house.

After a few hours, they are drunk, and their drivers are taking them back to Srinagar in their swanky cars.

The business of some of them has been impacted by the ongoing unrest. Their children are safe, pursuing higher studies or working in mainland India or abroad.

While these men have been drinking, the road from Pahalgam to Aishmuqam and onwards to Mattan wears a busy look. Thousands of Kashmiri men are making their way back to their homes with their ponies.

Despair is writ large on their faces.

Also read: If it's not war with Kashmir, where's the compassion, Modi?

The Amarnath yatra has been impacted by the unrest. These Kashmiris made earnings for a whole year from the yatra. Now their hopes of a comfortable income from the season are dashed. 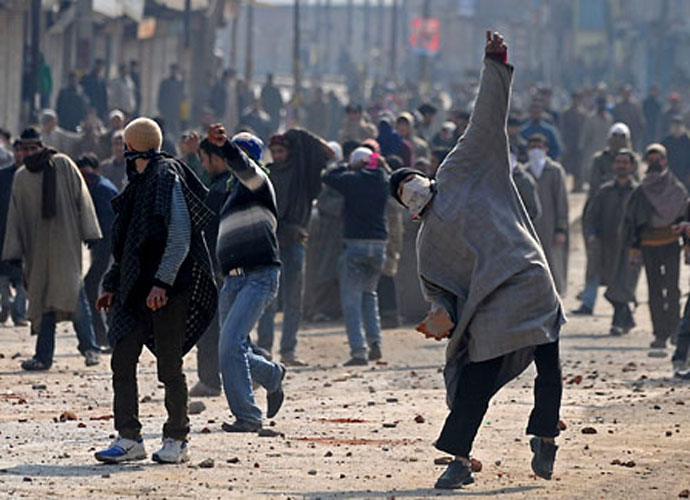 Is there a way to solve the Kashmir crisis?

For want of passengers, flights are getting cancelled. Affluent men who can afford to get away are trying to fly to Delhi. Some have already moved out. Life is difficult without internet, newspapers, mobile phone, and in some areas, even water or electricity.

Also read: How a 'Mukhbir' Pandit looks at the Kashmir siege

In a village in Aishmuqam tehsil, some villagers are sitting in the mellow afternoon in the house of the village sarpanch. They are angry at themselves.

“We should have gone all out this time and wrested azadi. Baar baar marne se behtar ek hi baari marna tha. Jo log bachte, woh azad rehte (We should have died once, than over and over again. Those who would have lived would have been independent),” they discuss among themselves.

In Kralpora, on the outskirts of Srinagar, some men and women are standing at the gate of a house, discussing the current situation. Passers-by hear a man speaking loudly. “When you set out on a protest, trying to attack the police station or the army camp, will they not shoot you? Will they give you mithai instead?” he questions.

In a village near Awantipora, a doctor working with the government says all the protestors should be dealt with sternly when they set out to attack the army or police posts. “These people, who support a militant, are actually the ones who do not let the Kashmir conflict end,” he says.

Near Bijbehara, villagers speak in hushed and pained tones about the horrendous treatment meted out to a poor village lad. The 14-year-old, a protestor, was chased and caught by the police.

The police was ready to release him if the sarpanch assured that the lad was from a poor family, and would not indulge in violence again.

“The sarpanch demanded Rs 40,000 from the family. The boy’s father, a daily wager, had died a few years ago. His mother could manage to pay only Rs 10,000 to the sarpanch. This is the why the poor revolt in Kashmir. The corrupt and inhuman system grinds them,” discuss the villagers.

In a village near Bijbehara, villagers had to take the body of a young MBA student on a cart to the hospital. They say that a protest was on across the Jhelum. This youngster, who was home for Eid, was standing on the other side of the river, watching it.

Villagers say that after the police confronted and dispersed the protestors, the SHO targeted this youth standing on the other side, and shot him. As the youngster fell, the SHO did not allow the family to get an ambulance. The youth had to be rushed to the hospital on a cart, where he was declared dead.

Harinder Baweja writes in the Hindustan Times of her experience of reporting from Srinagar in the violence following militant commander Burhan Wani's killing. She and her colleague Toufiq Rashid had barely reached the outskirts of Srinagar when a group of about ten boys stopped their car.

“The minute they find out we are journalists, they start punching our driver. We try and argue: we are here to understand your rage, to report on the agitation but soon realise that even ten youth can have the mentality of a mob. They are not interested in speaking to the media. We are ‘Indian dogs’,” she writes.

She found groups of 10-20 stone-wielding youth standing by the roadside every 200 metres on the way from Srinagar to Pulwama. The boys reprimanded Toufiq, a local Kashmiri, because her head is only eighty per cent covered.

At other places in Kashmir, there are stories of kindness and grace.

Residents of Lal Mandi and Wazir Bagh had organised a free kitchen for attendants of the injured at Lal Ded Hospital, and other stranded people.

The Kashmiris have been making efforts to provide free medicine and food in all the hospitals.

The Kashmir Chemists and Druggists Association have been offering medicines for the injured and needy, with mobile numbers circulated on WhatsApp and Twitter for easy connectivity.

The Kashmir Vegetable Dealers Association had distributed free vegetables in downtown Srinagar, among the pockets most rocked by protests in the capital city. The association has also been offering free vegetables at Batmaloo, and had provided the number of their Srinagar contact.

However, elsewhere the greed of man persists.

In the posh Civil Lines, vegetables have been selling for twice and thrice the regular price, as vendors milk these tragic times.

Many petrol pumps are closed, and small shopkeepers are selling petrol at Rs 100-120 a litre.

A prominent Kashmiri observer notes on Twitter that during the peak of militancy in the 1990s, some locals used to blackmail businessmen that they would be labelled as "mukhbirs" (informers) in newspapers if they didn't cough up money. These times are back, he writes.

A journalist driving back to his office from Pampore sees six-seven-year-olds in the back of a trolley. The boys, still in primary school, are shouting over and over again, “Hum kya chahtey, azadi”.

An astute Kashmiri observer wrote in a series of tweets:

"How is that while the elite & privileged political class keep shouting on TV studios about 'Kashmir conflict' their kin is secure & away?

"Go check the demographic data of victims of recent violence in Kashmir. Is there even a single one from the elite or political class?

"Don't be fooled by political wannabes crying hoarse on the Kashmir tragedy. Their shouts are aimed at political progression."

I wrote to him: Thank God some Kashmiri is finally admitting this. But you state it from the anonymity of a fake Twitter handle?

“You want me shot dead?” he posted back.

These are the snapshots of Kashmir today. After the spate of killings ends, the Valley will move into normalcy. Vested interests on both sides of the border will continue to feed on the continuity of the Kashmir conflict.

Can Kashmir be transformed by the man with a 56-inch chest who has single-handedly transformed India’s global image?

An eminent Kashmiri writes on Twitter what millions in the Valley and in mainland India are feeling today:

If you are a well-wisher of Kashmir, find reasons of life here, not reasons of death. Resolve, not instigate.

#Burhani Wani, #Kashmir
The views and opinions expressed in this article are those of the authors and do not necessarily reflect the official policy or position of DailyO.in or the India Today Group. The writers are solely responsible for any claims arising out of the contents of this article.