Our forces guarding the Amarnath Yatra do a stellar job while battling extraordinarily hard conditions. For the Yatra to thus be cancelled, despite such security, the danger had to be huge.

The Amarnath yatra getting called off in Kashmir clearly indicates that the security scenario was indeed dire.

This is mostly because the security for the yatra through July left little scope for those who might have wanted to attack it.

Indeed, the most effective security is never visible to yatris and other observers. For example, highly trained snipers, the sort one sees in spy thriller movies, are placed in bunkers on ridges high above the routes and the shrine itself. These snipers — and all the other thousands of security personnel — deserve kudos.

Challenge, Accepted: From icy winds to living on rock faces, the life of soldiers guarding the yatris is difficult. (Photo: Reuters)

While the yatra was underway, the snipers scaled rock faces, carrying heavy gear every day, to climb into their bunkers at heights where breathing is a challenge. From there, they would scan the mountains for any suspicious activity.

They remained at the mercy of the weather from almost dawn to dusk because at such an altitude, not only the wind or rain but even the sun can sting.

In bunkers perched on ridge-tops near helicopter routes, the jarring drone of rotors can be deafening, not to speak of the billowing gusts of wind from those rotors.

The noise is incessant, for a chopper passes over the base camp and the yatra route every few minutes or, at times, seconds. If visibility permits, chopper ferries continue from 5.30 AM to 5.30 PM with the rotors whirring non-stop as five or six passengers are bundled out or in within a few seconds at each landing.

Security for the yatra has become a bigger challenge over the past couple of years, especially due to the increased recruitment in pan-Islamist groups such as Ansar Ghazwat-ul Hind and Islamic State Jammu and Kashmir.

Just eight weeks after pan-Islamist militancy took off in the valley, a civilian bus carrying yatris from Gujarat was attacked on July 10, 2017, killing eight devotees. 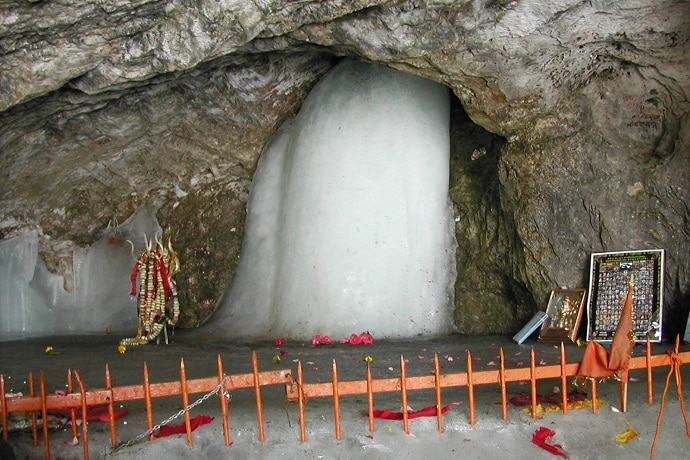 Guarding the pure: The holy shrine has always been a target for terrorists in Kashmir. (Photo: Wikimedia Commons)

Last year, at least three security threats were successfully prevented. One of them could have been disastrous if the threat had not been defused under the leadership of the then-Corps Commander, Lt Gen AK Bhatt.

Militants controlled by Pakistan did attack the yatra a couple of times over the past couple of decades. But they were kept on a short leash thereafter since the ISI is intensely conscious of international perceptions.

The yatra on the eastern edge of the Kashmir Valley brings together several thousands of people from across the country daily. One hears Gujarati and Telugu, Kannada and Bangla, and sees remarkable socio-economic diversity.

Security personnel too come from all parts of the country and from various castes and religions — it is heartwarming to see a devotee go up to a security man with a Muslim name-plate to shake his hand with a big smile and words of thanks.

For a day or two they spend on the actual yatra route, devotees put up with the inconvenience of a tent and use makeshift tin cubicles as toilets. Truly exemplary: The soldiers on day-duty wake up at 3 AM — and guard their posts till midnight. (Photo: IANS)

But the security men deployed there make do with such arrangements for almost two months at a stretch.

The temperature in these tents, pitched near the 12,600-foot high shrine, dips well below zero at night. When it rains, as it often does, even daytime is miserable.

Every evening, an exhausted soldier can expect more or less the same meal — dal, vegetables, rice and rotis. There is little variety in the vegetables since only a few fresh vegetables, such as capsicum and potatoes, are available.

Yatris at least have access to lavish feasts at some of the myriad bhandaras (community kitchens for pilgrims). A few of these can be considered fit for a wedding with a menu featuring papad, salad, desserts, pulao and a variety of tandoori rotis to accompany several dishes.

Yatris remain strictly vegetarian for a few days before and during their pilgrimage — soldiers do so for the entire period. Whatever their culinary or cultural background, they abstain from liquor or non-vegetarian food during the entire two months of their yatra duty.

The hours are arduous too. Security personnel remain on duty at night too because a few pilgrims start or end the trek in the middle of the night, and others travel to and from the base camps at night. Eat, pray, love: Devotees have a variety of vegetarian cuisines at the bhandaras. The forces stick to plain fare. (Photo: Youtube/Vikram Kumar)

Soldiers on day duty rise by 3 AM and remain on duty till midnight because the first pilgrims of the day begin ascending the 523 steps to the shrine-cave at 5.30 AM. Throughout the weeks of the yatra, aarti begins at 6 AM.

Not only the yatris but our security forces need to be lauded for their devotion too, albeit to their duty.

Also read: The chaos in Kashmir is a result of Kashmiri politicians always choosing their own gains over larger good

Post your comment
#Security forces, #Terrorism in kashmir, #Indian Army, #Amarnath yatra 2019
The views and opinions expressed in this article are those of the authors and do not necessarily reflect the official policy or position of DailyO.in or the India Today Group. The writers are solely responsible for any claims arising out of the contents of this article.