On Kashmir: I felt like an 'anti national' speaking for Jewish rights in Hitler's Germany

A pellet gun for a stone will breed a cycle of hate and violence that will strip us of all humanity.

The reality in Kashmir has always been crazily complex: this isn't some good guys versus bad guys spaghetti western where the guys with the guns are good, those with stones are evil. The water-lines in the Dal lake have long since been bloodied and blurred and we don't really know where hope lies in the darkness.

"Misguided" youth who won't think twice before standing in front of an Army jeep, separatists who won't test their support in an election but will take orders from a dangerous neighbour across the border, Army men who see the locals as "subjects" not citizens, politicians who fiddle while a valley burns, a bureaucracy which is status quoist, a media which is frighteningly polarising, those waving the flag of hate in the name of nationalism , those who do a head count of civilians killed in encounters but not of jawans, terrorists who treat death as a game: is there anyone in and outside Kashmir today who can hold their head high with a clean conscience?

A moral and political vacuum stares at us and yet the gravity of the situation or the urgent need for imaginative solutions is escaping us. Resume the political dialogue, Omar Abdullah tells me on a TV show. Right, but a dialogue with whom, I ask? Can a dialogue be had with a gun pointing to the head? Or with separatists who will simply echo Pakistan's line? Choose between tourism and terrorism, the prime minister tells us. Is is really that simple a binary, Mr Modi? Will the end of terror offer a political resolution to a dispute that has a 70-year bloody history? We want to give good governance, Mehbooba Mufti tells me. Of course you do, but it's your government, so where is the healing touch that your father spoke of?

We are losing Kashmir, warns Farooq Abdullah, the stone pelters are fighting for resolution of the problem. Yes, Dr Abdullah, but why are we losing Kashmir I ask: isn't it because for the many years that you were in power, you did little to resolve the issue. Hey, weren't you the guy who collaborated with the Congress in the rigging of the 1987 election that started it all?

Kashmir is the "core" issue, screams Pakistan: so it is, but how do you address a core issue: surely not by pumping in more guns and terrorists in the name of religion? How can you be a victim of terror on one border of your country and a perpetrator of terror on the other?

Containment hasn't worked, it's now time for an all-out war, a retired general tells me. Really sir? War with whom, your own citizens in the Valley, or with a nuclearised neighbour? We are living in a concentration camp for two decades, a Kashmiri intellectual tells me. Right you are sir: but how many Kashmiris have spoken out against the culture of violence that has forced civil society into a prison zone?

Don't forget us Kashmiri Pandits and our plight, a familiar voice tells me. No, we must never, but do we forget that a vast majority of those innocents killed in the violence are local Kashmiri Muslims? This is a "holy war", says a jihadist video: what "holy" war kills innocents in the name of Allah the merciful, I ask? 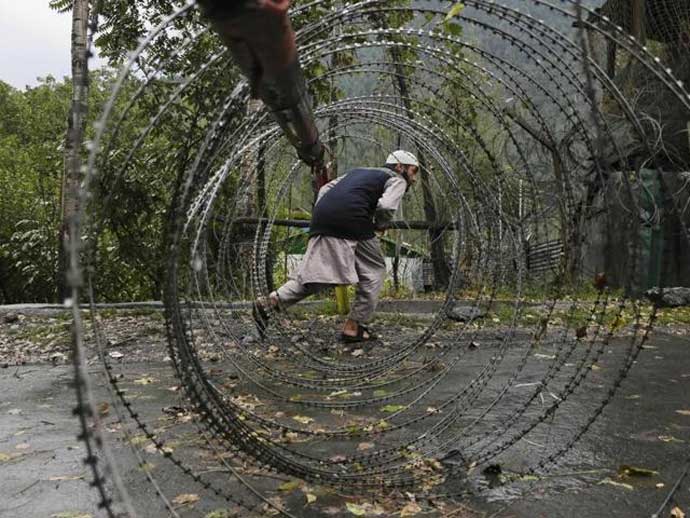 A Kashmiri man ducks to cross an iron barricade with coils of razor wire near a military base in Kashmir.

There are probably no answers to many of the above questions. Maybe we don't want to seek answers any longer for fear that it will expose our individual and collective hypocrisies. Maybe we want to take polarised positions because we find comfort in black-and-white portraits rather than shades of grey, in being caricatured as liberals and nationalists rather than as truth seekers? Besides, in this age of noise and studio warriors, who wants a dialogue when a harangue gets TRPs and Twitter trends?

So, a video on Army jawans being targeted by civilians leads to a chorus of voices standing by our brave Army men. Hardly any of them will criticise the army for tieing up a Kashmiri to a jeep and parading him around like a human shield. Remember those old Hindi films where the villain would drag villagers with a rope? Then, we would wince. Now, we will cheer: hey, it's the Indian Army after all out there, and we can't question the men in khaki. And will we also have high-decibel discussions when a Kashmiri provides water to a jawan or helps them during an accident, or when jawans rescue Kashmiris stuck in floods?

The state versus citizen narrative is so dominating that all else is pushed to the margins. Liberal voices plead for justice through the prism of Kashmiri "victimhood", the "nationalists" call for a "cleansing" in the name of India First. Both seem to be unwilling to find any space for a meaningful conversation that goes beyond frozen positions, forget a long-term resolution. 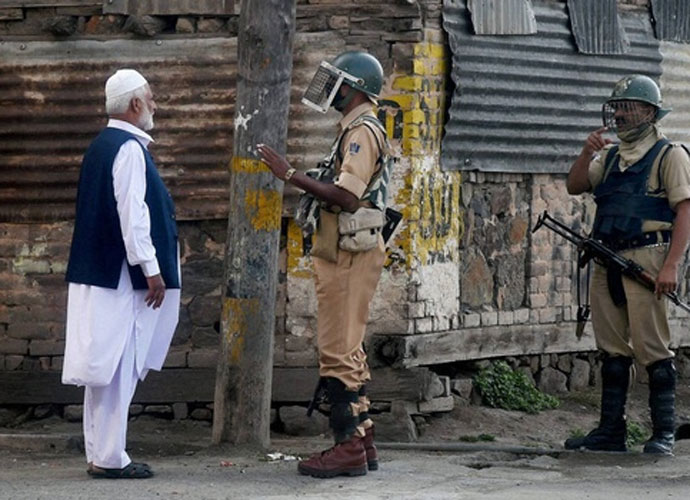 The armed forces see the locals as "subjects" not citizens.

Not just a piece of land

Yes, I also believe in India First. But my concept of India First doesn't involve treating a nation as a piece of land defined by geographical boundaries alone, or by looking at every problem as a law and order issue. My India First involves putting Indians first, be it Kashmiris or jawans, or any law-abiding citizen.

The gun cannot resolve a vexed political conflict or deliver some romanticised notion of "azaadi". A solution is achieved when you win the hearts and minds of people, "insaniyat" as former prime minister Vajpayee put it, must be the touchstone for any future resolution. But "insaniyat' involves taking risks, like Vajpayee did with his Lahore bus yatra, or Manmohan Singh did with the Srinagar-Muzaffarbad bus service.

Prime Minister Modi also took a risk when he tied up with the PDP but since then has pulled back. Why doesn't the prime minister withdraw, for example, AFSPA from parts of the Valley, as his ally is suggesting, as a major confidence-building measure and then build on his promise of good governance? You can't win hearts and minds with military force, just as Pakistan can't use cross-border terror to seize Kashmir.

Last night, when I poured my angst on Kashmir on TV and then social media, I was hounded by the pseudo-nationalist armies in cyberspace. For a moment, I almost felt like an "anti national" speaking for Jewish rights in Hitler's Germany. Kashmiris are Indians, not insects to be crushed or driven out. Jawans and citizens both have their rights which must be protected but we can't do so without reducing the trust deficit first.

We must fight terror and its symptoms, we cannot fight fellow Indians. A pellet gun for a stone will breed a cycle of hate and violence that will strip us of all humanity. Mahatma Gandhi would have stood between the stone pelter and the pellet gun: do we have anyone with similar moral courage?

Post-script: Depressed on a Friday night by the war over viral videos, I turned to a video of my own. A YouTube video of the film Kashmir Ki Kali and one of my all-time favourite numbers: Deewana Hua Badal. Watching Shammi Kapoor woo Sharmila Tagore was soothing: will Kashmir ever again hum to a similar tune?

(This article first appeared on the writer's blog.)

Also read: How Kashmiris are using phone cameras to tell the world of atrocities by security forces

#Kashmir crisis, #Indian Army, #Kashmir
The views and opinions expressed in this article are those of the authors and do not necessarily reflect the official policy or position of DailyO.in or the India Today Group. The writers are solely responsible for any claims arising out of the contents of this article.