I'm a Kashmiri Pandit, this is how I escaped being killed by security forces

Before the BSF man counted five, I had taken the longest leaps of my life and scaled the wall of home.

In Kashmir, it was almost customary to start tuitions from reputed professors, well ahead in December although schools and colleges would open in April. Buying reams of A4 paper sheets, carbon papers, Chinese fountain pens, guides written by various authors was commonplace. This was also a time for bonding with friends, treading long distances on atlas and hero cycles, celebrating teenage and new found "azadi".

December, 1989 was one such Decembers. I appeared for my class 11th examination and the Physics B paper got cancelled three times and ultimately had to be undertaken in Regional Engineering College (the so-called NIT of today) premises near Kashmir University.

The azadi had undertaken a new meaning by then. Local newspapers used to carry news of grenade attacks, crossfire, targeted killings, and we could hear shouts and slogans from mosques and on roads, and there were threat letters and gun-wielding youngsters.

My mother who was transferred to the government hospital in Hazratbal from the Lal Ded Hospital accompanied me on my way to REC, Srinagar for the Physics B paper. We walked to Lal Chowk, where we boarded a very unstable Tata mini-bus, which was a recent addition to the fleet of stable matadors in Srinagar city. These buses also used to play catchy Hasan Jehangir numbers. 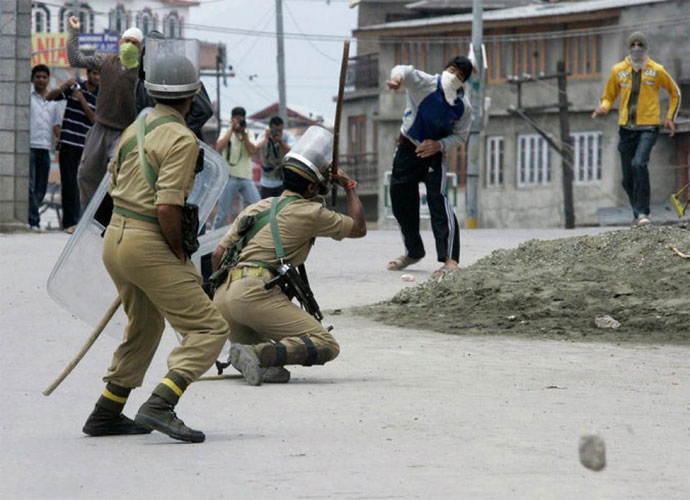 Protesters clash with the security forcers in Kashmir.

The moment we boarded the Tata mini-bus with no music, all we could hear was azadi, Pakistan, mujahideen, middle-aged men patting youngsters and congratulating them on the struggle they had started and stories of how they had crossed the border for arms-training. It looked like a movie scene from a remote village of Afghanistan with tribals only talking of war, destruction, revenge and religious supremacy of Islam.

Also read: Government is mistaken to think Kashmir conflict will simply die down

My mother removed the bindi from her forehead and covered her head with her dupata, which was wise looking at the conversations that were going around. This was my first encounter with the real world and the sad state of affairs that had gripped the Valley. Somehow, we reached the exam centre, and after the exams were over we got caged back in our home.

Kashmir Pandit parents, no matter the state of peril, are hell-bent on making their children study hard, and my parents were no exception. I was asked to start the Chemistry tuition for Class 12 from Prof Bansi Lal in an adjacent lane to our house. Stuffed with A4 sheets, carbon paper, I used to leave early morning at 6am in freezing cold to professor's house.

It must have been the first week of January, 1990. I got up and started heading towards my professor's home.

I saw the main gate leading to the lawn latched from inside and all windows closed. I started knocking at the door, my teacher with a half-opened window from his second floor started waving his hand in a funny way without speaking a word. I tried hard to understand what he was up to. However, I couldn't decipher anything.

Losing my patience, I left.

I had barely walked 500m, when I saw four BSF men positioned with their guns on the Doodh Ganga banks (the Doodh Ganga stream separates localities of Chanpora and Rawalpora). The moment they saw me, one of them shouted to freeze and raise my arms. Living in a conflict zone, I wasn't scared as this was commonplace. I stood where I was with my hands raised.

One of the BSF personnel walked with his gun aimed at me very slowly, while three of his colleagues provided him the cover, standing on the Doodh Ganga bank.

The first question after pointing the gun straight at my face was "Sala goli chala ke aa gaya bazaar mein?" I was unmoved and clueless as to what had happened, since the BSF headquarters where next to my house and everyone around was friendly.

Then he started frisking me, most probably looking for a pistol or a gun. His hand reached the pocket of my pheran and he stopped and patted the area so hard that I thought I had fractured my pelvic girdle. He found the A4 paper sheets rolled using the pen as cliff.

I don't know what struck him, although I could see anger and vengeance in his eyes. He asked me my name and whether I was a student. I replied Arvind to the first question and "yes" to the second.

Then he said, "I would count till ten, if you reach your home by then, I won't shoot." Now, before he reached the count of five, I had taken the longest leaps of my life and scaled the wall of home.

My parents seeing me sweating in cold could sense that something was grossly wrong. I narrated the ordeal and how I had survived.

Later, during the day we realised that some militants had killed unarmed BSF personnel while they were buying milk from the nearby market and the whole area had been cordoned off in the early morning, the time I left for my tuitions.

#Kashmiri Pandits, #Terrorism, #Kashmir
The views and opinions expressed in this article are those of the authors and do not necessarily reflect the official policy or position of DailyO.in or the India Today Group. The writers are solely responsible for any claims arising out of the contents of this article.