DSP Ayub Pandith was beaten to death by a crowd near Srinagar's Jamia mosque.

Let me be blunt. The situation in Kashmir is desperate. As many as 16 personnel of the Jammu and Kashmir police have lost their lives in the state in this year alone.

Last night, on June 22, beaten to death by a mob was the deputy superintendent of police, Mohammed Ayub Pandith, who was lynched in Nowhatta. His body was dragged for 300 metres. Ironically, he was guarding the separatist leader Mirwaiz Umar Farooq, and was on the latter’s security duty.

With 16 deaths reported in the first six months, the highest number of casualties in the past two decades, 2017 has turned into the bloodiest year for the unsung J&K police.

Six policemen were killed in south Kashmir's Achabal on June 16. South Kashmir is a stronghold of the ruling Peoples Democratic Party (PDP). Mehbooba Mufti, the chief minister who is clinging on to power though her legitimacy is all but gone, has not attended a single martyred policeman's funeral, though there are reports that she might attend Pandith's last rites.

Yes, this is what it has come to in Kashmir as the BJP and PDP play their respective power games. Who will be held accountable for making the situation worse than the heydays of militancy in the early 90s?

Would it be Mehbooba Mufti, encouraging a smoke and mirrors situation holed up in the CM's residence, virtually a puppet of Ram Madhav, the powerful BJP general secretary who fathered the BJP-PDP alliance? Or, would it be Ajit Doval, the other proponent of the "iron-fist" theory? 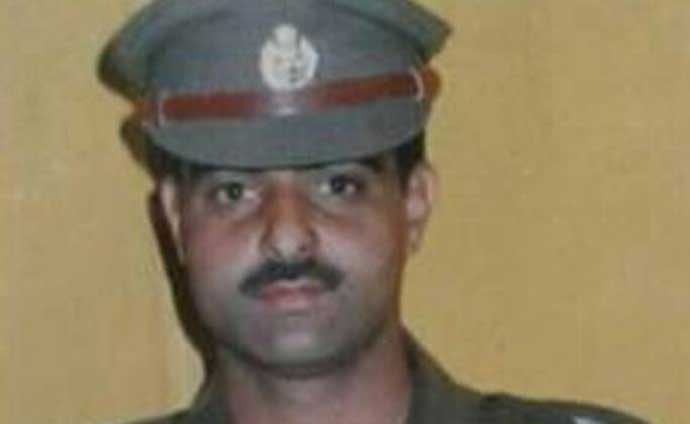 The legitimacy of CM Mufti and India itself has eroded with just seven per cent voting percentage in the Anantnag poll and the subsequent parading of the "human shield" by the Army. By not attending a single policeman's funeral, Mufti is trying to send signals to her core constituency while still enjoying the office that’s bestowed on her by the BJP.

There is an increasing divide among the Jammu and Kashmir police, which mirrors the division in the Valley, as to what sort of role they should play given their local roots. In the 1990s, when political activists were being killed, the policemen were not targeted. This is the first time in the long and tortured history of violence in the state that policemen’s homes are also being attacked, said a senior official of the force.

The escalation in attacks against the policemen even has militants barging into their homes. In March this year, armed men entered the home of Abdul Samad, Baramulla jail superintendent in Hafru in central Kashmir, and took his son Ashiq and relative Bilal hostage. The official was not home, but they told his family that they had come to kill him. The hostages were later set free.

The J&K police plays a vital role in anti-terror operations, setting up a second cordon ring when the Army conducts counter-insurgency ops, and plays the role of the local scouts. During the worst years of the militancy, they provided vital intelligence, given their local contacts, and enabled the slow return of normalcy.

Now, they are caught in a cleft stick: shunned as a pariah by the locals, and not even given any support by the Mehbooba Mufti-led government.

Why Mufti and the BJP continue to cling to office in the most unnatural alliance is a mystery. While BJP claims it is practising "muscular nationalism" and restoring normalcy in the Valley via "surgical strike" against Pakistan, the claim is hollow.

Even Prime Minister Narendra Modi's claim that demonetisation "had broken the back of terror funding" appears to be a joke, as terror incidents, which now include lynching of policemen and Army personnel, have been aplenty. Militants in May abducted and killed a young Army official, 23-year-old lieutenant Ummer Fayaz, who was visiting his home in south Kashmir for a family wedding.

Since the 1990s, there has been a social compact within the Kashmiri populace where many local people worked for the government, while many supported or were active in the militancy. This has now completely frayed. An angry senior J&K official says, "Why do you expect the militants to play by the rules when Ram Madhav makes a public statement that all is fair in love and war."

The PDP has its base in the militant stronghold of south Kashmir, which is seeing the maximum action, with insurgents doing their best to dominate the region. So far, it has led to intimidation and violence directed against J&K police personnel, who have been instrumental in controlling militancy over the years.

Now, in the new era of stone-pelters, which include young schoolgirls and the armed militants coming together, the J&K police face an impossible situation.

Interestingly, despite an elected government being in office, the only authority speaking on the situation in Kashmir is the Army chief Bipin Rawat, with his bellicose statements including this one: "I wish the stone-pelters fired at us. I just cannot tell my troops to wait and die as they are fighting a dirty war in Kashmir."

While COAS Rawat was venting justified frustration, it's eerie to see in a democracy only the Army chief speaking on Kashmir, which at its heart is a political problem. This is not lost on an eagerly watching world. Rawat's controversial commendation of Major Leetul Gogoi, who sparked off a nationwide controversy when he tied Farooq Ahmad Dar to his jeep as a human shield, has had severe repercussions in Kashmir.

Everyday, the body count goes up, but nobody in authority cares. Senior National Conference leader Farooq Abdullah had said that the only way to restore some semblance of normalcy in J&K was to impose the President's rule.

Unfortunately, the governor of J&K, NN Vohra, is busy with the politics of the India International Centre in Delhi. Pretty much sums up how Delhi and the central government deal with the sinking Valley.

Also read: What 'innovations' does Army Chief Bipin Rawat have in mind for Kashmir?

Post your comment
#Jammu and Kashmir, #Kashmir crisis
The views and opinions expressed in this article are those of the authors and do not necessarily reflect the official policy or position of DailyO.in or the India Today Group. The writers are solely responsible for any claims arising out of the contents of this article.