Teaching Indian 'nationalists' a thing or two about Kashmir conundrum

A military solution to give effect to the Parliament resolution of February 1994 is not possible.

Shahid Afridi, the flamboyant Pakistani cricketer, was in news recently for reasons not quite related to cricketing. He had the temerity to openly refer to the portion of Kashmir - which is with India - as Indian-occupied Kashmir.

A large section of media in India was soon up in arms condemning him for the statement. Indian cricketers, both past and present were roped in to condemn Afridi. Some “nationalist” channels called guests for full-fledged discussions on the matter. The Pakistani representatives were given thorough tongue-lashing and reminded in no uncertain terms that entire Kashmir was integral part of India and Pakistanis better come to their senses and relinquish occupation of Pakistan-occupied Kashmir(POK).

Appalling and worrisome situation ongoing in the Indian Occupied Kashmir.Innocents being shot down by oppressive regime to clamp voice of self determination & independence. Wonder where is the @UN & other int bodies & why aren't they making efforts to stop this bloodshed?

Media called me for reaction on @SAfridiOfficial tweet on OUR Kashmir & @UN. What’s there to say? Afridi is only looking for @UN which in his retarded dictionary means “UNDER NINTEEN” his age bracket. Media can relax, @SAfridiOfficial is celebrating a dismissal off a no- ball!!!

The above episode took me down the memory lane when we faced a similar situation while commanding my unit in the sensitive Samba sector. Our sector commander at Jammu, DIG KS Vohra, handled the situation extremely intelligently and the Pakistani rangers were left smarting. The Pakistan Rangers had sent a communication (formally referred to as "protest note" in technical language) addressed to “DIG BSF Jammu, India-held Kashmir”. The communication was promptly returned as “address untraced”. The Pakistanis were left with no alternative, but to resend the communication by writing the correct address. 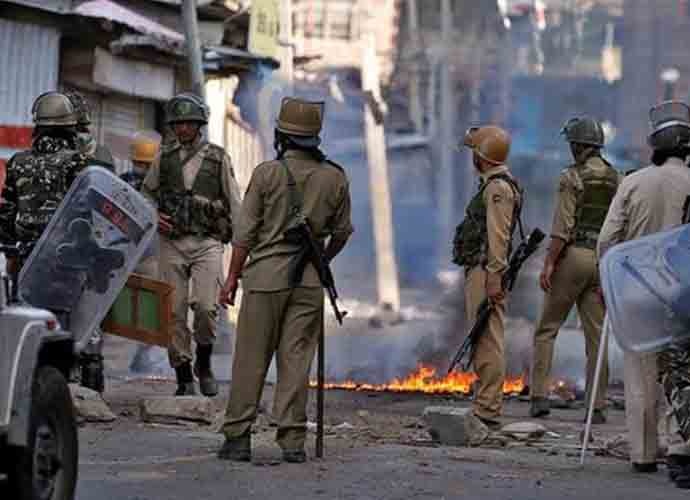 In a recent interaction with Farooq Abdullah at a conclave, the anchor, well aware of the views of the former chief minister of J&K was trying for a “breaking news”. Abdullah replying to her question about Kashmir said that it must be resolved by dialogue. He further stated that the fact that a large part of Kashmir is under occupation of Pakistan cannot be wished away. The anchor’s response that “woh unke baap ka to nahi hain” invited loud cheering from spectators.

Abdullah categorically stated that it was neither possible for Pakistan to physically capture the part of Kashmir with India nor was it possible for India to capture PoK. Abdullah suggested that the Line of Control should be converted into a soft border to resolve the vexed issue, a solution which he has been advocating for long.

The anchor’s rhetoric response was that we should stop talking and “sabak sikhayen”, “jitney aayen utne maarege” and “agar unko dosti ki bhasha nahi samajh aati to hum batayenge dushmani kya hoti hain”. As is the wont, the spectators were ecstatic and cheered the anchor.

Even at the cost of inviting the ire of a large number of so-called nationalists, I must state that what Abdullah says needs serious consideration.

Notwithstanding any Parliament resolution, it is absolutely impossible to alter the status quo on ground. Both forces have strong defences on LoC. There would hardly be any troops available for carrying out offensive action to neutralise the Pakistani defences right along the LoC and then move into the depth area to capture entire PoK because when we move inside, we will have to factor in the response of the local population which may or may not be in our support.The already-stretched resources are more likely than ever to get embroiled in another insurgency.

The so-called conventional superiority of the Indian Army over Pakistan gets neutralised by the fact that India cannot afford to denude northern borders with the dragon ever threatening. The lessons from Kargil must not be lost sight of. It took a sustained campaign over several weeks to recapture the areas lost to Pakistan due to our own mistakes.

Fact that the Kargil conflict was fought in an environment free from interference of Pakistani Air force and Indian Air Force could afford to freely carry out bombing and close support to own forces in our own area without interdiction. This luxury will not be available in any future war with Pakistan.

Further, unlike Kargil episode, it cannot be guaranteed that any future war effort to capture PoK will remain confined to J&K. In a desperate situation, Pakistan may extend the zone of conflict putting a great strain on our military resources. Almost 20 years after Kargil, both Pakistan and India are much stronger militarily. The nuclear stockpile of both countries too has expanded manifold.

Suffice to say that a military solution to give effect to the Parliament resolution of February 1994 is not possible. Also, it will increasingly become further difficult to achieve the desired aim in future.

Therefore, giving serious thought to what Abdullah says is important. If nothing, it will deprive Pakistan of its raison d'etre to keep fomenting trouble In Kashmir. It will help both countries redeploy their armed forces to control situations at other trouble spots in their respective countries.

This will also help us both focus our meagre resources on development and uplift of poor masses in both countries.

It is not that what Abdullah says is new. This has been mooted from time to time. From Shimla Accord to the Lahore bus yatra in 1999 to Vajpayee-Musharraf dialogues in early 2000, all were aimed at softening the barriers along the LoC and finally give it the status of international border with special provisions for residents of both parts of Kashmir.

It has been thinking in strategic circles that the civilian government in Pakistan doesn’t control its Kashmir policy. It is the military establishment that holds the reins in so far as Kashmir is concerned. That hurdle also seems to have been removed with the Pakistan Army chief recently stating unambiguously that solution to Kashmir imbroglio should be found through dialogue.

It will need a pragmatic leadership in both countries to convince masses about the futility of continued conflict in Kashmir and accept the ground realities by shunning rhetoric.

And as far as the February 1994 resolution of Parliament is concerned, have we also not signed the “Land Boundary Agreement” with Bangladesh recently?

#Farooq Abdullah, #India-Pakistan, #Shahid Afridi, #Kashmir
The views and opinions expressed in this article are those of the authors and do not necessarily reflect the official policy or position of DailyO.in or the India Today Group. The writers are solely responsible for any claims arising out of the contents of this article.