Kashmiri Muslims are caught between power elites and a heartless state

Separatists like Mirwaiz Umar Farooq have ensured their own families don't get affected.

On July 10, the Jammu and Kashmir government had appealed to separatist Hurriyat Conference, besides mainstream parties, to assist in its efforts to restore normalcy in the state.

Hurriyat's Mirwaiz Umar Farooq responded by wondering that how could the separatists be of help to the government in this tumultuous situation, when they were mistrusted, and labeled as a "threat to peace".

Evidently, Mirwaiz, who has been a pacifist in his approach to resolution of the Kashmir issue for over two decades, did not see himself as a threat to peace.

Now, there is a strange, mystifying change in his tone.

Also read - The grand delusion that is Kashmir

On July 13, The Indian Express carried an article written by the Mirwaiz. In it, he is suddenly strident and combative.

What led to this shrill, startling change in the Mirwaiz within a span of three days, given that there is a stark departure from the earlier Mirwaiz? 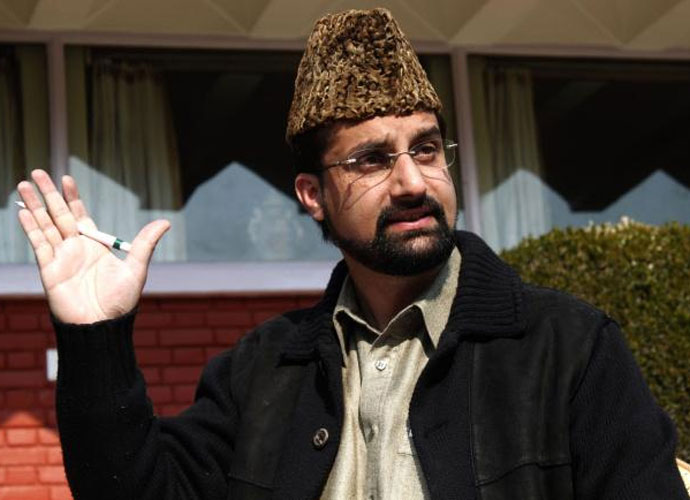 Note the words of the Mirwaiz in The Indian Express: "The baton of freedom has been passed on to the fifth generation. For us, it is a matter of great pride and great pain as we witness our next generation joining the journey of freedom and sacrificing their lives. Which nation wouldn’t feel that way?"

It is being bitterly noted among many quarters that the boys pelting stones at the Army and the police, and getting grievously injured in retaliatory action, are not sons or relatives of separatists.

Their children, along with the families, are in peaceful areas of mainland India or abroad. The protests that kill and maim aren't apparently meant for them.

Her biological son is comfortably living overseas as are children of most separatists. 'sons' here are canon fodder https://t.co/j5rjwRSK9a

The Mirwaiz further proclaims in his article: "Men, women and children have been beaten up mercilessly on the streets and in their homes across Kashmir. All this has been done to 'contain' the angry population of the Valley, mourning and enraged at the killing of Burhan…"

But a sizeable section of the Valley which wants peace to prevail in Kashmir has been left out.

After Burhan was killed, men in towns and villages across the Valley directed their families that no one would sit with a long, sad face, or exhibit any mourning.

"Bachhon pe bura asar nahin hona chahiye (There should be no negative effect on the children)," they ordered.

The last 15 years have seen an exponential increase in the number of Kashmiri Muslims having dual residences. Elite, prosperous Kashmiris who can afford multiple houses have set up plush houses in Jammu, Delhi and other Indian cities.

Other Kashmiris have also taken up or constructed houses in Jammu or Delhi, while they retain ties to homeland Kashmir. It is wrong to assume that Kashmiris move to Jammu only for succour from the severe winter in the Valley, or because the government moves there for the winter months.

In private conversations, Kashmiris admit that they appreciate the rich, plural life of mainland India with diverse opportunities for education, healthcare and entertainment.

Post Burhan violence, an even larger number of Kashmiri Muslims want to have a dual residence. They are scared of the situation in Kashmir deteriorating frighteningly.

Their desire to find a safer abode is completely natural. A man is driven by survival instinct. He wants a safe, peaceful life for his family, where his children will not be radicalised by political discourse over the burdens of the past.

Kashmiri separatists claim that the Indian government "is constantly propagating through print and electronic media that Jammu and Kashmir is an integral part of India".

Gone are the times when Kashmiris could allege that elections to the local government are not free and fair.

A section of Kashmiri Muslims often claim injustice by the Indian State over denial of the plebiscite promised by Jawaharlal Nehru, and their right to political self-determination.

Pandit Nehru made sterling contributions to the building of a new nation. But his ambivalence on Kashmir is costing the country in blood – both in the Valley and in mainland India.

Having a plebiscite in Kashmir is unthinkable. The Brexit experience, even though a referendum, has shown that momentous political policies that govern the future of a nation cannot be left to the people to decide by a simple majority vote.

Consider for a moment the possibility of a plebiscite in Kashmir.

If India wins the plebiscite, a vociferous and dominant section of Kashmiris will reject it as the great Indian deception in the Valley.

They will demand another plebiscite. Pakistan will jump into the fray with its usual accusations against India. It will open a new chapter in India’s difficulties in Kashmir. Even as I state these political truths,  which will be contested by many Kashmiris, I am deeply pained by the totally misguided vilification of the Kashmiri Muslim in mainland India.

On July 11, noted journalist Rana Ayyub tweeted, "Thousands of twitter handles abusing Kashmiris and asking for them to be wiped off. Why is the clamp on hate speech so brazenly selective?"

Lakhs of Kashmiri Muslims are actually victims of the fire that is raging in the Valley today.

Those living in mainland India may assume that Kashmiri Muslims are spiteful towards Indians. This belief is highly delusional and mistaken. I say this as a proud Indian who has closely interacted with Kashmiris for the last few years.

Kashmiris are a highly warm, loving and gracious people.

Kashmiri Muslims are happy to interact with Indians from all states. It is completely wrong to assume that Kashmiri Muslims are a violent tribe. At the time of Partition, Muslims were massacred on the Indian side, and Hindus on the Pakistan side in Jammu and Punjab provinces.

In Muslim-majority Kashmir, no Hindu was harmed. Mahatma Gandhi hailed it as an "oasis of peace" during vicious bloodshed.

Mainland Indians are greatly pained by the exodus of Kashmiri Pandits from their homeland, and hold the Muslims responsible for it.

But ordinary Kashmiri Muslims were powerless against this exodus. They were left aghast and shocked at the violence that rocked Kashmir with the onset of militancy.

Some rogues among Kashmiri Muslims joined the flocks terrorising the Pandits. The rest watched helplessly, unable to control the madness that engulfed their land. They cowered in this unprecedented wave of terrorism that swamped Kashmir.

Eminent historian Ramchandra Guha noted in his seminal work, India After Gandhi, that the popular revolt that broke out in Kashmir in 1989 was at first led by the Jammu and Kashmir Liberation Front, shouting for azadi.

Within a year, the cry of azadi was replaced by the call of jihad (holy war).

As a popular slogan of the Hizbul cadres went: "Na guerrilla jang, na qaumi jang: al jihad, al jihad". (This is neither a guerrilla war nor a national liberation struggle; this is jihad, jihad.)

Caught between the militants and the Army, the Kashmiri Muslim has been the worst sufferer of the insurgency that singed his land. Even now, a large percentage of Kashmiri Muslims form the silent majority who want the fight with India to end.

Their voices and their aspirations are invalidated by the small, vicious minority that has poisoned successive generations.

After the Pandit exodus, Kashmiri Muslims have been known to lovingly care for Hindu temples. Amitabh Mattoo, one of India's leading thinkers and writers on international relations, and among the most eminent Kashmiri Pandits, posted a photograph on Facebook in 2015. The photograph was of the temple of Roop Bhawani, a Devi avatar, in Ganderbal.

His post said that the temple was "looked after, with great care, by Ghulam Mohammed Teli. Kashmiri Muslim residents nearby never enter the temple compound after eating non-vegetarian food. Why do always forget that inspite of the conflict and turmoil there are still living examples of our syncretic culture?"

Even now, defying curfew restrictions, local Kashmiri Muslims risked their lives to rescue Amarnath Yatra pilgrims injured in a road accident on Jammu-Srinagar National Highway and carried them to hospitals.

We cannot claim that Kashmir is an "atoot ang" of India and hate the Kashmiris.

Ordinary Kashmiri Muslims truly welcome the return of the Pandits.

However, Kashmiris are saddened by their vilification in mainland India.

Slowly, with sustained bashing by the nationalistic media and the abuses poured on social media, this sadness turns into anger.

There is no denying that Islamic fundamentalism has been on the rise in Kashmir in the last few years.

Jammu has witnessed a muscular display of Hindu majoritarianism, which has come as a quick backlash to the Islamic fundamentalism of Kashmir.

The mainland Indians cannot comprehend the Kashmiri Muslim. This lack of understanding has now turned into deep mistrust.

The enforcement of the Armed Forces Special Powers Act (AFSPA) should have been gradually reduced in Kashmir after violence and militancy receded about a decade ago. This was not done. The Kashmiri sees the heavy presence of the Army on his land as a loss of dignity.

Now, with a fresh cycle of violence rocking Kashmir, the thinning of Army presence seems more unlikely than ever.

#Kashmiri Pandits, #Burhan Wani, #Kashmir
The views and opinions expressed in this article are those of the authors and do not necessarily reflect the official policy or position of DailyO.in or the India Today Group. The writers are solely responsible for any claims arising out of the contents of this article.