If Modi sarkar could have fruitful talks over the Naga Accord despite the armed struggle, why not with Kashmiris?

Prime Minister Narendra Modi's gambit of widening the attack on Pakistan by raising the resistance in Balochistan, Baltistan-Gilgit and PoK as proof of Pakistan's widespread violation of human rights, was a non-starter despite some support from sections of the supine Indian press.

Clear proof of this is the resounding silence of the United States including that of President Obama. 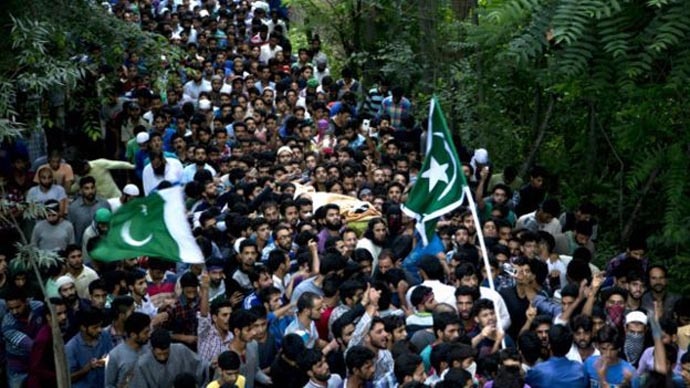 As the great power of silence has shown, no one wants to get into this squabble.

No other great power supported the PM's gambit. Nor did this purported increase in Indian pressure deter Pakistan in any way. The attempt to deflect attention from Kashmir and the anger and turmoil there did not work. Instead, the chairperson of the UN Human Rights Council sought Indian government's permission to examine the Kashmir human rights situation.

This was promptly and politely denied. But this act will be reported back to the UNHRC at its next meeting. That will embarrass India more than Pakistan, though the latter's human rights record is very poor, but it is protected by its alliances with the USA and China, not to speak of Saudi Arabia.

The way to reduce the pressure on India's Kashmir problem is through internal mechanisms like a more caring and consistent attitude towards its own people by the Kashmir government in the first instance, and successively the Union government.

Mehbooba Mufti's volte face on Burhan Wani's killing, where the PDP itself, according to Kashmiri journalists, wanted the Hizbul Mujahuddin commander "taken out" as he was damaging the party's South Kashmir base, was then claimed by the CM to be outside her knowledge. She said she would have liked to give Wani a "second chance".

Further, despite the promise made by then PM Manmohan Singh at the DGP's conference in 2011, just after the 2010 Kashmir unrest in which some 120 people died, that his government would procure non-lethal means for crowd control as well as protective armour for the security forces, the ruling dispensation did not deliver. Now the CRPF is insisting on its continued use of pellet guns though its own DG has admitted that pellet guns are lethal though "least lethal."

Since 2011 there has been no considerable purchase of non-lethal crowd control measures. Pellet guns were used extensively in 2010 and continue to be used. But many Indian politicians and the bulk of the Indian people want an equitable and honourable solution to this problem, a "dispute" according to a very substantial number of Kashmiris.

But instead of playing shuttlecock with one mainstream Kashmir party or the other, with the BJP thrown in, is there really an alternative to the Hurriyat? Is that an anathema? But the same Modi government had fruitful talks with the NSCN(IM) over the Naga Accord even though the armed struggle and hostilities persisted for decades.

Though some important decisions have yet to be made public, the NSCN seems to be satisfied. This happened because of the PM's out-of-the-box thinking to form viable solutions. Why not apply the same principles and flexibility to Kashmir?

Of course, Hamid Karzai, former Afghanistan president has welcomed the PM's statement. Because of the pressure mounted by Pakistan and the Taliban on him and their continued intervention in Afghanistan, he would approve. So would the exiled Balochistan leaders. In that particular struggle, Pakistan has lost 3,300 troops with the Baloch having lost much more.

But as the great power of silence has shown, no one wants to get into this squabble, as no accord like the Shimla Agreement is adhered to.

The only viable alternative then remains, as stated earlier, wide ranging talks with the major actors in Kashmir. A ceasefire is the need of the hour.

Curfews have to be sharply reduced so that Kashmiris can get essential supplies and medical aid.

After all, these are our people, even though 14-year-old stone pelters question that. It is an uphill task, but the PM and his team must buckle down and have frank talks through interlocutors, in the initial stages.

There is no other way, no other government or no other external force that can do this.

Yes, a combination of forces will help, but the major force must be the Union government.

#Gilgit-Baltistan, #Balochistan, #Jammu and Kashmir, #Kashmir Unrest
The views and opinions expressed in this article are those of the authors and do not necessarily reflect the official policy or position of DailyO.in or the India Today Group. The writers are solely responsible for any claims arising out of the contents of this article.