At a time when New Delhi has toughened its stand against separatists and militants alike, J&K governor NN Vohra seems to be holding a different opinion, at least with regard to Hurriyat-G chairman and pro-Pakistan hawk Syed Ali Shah Geelani by “counting on him” to restore normalcy in the restive region.

Veteran Congress leader and former Union minister Mani Shankar Aiyar has dropped a bombshell, saying Vohra has appealed to Geelani to make the Valley's youth shun protests, even as the aged leader had “helped last year to calm things down”.

In a write up "The Danger Of Becoming Jammu vs Kashmir” for NDTV, published on May 30, Aiyar has thrown light on his recent visit to Kashmir.

“I spent most of last week in Kashmir with a team from the Kolkata-based Centre for Peace and Progress led by its chairman OP Shah, meeting everyone we could. That, of course, included four Hurriyat leaders - Mirwaiz Omar Farooq; Shabbir Ahmed Shah; AM Bandey - and the one who's got everyone's goat: Syed Ali Shah Geelani,” Aiyar says in the introductory paragraph.

But the next paragraph makes a startling revelation about Vohra having made a ferment appeal to Geelani. “But we also met Governor NN Vohra, who not only spent 90 minutes briefing us in detail, but also thanked us most generously for making the visit, underlining the need to reach out to all sections of Kashmiri opinion. Indeed, he even asked us to convey to Geelani his request that Geelani appeal to the youth to not jeopardise their own education and their future employment prospects by taking to the streets, even as Geelani had helped last year to calm things down.”

On May 25, an official handout from the information department confirmed the meeting between the governor and the visiting delegates led by Aiyar. But there was no mention of the governor having appealed to Geelani. 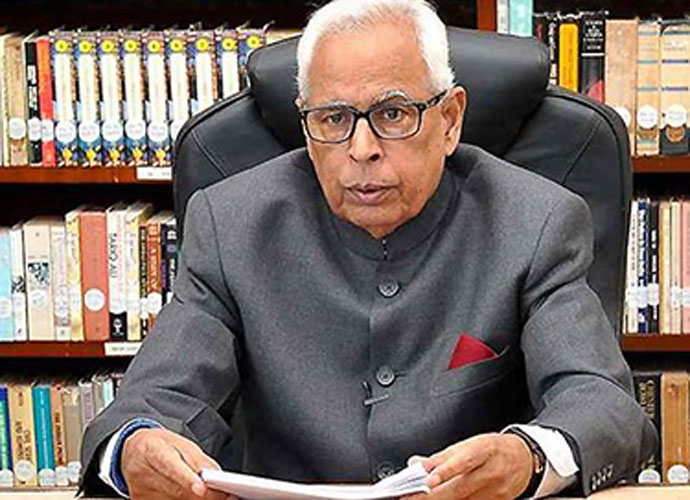 “The governor appreciated the initiatives of the Centre for Peace and Progress and thanked the delegation for their valuable contribution towards the restoration of normalcy in the state,” the official handout said.

Call it fate or coincidence, on the day the governor supposedly sought Geelani’s help, defence minister Arun Jaitley ruled out any talks with the separatists. “In this current atmosphere of violence, we will not hold talks with separatists who are instigating violence. Not for now,” he told a news channel. Jaitley also said the NDA government would neither compromise with separatists nor with terrorists.

On May 28, home minister Rajnath Singh asserted that the BJP-led NDA government has found a "permanent solution" to the vexed Kashmir issue but ruled out inviting separatist groups for talks on the matter.

But if Aiyar is to be believed, Vohra made his appeal to Geelani, within a month of having met Prime Minister Narendra Modi in the national capital. The governor seems almost dependent on Geelani with regard to the Kashmir unrest. Photo: Reuters

On May 5, Vohra had called on Modi and discussed with him the security situation and continued unrest in the Valley at the meeting that lasted about 45 minutes.

While many look at Aiyar’s visit as part of some Track-II diplomacy aimed at resuming dialogue with separatists, the visiting delegate hasn’t ruled out such assumptions. “Our principal objective was to demonstrate to the governments at the Centre and the state, and skeptics and hardliners around the country, that every shade of political opinion and every section of society could be brought together around a table. We succeeded,” Mani says in his write-up.

While talking to mediapersons in Kashmir, Aiyar had said that on return to New Delhi he would use the “power of his pen” to carry forward his agenda. But his first write-up shows the governor almost-dependent on Geelani with regard to the Kashmir unrest.

Interestingly, opposition National Conference has been repeatedly demanding imposition of governor’s rule in the state, saying the Mehbooba Mufti-led state government has failed on every front. But Aiyar says the governor counts on Geelani.

Post your comment
#Kashmir crisis, #Mani Shankar Aiyar, #Syed Ali Shah Geelani, #NN Vohra
The views and opinions expressed in this article are those of the authors and do not necessarily reflect the official policy or position of DailyO.in or the India Today Group. The writers are solely responsible for any claims arising out of the contents of this article.