Avoiding another season of disasters in Kashmir

Yelling azadi is well and good, but what is this azadi, is it merely drawing a border on the map?

Winter is usually quiet in Kashmir. The durbar move means that all the politicians and bureaucrats have vanished to the warmer climes of Jammu, and since political violence is a performance art, with the main audience missing, fewer performances are to be had.

Of course there are some speeches happening in the local Assembly, but sadly few expect progress there. From as early as 1952, when Nehru imprisoned Sheikh Abdullah, on charges that were never proved, that were, in fact, devoid of any evidence that could be presented in a court of law, the politics of J&K have happened more out of the formal channels of democracy than within them.

As all of us saw this last year, the politics of 2016 were written in blood, violence and blindings, and they were a politics of failure. It would be wise to spend a few months figuring out the many things going wrong before the winter is gone, and the “performers” are available again.

There are many in Kashmir, as well as their sympathisers, who will resent labelling the season of violence just past as “failure”. I spent an afternoon arguing with a (foreign) friend sympathetic with Kashmir who insisted that resistance was not just the right, but also a duty for an oppressed population, otherwise how would they break out of oppression? The politics of 2016 were written in blood, violence and blindings, and they were a politics of failure.

Let me then start by acknowledging that when human rights are trampled over, when people are murdered without justice, or imprisoned without legal justification, then protests are necessary. Anybody with the slightest familiarity with Kashmir will know that tens of thousands have been murdered, many others have been displaced, an unknown number have been tortured, and even more have been wounded or maimed ­in the last two and a half decades.

This has affected people across communities, across religions, across the geography of the state. And yet, so many years after many traumatic events, whether it is the Gaw Kadal massacre, the Konan Poshpura mass rape case, or the terribly circumstance in which the majority of the Kashmiri Pandits were forced to abandon their homes in the Valley, there has been little sign, or even hope, of justice.

In fact so few are the visible signs of justice done that when five Army men were sentenced to life imprisonment for murdering three labourers and passing them off as militants in the fake Machil encounter case, Narendra Modi (who had no role in the decision, obviously, not just because the PM cannot interfere in a military court martial, but also because he was not even the PM during the time the court martial took place) tried to take credit for it. Declaring that the justice was a “kamaal-e-Modi, (a miracle of Modi)” when he made his speech at the Sher-e-Kashmir stadium on December 8 2014, and, as a number of news channels reported, that “It is proof of my intentions,” he declared. “I have come to give you justice.” 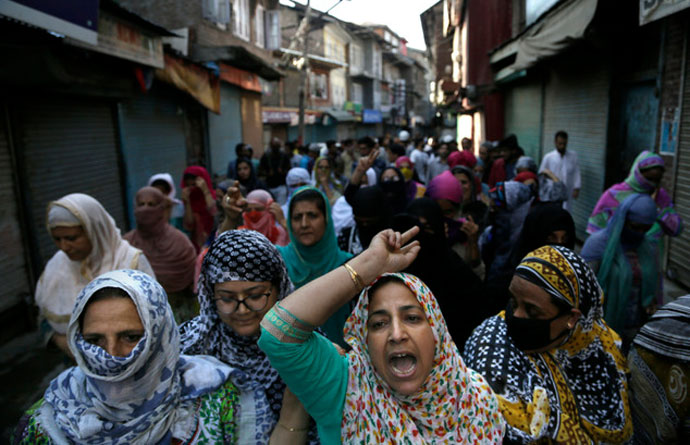 When human rights are trampled over, when people are murdered without justice, or imprisoned without legal justification, then protests are necessary.

In effect, even Modi accepted that justice had been denied, though over the summer of 2016 his government spent its time either murdering those protesting for justice, or trying to justify it.

That said, how much did the protests achieve in furthering this goal of getting justice? About a hundred people died, hundreds were blinded by shotgun pellets, the livelihood of thousands, maybe tens or even hundreds of thousands was destroyed over the summer. Anybody who took part in, or supported, this form of protest has to answer to his or her own people what they have achieved. Are the lives and blood of their own so cheap that Kashmiri leaders can spend it without being held accountable?

Of course the people who have suffered most in terms of reputation are the mainstream parties. The PDP had already decided on a collaborationist path beforehand. In the secret negotiations before the alliance was agreed upon, Haseeb Drabu, negotiating on behalf of the PDP, was referred to as “Sita” to the BJP’s “Ram” Madhav. Drabu and his ilk remain the silent, docile partners in the alliance as the BJP continues to violate each and every clause in the Agenda of Alliance.

It is shameful that Mehbooba Mufti ends up sounding more hardline than Rajnath Singh, but for those that  knew her from earlier would not be surprised. I met her on work in 2005. The peace process was at its height, and Mufti Mohammed Sayeed had used it to leverage a remarkable opening in the political possibilities. At the same time, though, we had a disturbing high number of people detained under J&K’s Public Safety Act (PSA). The PSA is a J&K state law, and allows imprisonment without evidence. It is – prima facie – violating of the Constitution, but has remained in use ever since it was introduced by Sheikh Abdullah, supposedly to muzzle pro-Pakistan dissent.

When my colleague and I asked Mehbooba about this, she explained that these people being arrested under the PSA were “overground workers”, who were hiding weapons and ammunition for militants. This is a straight out lie. The only times that the PSA is used is when there is no evidence. When there is evidence, a great many other laws are already in place to arrest people. Mehbooba’s mendacity has not lessened over time, but as chief minister, her dishonesty carries higher costs.

Of course the principal challenger to Mehbooba Mufti is Omar Abdullah, except everything that he can accuse Mehbooba of, he has already done. It was during his tenure as chief minister that the protests of 2008, 2009, and most damagingly, of 2010 (set off by the Machil fake encounter) took place. These protests helped radicalise the young men and boys that are either taking up weapons or attacking the security forces today. They saw friends and relatives violently beaten or killed, and they have little respect for the institutions of governance that are quick to attack, and are never held accountable for their violence.

Then, of course, there are the “separatists” – although God alone knows what they stand for nowadays. They have divided enough times that their main enemies seem each other, and their goals opaque. These men – and the vast majority of them are men except for that Batman-wannabe, Asiya Andrabi – have called for marches, for protests, for hartals and bandhs, and now months and months after all this has taken place the people of Kashmir are further away from any prospect of justice altogether. All that these people seem to offer is a path to suicide for young people immensely frustrated by the prison of their lives.

While death for a cause may sound intensely romantic and idealistic to young people, getting yourself killed, or wounded, is not a guarantee of change. If that is all it would have taken, then Syria would be a paradise by now with all of its dead and maimed. The only thing that brings about change is a clear plan for clear outcomes harnessing the powerful of a socially cohesive society. All of these aspects are missing currently in Kashmir.

People are afraid of sharing plans because they feel that they will be undermined. Given the number of spies, informers and mukhbir in Kashmir, though, any plan is immediately well known to all agencies – in India and Pakistan – almost as soon as it is formulated, so what is the point of hiding it?

More important are the shared goals. Yelling azadi is all well and good, but what is this azadi, is it merely drawing a border on the map, because if a country is dependent, a political border will give it little power. There are ways that communities can win far greater freedoms while not moving those lines, but whatever outcome is to be pursued, it cannot be pursued properly if you hide it.

Lastly, and most importantly, is social cohesion. Abraham Lincoln said, famously, “a house divided against itself cannot stand”. Kashmir is not just divided, it is drawn and quartered. Every actor that wishes to control Kashmir understands that the easiest way to do so is to keep the people divided – and it seems every Kashmiri leader wishes to help make this possible, assisted by a number of writers and commentators happy to call anybody a “traitor” if they do not do what the leader wants.

The problem with this utterly hopeless situation, where injustice is obviously present but hope for positive change is almost entirely missing, is that young people have only violent protests or supine obedience as an option. Neither is a good option, and while this situation continues, young people will continue to protest.

As an Indian I am sick to death of watching this play out for years, to no betterment of the condition of those that have already experienced grave injustice, but an outsider cannot build up Kashmiri society, or make plans, this is for Kashmiris themselves to do.

If they fail, the cost will be heavy, in the blood of more young people dead. Isn’t it time that we found another way?

Post your comment
#Azadi, #Kashmir
The views and opinions expressed in this article are those of the authors and do not necessarily reflect the official policy or position of DailyO.in or the India Today Group. The writers are solely responsible for any claims arising out of the contents of this article.