Kathua: Growing cries for justice for 8-yr-old show it's about humanity, not Hindu-Muslim divide

There are still people who will not let you lose faith in humanity.

Much like terror, crime has no religion, no nationality either. But, a section of the Hindu right-wing groups believe that holding the Tricolour gives them the licence to do anything in the name of nationalist sentiment. For them, flashing the Tricolour, even in favour of a rape accused, is show of love for motherland - "Bharat Mata Ki Jai".

On February 17, when the crime branch of Jammu and Kashmir Police initially arrested two cops in connection with the gang-rape and murder of an eight-year-old in Kathua district, a Muslim nomad girl, mainstream politicians took part in a rally organised by the Hindu Ekta Manch, a right-wing forum constituted overnight in support of the accused. Since then, there has been unending support for the accused on communal and political lines.

On March 1, two BJP ministers in the state government, Choudhary Lal Singh and Chander Prakash Ganga, rallied in support of the Hindu Ekta Manch. On April 9, lawyers from Kathua Bar Association staged protests in a bid to prevent the crime branch from filing a chargesheet in the case. 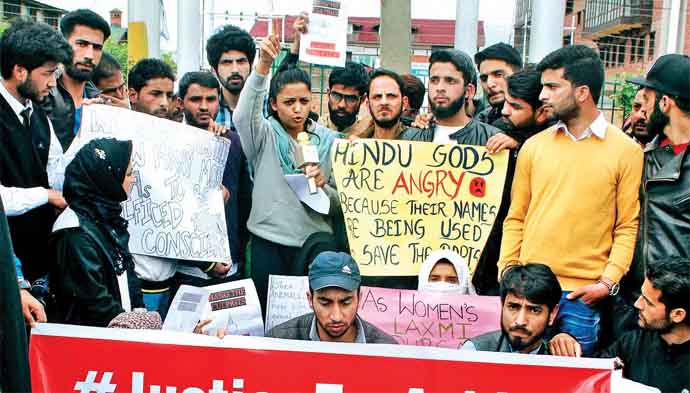 The gruesome details in the chargesheet reveal how the child was abducted, drugged and repeatedly raped inside a temple. But all this constitutes only one part of the story.

If the brutal attack on the child has sent shockwaves throughout the country after details of the police chargesheet emerged, it’s mainly because of the efforts of people from the Hindu community that the case has seen major breakthrough.

Undeterred by communal hatred, a Kashmiri Pandit police officer, Ramesh Kumar Jalla, continued to investigate the case and established details of how the girl was gang-raped inside the temple.

Jalla, the senior superintendent of police and supervisor in the case, completed investigations in a record time of 80 days as against the 90-day deadline fixed by the high court, which is monitoring the investigations.

In an interview to Asia Times, Jalla said he is relieved to have filed the chargesheet and that he had "a sound sleep after over two months".

But Jalla is not the only one from his community.

On the legal front, Deepika Thusoo Singh, a Kashmiri Pandit lawyer, is fighting the case. Braving all odds and threats to life from the fringe groups, including fellow lawyers, Singh is pursuing the case in the Jammu and Kashmir High Court.

Interestingly, while the national media has shown wider concerns towards the case only after the filing of chargesheet, initially even the local media houses in Kashmir region were largely silent.

For around a week, a leading Srinagar-based English daily was reluctant to even report allegations of rape even though the incident rocked the state Assembly that time.

Initially, it was Monika Jamwal, a woman journalist from Jammu who religiously reported about the case in Punjab Kesari and started a social media campaign. A Muslim majority Kashmir, on the other hand, was silent for around a month.

For separatist leaders like Syed Ali Geelani, it took a fortnight to merely condemn the incident. Otherwise known for giving hartal calls on every rights abuse, the Hurriyat didn’t give even one exclusive shutdown call in the eight-year-old's support.

Although the case is gaining momentum, the Muslim minority in India will always have one question: What would have been the general reaction if, god forbid, it was not a Muslim but a Hindu girl raped inside a mosque?

But then, crimes like the Kathua case is not about religion, for no religion preaches crime.

Although the Jammu Bar Association had given a strike call on April 11 against the filing of chargesheet, the Jammu Chamber of Commerce and Industries declined to support it.

Distancing itself from the bandh call, JCCI President Rakesh Gupta said: "We worship Maa Lakshmi and Maa Durga. We can't communalise rape and murder of an eight-year-old girl. It’s a heinous crime. The perpetrators, be it Hindu, Muslim or Sikh, whoever they are, should be punished."

The growing cries for justice for the eight-year-old has one more message: Regardless of religious and political ideologies, there are still people who will not let you lose faith in humanity.

Also read: If the rape and murder of 8-year-old will not wake us up, nothing ever will

#Jammu, #Communalism, #Hindutva, #Kathua rape
The views and opinions expressed in this article are those of the authors and do not necessarily reflect the official policy or position of DailyO.in or the India Today Group. The writers are solely responsible for any claims arising out of the contents of this article.