It's unbecoming of a chief minister to take to abusing veteran mediapersons such as Shekhar Gupta when faced with tough questions on chikungunya.

Arvind Kejriwal is racing to join the league of a new crop of world leaders. If he isn’t there yet — on the global stage — he might soon be.

The Delhi CM has hit a new low in public discourse by employing abusive and uncouth language for political opponents and journalists. That’s how Kejriwal reacted to veteran journalist Shekhar Gupta’s tweet on the government's lack of preparedness in arresting the chikungunya outbreak in Delhi. Gupta hadn’t said anything that a journalist is not supposed to.

But the AAP chief's response was vitriolic at best. 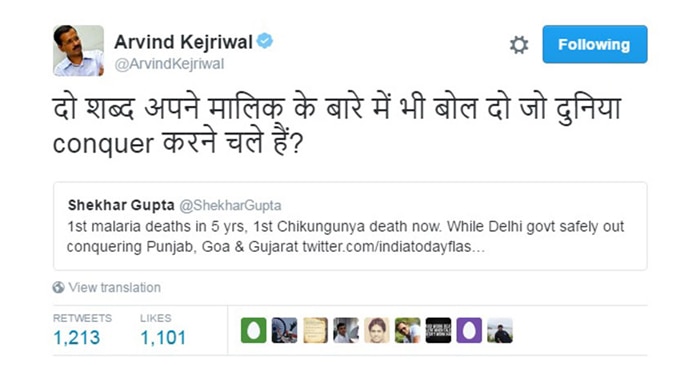 Such rage over a tweet about the lives lost to a vector-borne disease! Is it a crime to remind the Delhi government of its responsibility?

From Donald Trump in the US to Philippines’ Rodrigo Duterte, from British foreign secretary Boris Johnson to Delhi chief minister Arvind Kejriwal — politicos are becoming more intolerant of critics and criticism. Frothing at the mouth is the way to communicate and conduct new politics.

This is a man who came to power on the promises of practising an alternative politics. Two things that can’t ever be part of an alternative vision of politics are intolerance and the lack of humility - qualities that Kejriwal has in abundance.

That’s the reason the Delhi CM's persona reminds one of Trump and Duterte. His arrogance and rude conduct have taken the public discourse to a worse place even by the standards of run-of-the mill politicians who imbibe the art of carrying themselves as pubic figures even before they attain prominence and ascend high offices of power.

If Trump has the world on the edge with his thoughts on Mexico, Muslims and Europe, his misogynistic comments, especially targeting journalists, are outrageous to say the least.

"Ariana Huffington is unattractive, both inside and out. I fully understand why her former husband left her for a man – he made a good decision,” Trump said about the lady who made Huffington Post an Internet rage.

The US presidential hopeful had this to note about Fox News anchor Megyn Kelly: “You could see there was blood coming out of her eyes, blood coming out of her, wherever." But even Trump pales compared to Philippines’ president Rodrigo Duterte. He called Obama “son of a whore” a day before he was to meet the US President at the ASEAN summit. Obama cancelled the meeting after his remark.

World leaders were amused no end when British prime minister Theresa May appointed Boris Johnson as foreign secretary. Johnson, a former columnist, had been writing outrageous stuff about European and international leaders.

An active Brexit campaigner, Johnson alarmed people when he said in an interview that “Napoleon, Hitler and various people had tried” to unite Europe but failed. He had described Hillary Clinton as looking like a "sadistic nurse" and said about Obama that he had a grudge against Britain because of his “part-Kenyan heritage.” He has used much worse expressions about Turkey’s President Recep Tayyip Erdogan and many others.

Politicians and journalists maintain one unwritten code of conduct. Journalists will write, comment and criticise and the politicians will take the high road and move on. Break the rule and the very basis of the relationship crumbles. Kejriwal has turned the principle on its head.

Name calling not done @ArvindKejriwal because of diff in opinion. How diff then from language used by your rivals? https://t.co/AzPSOmiKRe

Kejriwal is a young player in Indian politics. He is the product of an age that is intolerant of dissent and criticism, where decency is in short supply and rudeness an asset. 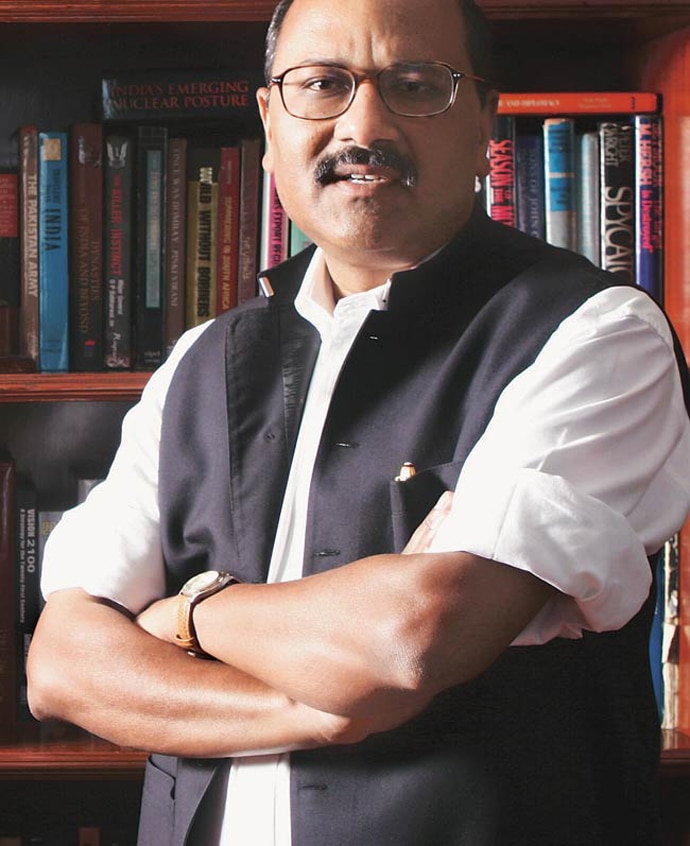 Shekhar Gupta hadn’t said anything that a journalist is not supposed to.

Mr Kejriwal, do you want to transform India into a place where journalists are trolled, abused and threatened by chief ministers?

It’s hard to recall even a single instance in which our most powerful and popular leaders used such uncivil language to respond to journalists. Does anyone recall Indira Gandhi ever having used an uncivil word for any journalist despite that during Emergency her government locked up journalists?

Does anyone recall an episode in which Rajiv Gandhi verbally abused journalists, though he threatened to bring an anti-media bill in Parliament? Arun Shourie would have landed in jail if had pursued Arvind Kejriwal the way he tailed Rajiv Gandhi.

How much criticism Dr Manmohan Singh endured! As did other previous PMs like Atal Bihari Vajpayee, VP Singh and Chandrashekhar.

Bal Thackeray, one of the most feared politicians under media watch, wouldn’t ever use the sort of words for journalists as Kejriwal does. J Jayalalitha, the empress-like, reclusive chief minister of Tamil Nadu, is careful with her words and deeds when it comes to media interactions.

AAP leaders might say their leader trolls, but doesn’t put journalists behind the bars. We are lucky the Delhi chief minister has no powers to send journalists to jail. Kejriwal would not think twice before doing so. Let India not change through your political revolution, Mr Kejriwal!

And you deserve to be lauded for aspiring to be in the company of Trump and Duterte!

Also read: Does Delhi have a troll for chief minister?

#Trolls, #Shekhar Gupta, #Arvind Kejriwal
The views and opinions expressed in this article are those of the authors and do not necessarily reflect the official policy or position of DailyO.in or the India Today Group. The writers are solely responsible for any claims arising out of the contents of this article.