Why O Rajagopal, BJP's first legislator ever in Kerala, is having the last laugh

Now that the jinx has been broken, the stage is set for saffron party to take off in the state.

Yes, he did it. BJP’s veteran leader O Rajagopal made history in Kerala by winning the Nemom seat, a constituency on the outskirts of Thiruvananthapuram to become the first MLA representing the saffron brigade in a heavily politicised state like Kerala, where Communists rule the roost.

Popularly known as Rajettan among BJP cadres, Rajagopal has broken the jinx to mark the entry of BJP to Kerala’s 140-member Assembly.

Rajagopal has been the face of the BJP in Kerala since the times of party’s earlier version Jana Sangh. Incidentally, Rajagopal happened to be the first BJP MP and MLA from Kerala.

Earlier, he represented Rajya Sabha from Madhya Pradesh (1992-2004) and served as the Union Minister of State (MoS) for defence and parliamentary affairs, urban development, law, justice and company affairs, railways. He was widely celebrated as a leader who took care of Kerala while he was serving as MoS for railways. 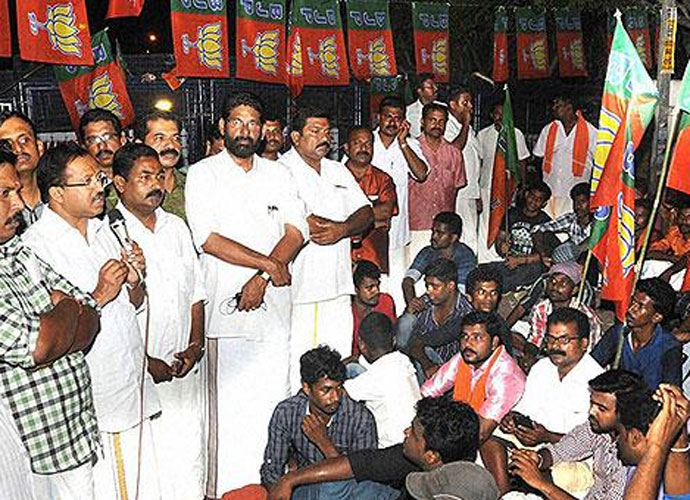 Rajagopalan's victory is the result of a well-crafted election strategy by BJP's state leadership.

He won by 8,671 votes this time, a considerably healthy victory margin when it comes to BJP’s political space in Kerala. Rajagopal’s victory should be treated as a strong message to the politics of untouchability espoused by the Left and Right fronts, led by the CPM and Congress respectively.

Born on September 15, 1929 to Madhavan Nair and O Konhikkavu Amma of Olanchery veedu at Pudukkode Panchayath in Palakkad, Rajagopal was inspired by the ideals of nationalist thinker Deendayal Upadhyaya to join the Jana Sangh. He was the state general secretary of Jana Sangh until 1974 and later became its president.

As the RSS decided to defy Indira Gandhi’s infamous era of Emergency, he was at the forefront, leading protests in the state. His election debut was in 1980, as a Janata Party candidate from Kasaragod, in which he failed.

He ran for Manjeri Lok Sabha seat in 1989. Then a series of unsuccessful election runs till 2016. His presence strengthened in the 1999 Assembly elections. Rajagopal was able to win 1,58,221 votes (20.9 per cent) and came second in one Assembly segment out of seven in Thiruvananthapuram constituency.

He surprised political experts in Kerala by securing 2,28,052 votes from Thiruvananthapuram in 2004 Lok Sabha elections. Even though he finished third behind Congress and Left candidates, his 2,28,052 votes were the highest secured by a BJP candidate in Kerala.

In the 2011 Assembly elections, he lost the Nemom constituency by a margin of 6,400 votes. He also lost the by-election from Neyyattinkara constituency in 2012.

The 2014 Lok Sabha election saw a neck and neck fight between Rajagopal and Congress candidate Shashi Tharoor where the latter had the last laugh.

In June 2015, he unexpectedly contested Aruvikkara by-election, and lost, but the BJP's votes increased from 7,694 to 34,145 in the constituency.

Despite these defeats and marginilastion by political rivals, Rajagopal has the final laugh now, which was a result of the systematic campaigning of RSS cadres and well-crafted election strategy of party’s state leadership.

The party, in combination with BDJS, was able to perform a good show in terms of vote share. Kerala, indeed, has space for a third alternative. Now that the ice has been broken, the stage is set for BJP to take off in the state.

#RSS, #BJP, #Elections 2016, #Kerala Polls
The views and opinions expressed in this article are those of the authors and do not necessarily reflect the official policy or position of DailyO.in or the India Today Group. The writers are solely responsible for any claims arising out of the contents of this article.