UDF stands to lose Kerala polls with even minorities turning away

With polling for the West Bengal elections over, all eyes are now on Kerala and Tamil Nadu which are due for polls on May 16. Kerala, for the first time in its history, is facing a triangular contest with the BJP also in the fray. So much so that there are reports that the Congress and Left have struck a secret deal to prevent the BJP from opening its account in the state.

In Kerala, minorities make up 45 per cent of the population (27 per cent Muslims and 18 per cent Christians). This proportion of minorities is one of the highest in the country.

Also read: Why Left will sweep Kerala in 2016 polls

While the state accounts for the highest Christian population in India (61 lakh), it accounts for the sixth highest Muslim population (89 lakh). These two communities, to a large extent (more than 60 per cent), have historically voted for the Congress-led United Democratic Front (UDF) in the state and this has been one of the prominent reasons for the UDF's success, as shown below.

The minorities are in a position to influence the outcome in about 60 seats. In the 2014 Lok Sabha polls for example, 64 per cent of the UDF's vote share came from minority voters. The Left, on the other hand, won approximately 39 per cent of its votes from the minorities.

Muslims are in majority in Malappuram, Kozhikode and Palakkad districts. The Christian population is the highest in Ernakulam, Kottayam and Thrissur districts. The Indian Union Muslim League (IUML) and Kerala Congress (Mani) have been important constituents of the UDF for the past few years, garnering vote shares in the range of 11-13 per cent and bagging 25-40 per cent of the total UDF seats.

The year 2011 witnessed one of the closest elections in the history of Kerala with the UDF scripting a narrow victory. It bagged 72 out of the 140 seats. The factors that led to the UDF's win were:

1. Support of the Muslims in Malappuram district, with the IUML winning 12 out of 16 seats and an additional two seats were won by the Congress.

2. UDF's stellar performance in Kottayam district, where it won five out of six seats.

While the Muslim League (20 out of 24 seats) and Kerala Congress Mani (nine out of 15 seats) maintained their influence, the Congress lost more than half of the seats it contested in (38 out of 81). The Left Democratic Front (LDF) maintained a lead in most of the districts, but could not do so in Malappuram and Kottayam, and that in the end led to its defeat. It is more than likely that the LDF will return to power.

Support for the LDF among most of the communities remained unchanged though there was a seven per cent decline in Muslim votes as compared to 2006. At the same time, the UDF received eight per cent more Muslim votes which ensured its victory.

Anchor vote segments drifting away from the Congress

With the emergence of the BJP in Kerala, the minorities are likely to resort to tactical voting for the likely winner. The BJP's tie-up with the Sree Narayana Dharma Paripalana (SNDP) Yogam has created a political storm in the state with analysts estimating 15-20 per cent vote share for the BJP.

The LDF is in a better position to take on the BJP in the state with almost every poll predicting an LDF win and minorities could switch sides in these polls. This was evident with the LDF sweeping the municipal elections. With the Left also considered to be secular and anti-BJP (no chances of them joining the NDA in future), this transition is happening smoothly.

A section of the Christians is also opening up to the idea of supporting the BJP. After all, the BJP enjoys similar support from them in Goa. For years the BJP has been working to woo this segment and this is likely to bear fruits this time around.

In our earlier article, we mentioned that Oommen Chandy was in a comfortable position amongst women and any gains either in vote share or turnout could salvage the situation for him. However, the recent Jisha rape and murder, along with other incidents of crime against women, would turn away the women voters, thereby swinging the balance again in favour of the LDF.

The following social media chart demonstrates the likely damage to the UDF. The use of social media is high in Kerala. The Jisha incident occurred on April 28 and in the matter of a week, net positive comments on social media on the state of women's safety and lives in general in Kerala went from seven per cent to -33 per cent. The UDF regime's last hope was the women's vote and now it is likely that even that is gone. 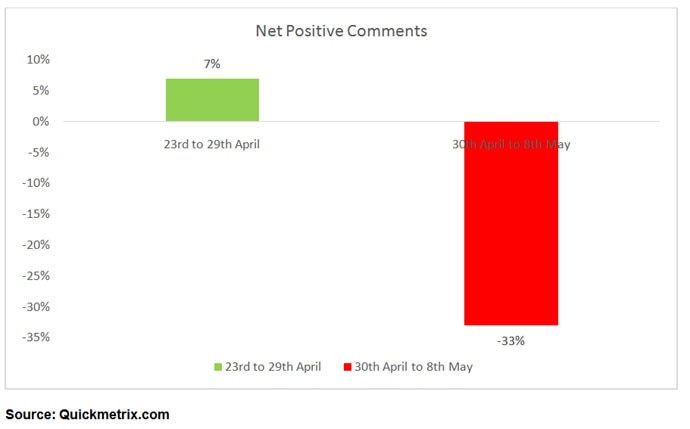 In sum, let us say that multiple forces like the emergence of the BJP and the Jisha incident make it extremely difficult for the UDF to do well among any of its anchor segments - Muslims, Christians or women. The Jisha incident is the final nail in its coffin, and come May 19, it is more than likely that the LDF will return to power. This is one time that the minorities will not be able to save the UDF regime.

#Oommen Chandy, #UDF, #Kerala Polls
The views and opinions expressed in this article are those of the authors and do not necessarily reflect the official policy or position of DailyO.in or the India Today Group. The writers are solely responsible for any claims arising out of the contents of this article.