Even the naïve would not believe that the Subhas Chandra Bose files became innocuous one day.

While the Netaji mystery has been quite a conundrum for Indians at large, the only group that has treated it like a skeleton in their cupboard has been the Congress party and the governments led by them. It is no secret today that various ministries, departments, and agencies of our government are holding several classified files about the fate of the legendary freedom fighter. Right to Information (RTI) Act of 2005 has made it nearly impossible for the government to "lie" that it does not have any classified information about Netaji. Though there are enough riders astutely concocted in the act to keep the interests of ruling parties dark, they cannot flinch from acknowledging possession of information.

Well, at least that was the trust I had in the act and our government establishments until recently. An RTI request I filed to the Prime Minister's Office (PMO) upended that impression. In March this year, I had asked the PMO whether the declassification of the Netaji files was any different from the general declassification process. The PMO then routed my request through a roller coaster ride to the Department of Administrative Reforms and Public Grievances, Ministry of Culture (!), and finally to the Ministry of Home Affairs (MHA).

The MHA sent me a communication that the matter pertains to the operations of the Internal Security (IS) Divisions 1 and 2 within the ministry and that my request has been duly forwarded to them. I received the final response this May from Ashish V Gawai, under secretary, IS-2 division, that the declassification of the Netaji files is no different from that of the general declassification process. The altruistic under secretary also gave a bonus information under the guise of helping me that the MHA had sent all the files relating to the disappearance of Netaji to the National Archives of India (NAI) on October 1, 2012 for permanent retention. From the date, it is evident that it was the Congress-led UPA government that declassified the files. 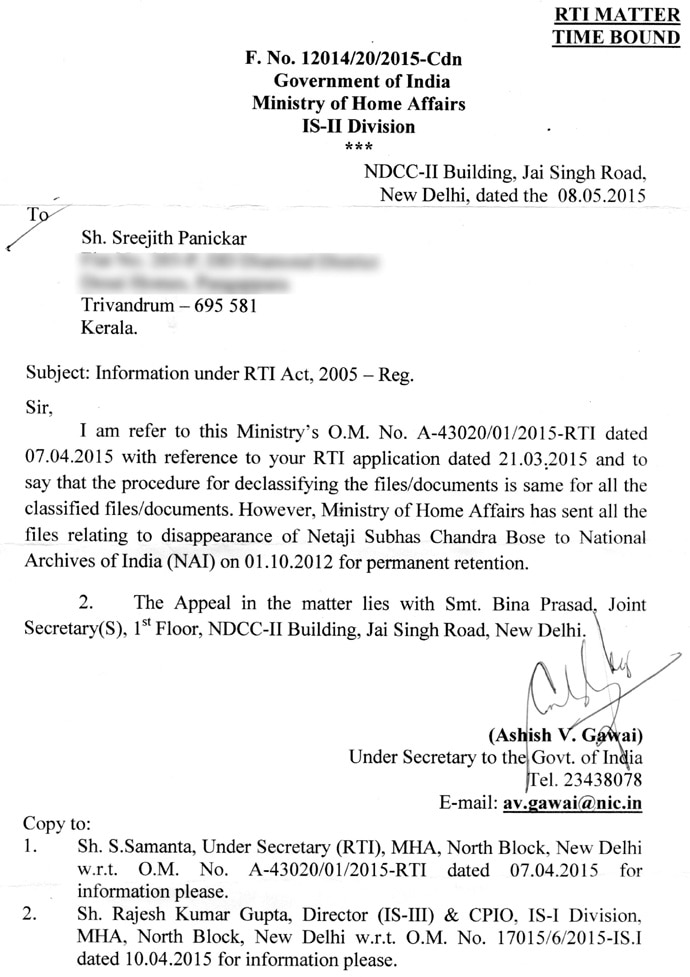 But do the elected representatives in MHA agree with Mr Gawai? It was in this April that Kiren Rijiju, Minister of State for Home Affairs, had informed the media that the UPA government had done only partial declassification of the Netaji files. He stated clearly that only some part of the files (including the #NehruSnooped files) about Bose has been declassified and that "what is needed to be done" about the declassification would definitely be done. He also assured that the government would get in touch with all agencies to collect information about Netaji which would then be informed to the public.

It is clear from an affidavit submitted to the Mukherjee commission in 2001 by the then home secretary (later cabinet secretary) Kamal Pande, that several documents about Netaji have been exempt from declassification under sections 123 and 124 of the Evidence Act and Article 74(2) of the Constitution, because the disclosure of these documents would injure public interest. 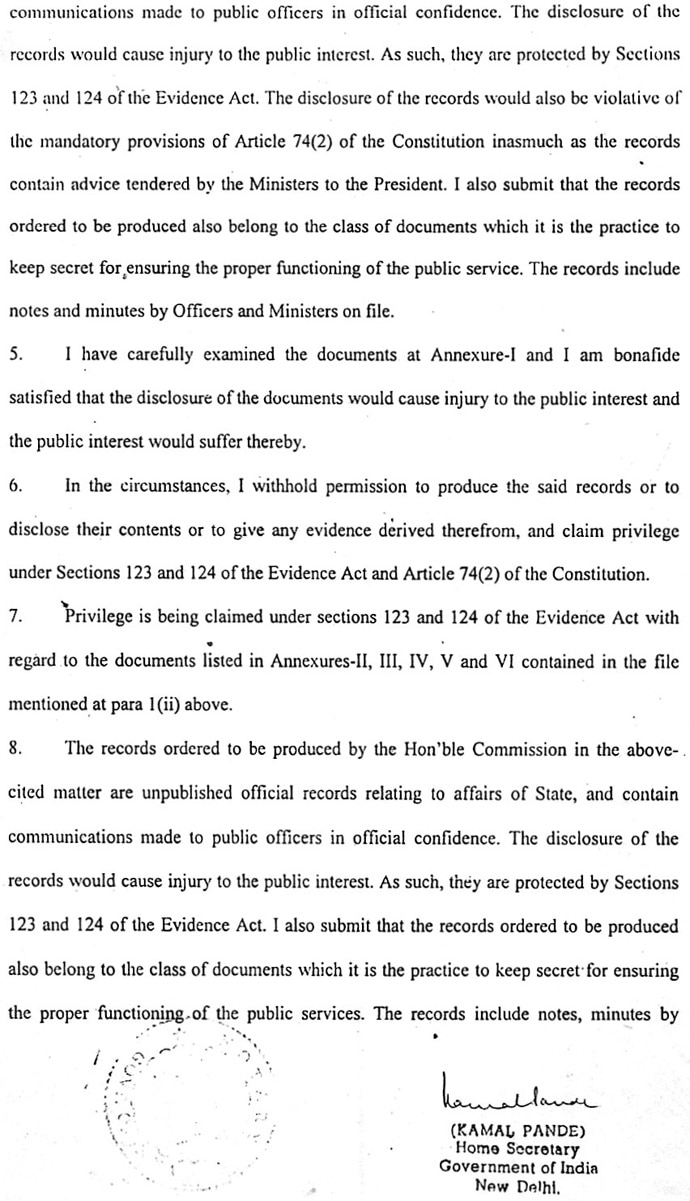 1. DO letter of even number dated 18.3.1994 from Shri VK Jain, Special Secretary, Ministry of Home Affairs to Secretary (RA&W), Cabinet Secretariat regarding disclosures made in a series of Articles based on classified KGB records.

3. DO letter No.I/12014/27/93-IS (D.III) dated 31.3.1995 from Shri K Padmanabhaiah, Home Secretary to Foreign Secretary regarding the question of bringing the mortal remains of Netaji Subhas Chandra Bose from Japan to India.

Even naïve people would not believe that these files which presaged harm from 1993 suddenly became innocuous one day, and the MHA was tempted to declassify them in public interest! It is not possible that the statements of both the minister and the under secretary can be correct at the same time. Or, the said files may have been subjected to wanton destruction, which amounts to a charge no less than high treason.

Mark Twain famously said, "If you tell the truth, you don't have to remember anything." Truth has only one version whereas lie has many. Truth is like a harmonic song which retains its qualities even when several people sing it together. The many versions in the Netaji mystery has led the elected representatives and the bureaucracy to sing not just different tunes, but entirely different songs at once. The result is a pandemonium of sorts. The centre sings a "will-declassify" song, the minister a "partial-declassification" song, and the bureaucracy an "already-declassified" song. This lack of coordination is representative of the stand of home minister Rajnath Singh who has gone senile after the pre-election brouhaha over declassification.

Right to information has literally transformed the Netaji mystery into a fight for information. The truth may still be swept under the carpet, but one thing is clear as daylight - for some inexplicable reason, the State itself has been running the decades-long mystery in all but name.

Post your comment
#Netaji, #Netaji Subhas Chandra Bose, #NehruSnooped, #Modi government
The views and opinions expressed in this article are those of the authors and do not necessarily reflect the official policy or position of DailyO.in or the India Today Group. The writers are solely responsible for any claims arising out of the contents of this article.