Kolkata flyover collapse: Who we must blame

Unfortunately, what happened was not just a stray accident.

"London Bridge is falling down my fair lady," was a nursery rhyme that we were taught to recite at a very young age in kindergarten. Unbeknownst to us at the time, this rhyme was laced with heavy political undertones, for it spoke of the collapse of the British Empire and the crumbling of its colonial rule.

The rhyme with its dark undertones came to my mind once more as I awoke to the news of the Vivekananda flyover that collapse. The urban catastrophe has injured over a 100 people and the rising toll of the dead is currently 27. It was on April Fools' Day that the flyover came crashing down, crushing people and traffic.

As urban citizens of rapidly growing, unplanned city development, we have been made giant fools by the smooth-talking builder lobby.

The flyover, which was to relieve traffic in the congested Burrabazar, a wholesale market near Girish Park, was to be constructed in two to three years but it has laboured along for the last nine years.

The construction company IVRCL contractors have cited "delay in permits" as the reason for its glacial performance; however what really takes the cake is attributing blame to God for this tragedy. One of the representatives of the IVRCL contractors, Panduranga Rao, claimed that the collapse of the flyover was an "act of God"!

While I am still pondering over why God would destroy the flyover, I am aware that legally builders do tend to wave off responsibility for such calamities by citing God and nature as the cause; however, it is only earthquakes and floods that can be attributed to God and nature. In this instance, it was neither and so the blame lies squarely with the construction company. 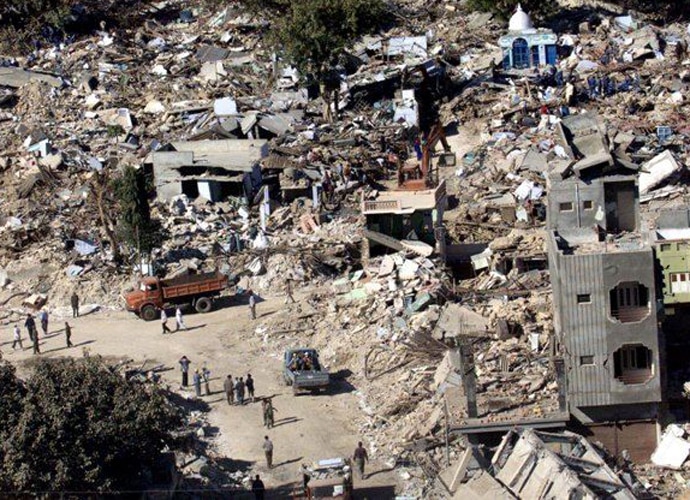 While many are debating whether it is wise or even legal to slap a homicide case against the IVRCL contractors, RK Gopalnanduri, president of the company, Pradip Kumar Saha, business manager, and Debojyoti Majumdar, assistant manager, besides five others, it stands to reason that a severe penalty needs to be meted out to the construction company because many red flags were raised during the construction of this flyover by leading architects. The IVRCL chose to ignore all the good advice given to it.

Given that there are other instances where the IVRCL contractors have lapsed in delivering quality projects - they are currently on the blacklist of the Jharkhand rural electrification project for poor performance and have been hauled up by the Naval Academy for lack of commitment in north Kerala - there should not be any doubt in the minds of the powers that be that it is high time this company was taken to task.

By and large, the builder lobby imagines it is above the law. It somehow manages to "convince" the government to construct urban monstrosities on SEZs and in this instance shell out the taxpayers' money for what can best be described as haphazard development. Builders make great presentations with their mock ups of dream homes and dream cities, but they never seem to uphold their end of the deal when it comes to quality of construction or planned and safe development.

Unfortunately what happened in Kolkata was not just a stray accident, but also showcases how corrupt and lackadaisical builders flout safety rules in the name of "urban development".

This is not the first time that a flyover has collapsed in Kolkata. In 2013, a large section of a flyover in Ultadanga fell down, killing one and injuring three. In the same year, at least 14 people were injured when a flyover collapsed on a goods train passing under it in Bihar's Muzaffarpur.

In fact, this urban malaise has struck all our fast-growing metros, whether it was Delhi that had egg on its face when the bridge built for the Commonwealth Games near Nehru Stadium collapsed, or it was the shoddy construction work seen in Gujarat where buildings fell like a pack of cards during the 2001 earthquake, taking several human lives with it.

Whether it was the haphazard construction in Chennai that led to the floods or the collapse of high-rise buildings that have come up overnight in Mumbai's hinterland Thane, construction companies are known to skip through legal loopholes and deny accountability.

The loss of human life appears to be the casualty that we constantly bear in the name of development. While it is heartening to note that the police has taken tough stand in the Kolkata instance, where they have filed charges immediately, it is not always the case that justice is meted out so quickly. The parents of the young MBA student who lost her life recently at a construction site in Madurai are still awaiting compensation.

Besides this incident, the number of dead construction workers on site is hardly reported, let alone justice meted out to the aggrieved parties. We must treat what has happened in Kolkata as a clarion call to put builders and construction companies under greater scrutiny and demanded a greater accountability from them. Better safe than sorry.

#Corruption, #Mamata Banerjee, #Real estate, #Kolkata Bridge collapse
The views and opinions expressed in this article are those of the authors and do not necessarily reflect the official policy or position of DailyO.in or the India Today Group. The writers are solely responsible for any claims arising out of the contents of this article.