The accident should not end up like another Uphaar or Bhopal tragedy.

April 1, 2016 was not a good day. The morning, newspapers reported the collapse of the Vivekananda flyover at Rabindra Sarani, near Burrabazar in north Kolkata. 21 killed, 88 injured and 78 rescued. The rescue operations continue. In 2003, the Ultadanga flyover in east Kolkata had collapsed, injuring three.

The construction of the 2.2km-long Vivekananda flyover began in 2007 and the extended deadline was August 2016. The contractor is the IVRCL group in Hyderabad against whom an FIR has been filed. The rescue operation included the National Disaster Force and using heavy equipment, the police ambulance, fire brigade and volunteers.

Chief minister Mamata Banerjee blamed the Left regime in whose term the flyover was conceived and commenced. But she had to deal with the aftermath of the disaster. 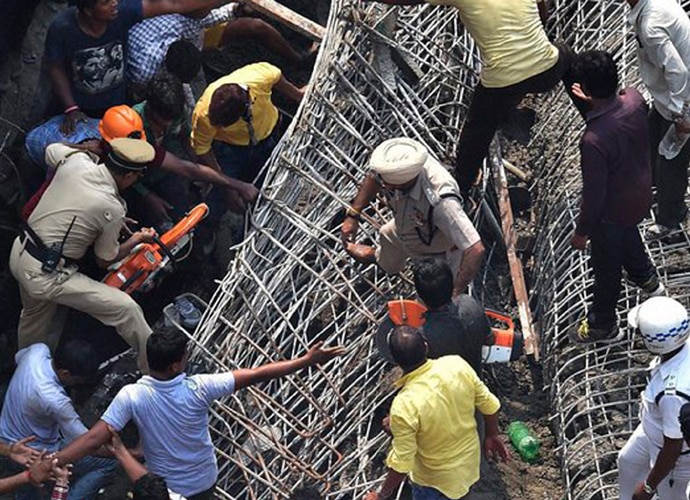 The immediate routine response is compensation: Rs 5 lakh for the dead, Rs 3 lakh for seriously injured and Rs 1 lakh for others with minor injuries. Paltry sums which seem to conclude rather than initiate the remedial aftermath. While PM Modi offered condolences, Amit Shah has begun his electioneering two days later. Politics subsumes all. The contractor defends its construction suggesting the calamity was an "act of God" attributable to nature. The costs of rescue and if properly calculated are massive.

About Rs 500 crores, it's said, is financed by the government. Re-examining the entire flyover and restoring the collapsed area will result in further thousands of crores.

How do we proceed legally? The Uphaar tragedy took place on June 13, 1997 in Delhi. The Supreme Court disposed off the criminal case unsatisfactorily on September 22, 2015. The civil proceedings, accelerated by the high court resulted in ridiculous damages by the Supreme Court as if it was a motor vehicle accident.

Bhopal has its own history. Disasters are common in India, reparations elusive. We are not sensitive to death other than of our own. The question is finding how to take reparation and restitution further.

The law of torts by civil suit will take years. An English text says: "The vast majority of tort actions are settled (or withdrawn) before the court pronounces judgment and the machinery of civil justice could not operate if this were not so."

The Bhopal Valentine Day's settlement of 1989 was at a preliminary stage and revised slightly upward a few years later amidst continuing controversy. How do we accelerate this process? The first solution is the "Nariman" solution in the Jamshedpur case.

On behalf of Tata, Fali Nariman submitted to the Supreme Court that the matter be referred to former chief justice Chandrachud whose report was accepted. Justice Variava's Delhi HC solution was not to send victims to a civil suit (with legal aid as suggested by justice Bhagwati in the Sriram Chemical's case (1987)) but to ask a writ court to deal with it. This solution worked as far as the HC bench (Mahajan and Mudgal JJ) was concerned, but it ended up in the Supreme Court which reduced damages.

The "Nariman" solution is the answer. Let the matter be filed in the High or Supreme Court. Ask for the appointment of a former chief justice (say justice Lodha) to examine the facts and estimate damages for acceptance by the court subject to scrutiny.

My preference would be the Supreme Court. The beauty of this solution is that court time is not wasted. Of course, one feature of the Nariman solution was to admit liability, leaving damages to be determined by former chief justice Chandrachud.

In the Kolkata case, the collapse speaks for itself. Lawyers call this res ipsa loquitur (the thing speaks for itself). The Nariman solution is at one with the Vairava solution in that instead of a suit, disaster cases can go the higher judiciary. The difference in that in the Nariman solution, an ex-chief justice reports on the solution for acceptance. In the Variava solution, the case was heard for days instead of appointing a committee to deal with it.

The next issue relates to quantum of damages. The SC in Uphaar case reduced the damages to unacceptable levels. One reason for this is the common law system of damages which gives little for pain and suffering, loss of life and earnings.

We have to break out of this, and also extend exemplary (make an example) damages of at least Rs 1,000 crores in this case. The court could also deal with breach of contract. But there is an aspect that has constantly baffled me.

Who pays for the rescue operations? This includes personnel, ambulances, earth diggers, cranes, equipment, and hospital treatment. True, this is the state's function, but why should the transgressor not pay for it. Rescue is by no means a "remoteness of damage".

The further issue relates to criminal investigation. The answer has to be a crack team of the CBI (with forensic experts), a dedicated team of lawyers and a special court for accelerated disposition of the case. Unless this is done, the trial will be delayed and full of holes.

Finally, construction contracts and those responsible for them need proper vetting instead of falling into the quagmire of corruption, profit and bribery. My suggestions are limited to Kolkata and other disasters.

The Nariman solution is to be recommended. I know Nariman was involved in the Union Carbide case. In his autobiography he regrets his involvement. For me, he is unblemished.

#Uphaar Fire Tragedy, #Mamata Banerjee, #West Bengal, #Kolkata Bridge collapse
The views and opinions expressed in this article are those of the authors and do not necessarily reflect the official policy or position of DailyO.in or the India Today Group. The writers are solely responsible for any claims arising out of the contents of this article.