The Christmas Day event organised by Pakistan was a charade.

The real intentions of Pakistan behind the Christmas Day meeting between Kulbhushan Jadhav and his wife and mother - with a glass partition in between - have been exposed by Maulana Ameer Hamza, one of the founders of terror outfit Lashkar-e-Taiba (LeT). That the entire event was stage-managed by Pakistan to score brownie-points against India was revealed by Maulana Ameer Hamza at a public rally last week in Rawalpindi when he said: "ISI and Pakistan government humiliated Jadhav's family during their visit to Islamabad. They also made Jadhav face his family across a glass wall… India had requested Pakistan to allow Jadhav’s mother and wife to meet him. Pakistan showed mercy and invited them. India thought that they would meet Jadhav face-to-face on a sofa, but the ISI didn’t allow it.”

1) The meeting between Jadhav and his wife and mother was a charade, meant to humiliate the Jadhav family and send a wry message to India;

2) The existence of a nefarious nexus between the Inter Services Intelligence (ISI) and Pakistan government and how the ISI choreographed the entire event though preparations for the meeting were largely between the foreign offices of the two countries;

3) The camaraderie between terror outfits and the Pakistani military establishment as Maulana Ameer Hamza was speaking at a public rally which couldn’t have taken place without the ISI's prior approval and the fact that he sought to lionise the ISI at the Rawalpindi rally.

Does it not sound weird that the leader of a notorious terror outfit praises the host country’s premier intelligence agency? Such a scenario would have been shameful for any civilised nation, but in Pakistan it is a routine. It’s not for nothing that Pakistan is repeatedly hauled over the coals by the international community over terrorism, the latest in this never-ending series being extremely tough remarks against Pakistan by US President Donald Trump. 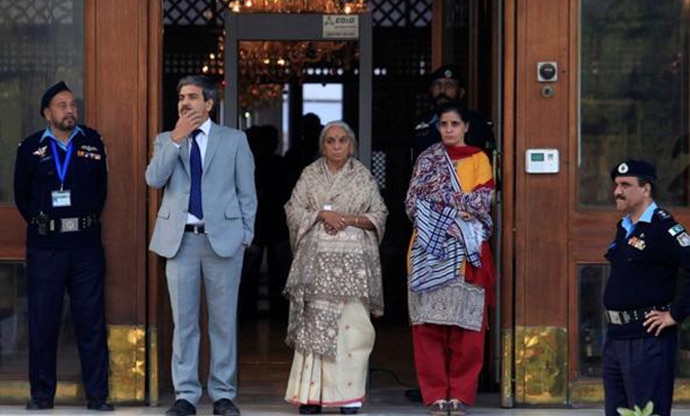 Pakistan took the extreme measure of allowing Kulbhushan Jadhav to meet his mother and wife knowing that they needed to pre-empt any strictures being passed by the International Court of Justice (ICJ).

On September 13, India submitted its written pleadings to the ICJ. Ministry of External Affairs spokesperson Raveesh Kumar, while responding to a question regarding the development, had stated that "India has…submitted its memorial (written pleadings) to the ICJ in the Jadhav case involving egregious violation of Vienna Convention on Consular Relations 1963 by Pakistan. This is in furtherance of our application filed before the Court on May 8, 2017".

Earlier in May 2017, the ICJ had stayed Jadhav’s execution by Pakistan and had asked both parties to submit their written pleadings by September 13, 2017.

Pakistani commentator Ejaz Haider had recently commented in an editorial: "That Jadhav is important for India is a no-brainer and can be evidenced by New Delhi approaching the ICJ."

One could counter that by saying thus: “That Jadhav is important to Pakistan is a no-brainer and can be evidenced by Pakistan constantly using him as a tool to pick on India sponsoring terrorism in Balochistan.”

The reality is that Pakistan got Jadhav on a platter and is using him to the hilt. It needs to be recalled that Jadhav was kidnapped in Iran and delivered to Pakistan by a faction of the Taliban working for Iran. The Taliban sold him to the Pakistanis for a price. And thereby hangs the tale.

How the meeting was a charade

Pakistan first announced that they would accede to the Indian request to let Jadhav’s family meet him in Pakistan and promptly provided visas for the same on December 20, 2017.

However, it is noteworthy that Pakistan did not grant consular access to any authorised personnel of the Indian Mission in Islamabad prior to the meeting, but instead only permitted the family to meet Jadhav.

The meeting on December 25 was more of a charade than a meeting on humanitarian grounds. Importantly, the family was not allowed to converse in Marathi with Jadhav, to ensure that the Pakistanis could understand what exchange took place between the prisoner and his family.

The family’s meeting with Jadhav, according to their own version, showed that Jadhav was under stress and spoke under coercion. Pakistan subsequently claimed that the procedure followed for the meeting, including asking the mother and wife to change their attire, had been agreed to by both countries in advance, a fact which India has firmly denied.

Earlier in September last year, Pakistan's foreign minister Khawaja Muhammad Asif, let out a canard that there was a proposal for a swap between Jadhav and a Pakistani who was involved in the Peshawar Army Public School attack and was said to be in Afghan custody. Asif claimed that India’s NSA Ajit Doval had told him that India could exchange that terrorist with the "terrorist" Pakistan had, namely Jadhav.

Asif made these remarks while speaking at the Asia Society in New York, but the idea was quickly shot down by both India and Afghanistan. The issue of a swap may well have been discussed at some stage, but there appears to be no reason why Afghanistan should give their acquiescence to an Indian request to let off a known Afghan terrorist in their custody.

Furthermore, if one goes back to reports of the terrorist strike at the APS Peshawar, there were six terrorists involved in the attack - one Chechen, two Afghans and three Arabs. In the rescue operation carried out by Pakistani Special Services Group, all six terrorists were killed. So who is this special guy the Afghans were holding on to as Asif claimed in September 2017?

The mastermind of the Peshawar attack Omar Khorasani, was killed in a drone strike in October 2017.

So much for Pakistan's claims of being the honest dealer and allowing India to meet with the family of commander Kulbhushan Jadhav. By the way, Jadhav is not a serving Indian Navy officer and had, in fact, retired in 2001. He had been working independently in Chahbahar Port in Iran since 2003.

At the time of his arrest in March 2016, the Pakistani establishment planted a fake passport on him in the name of Hussein Mubarak Patel and claimed that he was a spy who had worked for India’s external intelligence agency, Research and Analysis Wing (RAW) since 2013.

The Pakistani narrative has always held that he is an active naval officer, a claim that appears false because of two things. First, India would not send a serving naval officer as an undercover agent to Iran. Second, if the officer was serving and had been posted to Chahbahar in uniform he would have diplomatic cover.

Meanwhile, on December 25 last year, Iranian Parliament speaker Ali Larijani (a Shia country that the Sunni Pakistan is frantically trying to become close to), while addressing a news conference in Islamabad after attending a six-nation anti-terror conference in Islamabad, said: “Kulbhushan was doing business in Chahbahar and we had no information about him being a spy. The security institutions of both countries (Pakistan and Iran) had already exchanged information in this regard.”

It is time for India to call Pakistan’s bluff and continue to work with the international community and increase pressure through the ICJ to get consular access to Jadhav. India must make all efforts to ensure that Jadhav is brought back to India alive. That would be a fitting honour for a former naval officer and an Indian national who deserves better than being a pawn in Pakistani hands.

Also read: Why India was wrong in taking Kulbhushan Jadhav's case to International Court of Justice

Post your comment
#ISI, #LeT, #Pakistan, #Kulbhushan Jadhav
The views and opinions expressed in this article are those of the authors and do not necessarily reflect the official policy or position of DailyO.in or the India Today Group. The writers are solely responsible for any claims arising out of the contents of this article.