Khadi, Modi, Gandhi - which is the real brand?

Khadi can embellish Brand Modi but there is little risk of Khadi becoming Modi.

The vast universe of non-RW trolls have found their topic of weekend outrage in the new Khadi Village Industries Commission (KVIC) calendar featuring Narendra Modi in place of the "Father of the Nation", Mohandas Karamchand Gandhi.

Unlike in the case of demonetisation, when economists were quick to jump into the fray, so far we have not heard any brand expert commenting on the subject, except one solitary Haryana minister, Anil Vij.

The minister said: "Narendra Modi is a bigger brand than Gandhi and next, his photograph should replace Gandhiji's on currency notes." But, this is a point worthy of debate that the evening prime time TV anchors seem to have also missed.

In marketing theory, even iconic brands need to be periodically refreshed. A quick Google search will reveal how some of the biggest brands have undergone image transformation over the years.

Lux soap has a new filmstar every year and female actors are not considered to have truly arrived until they make it as a Lux model. Similarly, Pepsi changes its cricket stars with the new flavour of the season.

Even though John Walker and Mr Daniels keep walking, as does the Marlboro man in the wild west, our homely Bagpiper keeps getting younger with each passing generation. Advertising annals are replete with such examples. But, in each of these instances the moot question to be asked is, which is the brand - the product or the person (brand ambassador)? 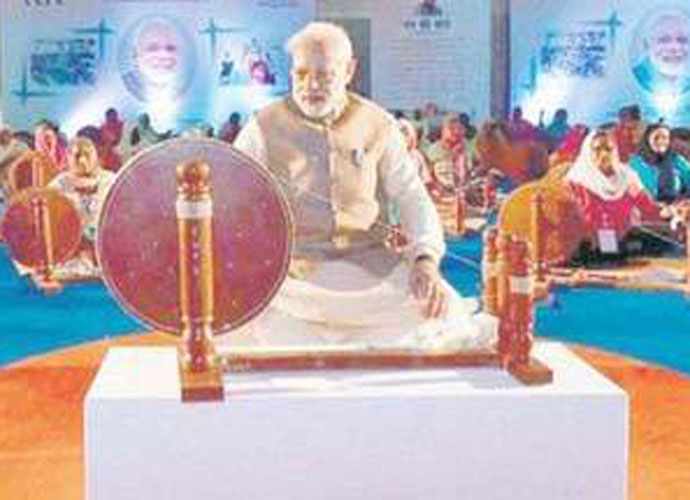 One way to approach it would be by asking the classical brand positioning questions:

So who or what is Khadi - is it a textile, a way of life or an idea?  And, for whom really is Khadi?  The answers to these three questions will lead to the fourth.

Gandhiji had conceived of Khadi as a movement and an instrument of struggle against British commercial imperialism. From there it became a way of life for those who believed in the cause.

Non-violence and Swadeshi were both indistinguishably identified with Gandhi - as a result the Brand and the Product became the same. Even after Independence, as India was on a mission to become self-reliant as an economy and find livelihood for millions living in villages, the philosophy remained relevant and a direct association with Gandhi was a reminder of that ideal.

That economic rationale remains true even today. But, it is no longer an end in itself but a means to the end of supporting the rural economy. The challenge has, therefore,  become largely commercial.

It is a fact that now the village handlooms, artisans and cottage industries are being supported in a very big way by large private enterprises, which have set up backward linkages in their supply chain for both the domestic and export markets.

What these businesses are selling are not fabric, food products and natural toiletries - but a lifestyle statement. Like the signature jhola of Leftist intellectuals has now been replaced by cotton kurtas of an ethnic brand.

To compete with them, KVIC needs to become marketing savvy. However, its mandate has to be made clear as to whether it is preservation of Gandhiji's legacy or have a viable business model.

It may be argued, why can it not be a combination of the two? For that we need to revisit the four fundamental questions once again. If the answers to those have changed over the last 70 years, then there is definite need to reinvent the marketing strategy by going back to the drawing board.

In such a context, Khadi will have to become the "Brand" and  the "Hero". While Gandhiji can still represent the brand-heritage or inspiration (like say, the bearded Colonel Sanders of KFC), Modi can at best be a "brand ambassador".  A natural analogy can be Denim - which makes more of a statement at many levels no matter who or how hot the model is.

From a marketing practitioner's point of view, those fretting over Brand Khadi being appropriated by Modi need not lose sleep. Khadi can embellish Brand Modi but there is little risk of Khadi becoming Modi.

There are many counts on which Modi can merit consideration as a model for Khadi. He is one who can straddle between tradition and modernity with ease. It can break the archetypical image of Khadi as a poor man's fabric - if someone who wears a Rs 1 million suit also dons the humble Khadi.

However, selection of a brand ambassador is always tricky. Remember, from my novitiate days, the company I used to work for wanted to launch a new brand of "Kadak Chai" with CTC leaf-tea, known for strong liquor.

To save on cost, the marketing manager chose one of his colleague, who sported a thick curly moustache as the model, for his macho looks.

Over the years, that particular brand became a favourite of north Indian truck-drivers available only at dhabas - as instead of the original positioning of "Strong Tea for Men" it came to be perceived as "Tea for Strong Men".

The marketing wizards at KVIC should be mindful of such pitfalls. Otherwise, they can end up inadvertently positioning Khadi jackets for only size 56 chests.

Also read: Khadi is equating Modi with Gandhi - and it's absurd

Post your comment
#Narendra Modi, #Mahatma Gandhi, #Khadi
The views and opinions expressed in this article are those of the authors and do not necessarily reflect the official policy or position of DailyO.in or the India Today Group. The writers are solely responsible for any claims arising out of the contents of this article.