From WhatsApp messages to online memes: Lok Sabha elections in the time of social media

Whatsapp, Facebook, Twitter and even hilariously mocking memes were the weapons of choice for political parties during Lok Sabha 2019. Interestingly, these were used directly also by voters themselves.

This election is sure to go down in the annals of history. Not for the issues in the manifestos, the political oratory or even the many controversies, but for the social media savvy of the politicians vying for a majority.

From follower count to usernames being changed to show political allegiances (Chowkidars, anyone?) and witty hashtags to one-up each other, the Lok Sabha Elections 2019 stands out for using the Internet as a campaign tool. In such a scenario, instant-messaging service WhatsApp also played a big role.

Indian voters have been more involved in the electoral process than ever, avidly sharing campaign speeches, exchanging narratives on WhatsApp to choose the next Prime Minister of India, who will serve them till 2023. According to a survey by the Centre for the Study of Developing Societies (CSDS), the number of active WhatsApp users in rural India has doubled since 2017 — in fact, India is the instant-messaging app’s largest market with over 200 million users.

Earlier, politicians took the pain to canvas in their constituencies and were often criticised for their lack of campaigning and involvement if the voter turnout was subpar — but thanks to social media, they seem to be breathing easy. For one, their popularity online rather than on ground-level will be reflected in the number of votes because, thanks to social media, there are many other ways of approaching voters, and sharing their ideologies to secure their seat for the next five years.

Another important change in the polls this time is the awareness around the women vote base. Both political leaders — as well as Indian women — have realised the importance of female power. In the pre-Internet era, women were rarely involved in decision-making even inside their homes, leave alone political ones. But that is not the case any more. The digital medium has empowered every Indian woman, be it a housewife or a lady in the corporate workforce. They are more involved in the politics around them, a far cry from the times when they used to just cast their votes in favour of the party their husband or father was supporting.

So, voting is no longer a family affair — and this will certainly influence the parties’ numbers, especially because now one family may have voters supporting different political parties. 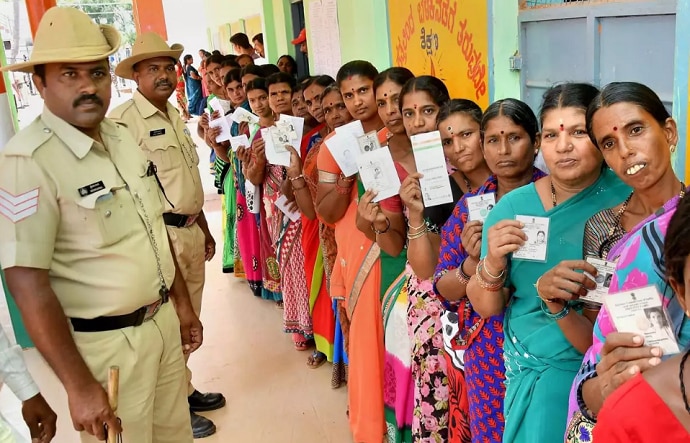 This realisation has hit the political leader as well; take, for instance, the women-centric schemes introduced by Prime Minister Narendra Modi, such as the Ujjwala Yojana, Beti Bachao, Beti Padhao and many others. Another important determining factor is also the treatment of women within political parties — former Congress spokesperson Priyanka Chaturvedi’s resignation after alleging that her party had shielded miscreants who had apparently harassed her, struck a chord with many Indian women. Despite damage control, this incident is expected to seriously dent the party’s women voter base.

Deeply saddened that lumpen goons get prefence in @incindia over those who have given their sweat&blood. Having faced brickbats&abuse across board for the party but yet those who threatened me within the party getting away with not even a rap on their knuckles is unfortunate. https://t.co/CrVo1NAvz2

Despite all the perks of online campaigning, there may just be an additional pressure on the political parties to provide their followers with one-of-a-kind content, just like social media influencers do to remain relevant. So, they stick to narratives such as 'a young man from an illustrious political lineage, who lost his father in the service of the nation' for Rahul Gandhi, and a 'rags-to-political royalty-but-still-humble' trope for PM Modi.

Apart from pushing content around these themes, there is plenty of entertainment for voters too, following each political party’s social media handle. Remember when the BJP and Congress locked horns on Twitter with a rap battle of sorts? While the voters were thoroughly entertained, the pressure must have been immense to put out new-age material such as this while still maintaining their loyal old-timers. A tough task indeed!

This is where the role of creative hashtags and memes comes in. It is safe to say that the political name-calling such as Feku, Pappu, Chaiwalla, Chowkidaar Chor, et al have now become a part of our everyday lingo, each becoming trending hashtags.

Hawk-eyed millennial voters are having a field day by creating or sharing various memes and jokes about popular leaders on Whatsapp. The power of these memes can be easily gauged from the recent incident in West Bengal when a BJP worker was arrested on the complaint of a Trinamool Congress worker for creating a hilarious meme about Chief Minister Mamata Banerjee. While the entire nation was in splits, the joke was lost on TMC.

That joke might not be the only thing the TMC now loses.

Also read: PM Modi’s Uttarakhand trip: 5 things no one is talking about

#Lok sabha election exit poll, #Mamata banerjee meme, #Priyanka Chaturvedi, #Rahul Gandhi
The views and opinions expressed in this article are those of the authors and do not necessarily reflect the official policy or position of DailyO.in or the India Today Group. The writers are solely responsible for any claims arising out of the contents of this article.