The Great Andhra Battle: Will Jaganmohan indeed emerge as darling of the masses and AP's new CM?

Having witnessed high-voltage campaigns and vivid drama, and after casting their vote through a violent polling day, the Telugu states will be in some political lull for the next 42 days.

Andhra Pradesh and Telangana will suffer from what I would call political constipation for the next 42 days as the counting of votes for the election conducted in both the states on April 11 would be taken up only on May 23.

Polling in Andhra Pradesh was dotted by bloody incidents at different places, with workers of the Telugu Desam Party (TDP) and the YSR Congress Party (YSRCP) clashing, bearing lethal weapons — registering two deaths and injuries to many others.

In complete contrast, Telangana proved to be the most peaceful state in this election — with no reported incidents of even unpleasantness.

Andhra Pradesh Assembly Speaker Dr Kodela Sivaprasada Rao was attacked by his rivals in Sathenapalli Assembly constituency in Guntur district — he is now seeking re-election from the same place. He was physically assaulted. He, however, went ahead with torn clothes for voting. A YSRCP worker was killed in Thamballapalle Assembly constituency in Chittoor district. Polling was marred by clashes between the two parties at different places with incidents of violence.

Death of a worker — and an EVM

It was a show of violence against instruments even when Jana Sena candidate Madhusudan Gupta smashed the Electronic Voting Machine (EVM) in Gooty Assembly constituency of Anantapur district.

#WATCH Jana Sena MLA candidate Madhusudhan Gupta smashes an Electronic Voting Machine (EVM) at a polling booth in Gooty, in Anantapur district. He has been arrested by police. #AndhraPradesh pic.twitter.com/VoAFNdA6Jo

In the same district, at Veerapuram village in Tadipatri Assembly constituency, TDP and YSRCP groups clashed with sickles, the fight leading to the death of a TDP worker, Chintha Bhaskar Reddy. YSRCP worker Pulla Reddy was also grievously injured and is reportedly grappling between life and death. With Tadipatri being notorious as a factional area where group clashes are common especially during elections, the outbreak of violence in Veerapuram has come as tragic but not as a big surprise.

The feud of the families

Allagadda Assembly constituency in Kurnool district is also not new to the tradition of bloodshed during the polls — this time, it was a feud between two warring family factions. On the one hand, Tourism Minister Bhuma Akhilapriya, who was elected on a YSRCP ticket in 2014 in a by-election caused due to the death of her mother, Bhuma Sobha Nagi Reddy, is seeking re-election against her traditional arch rival’s family, the Gangulas. On the other hand, the YSRCP fielded no less than Gangula Bijendranath Reddy, son of the party MLC Prabhakara Reddy and the scion of Akhilapriya’s nemesis family, against her.

The drama was unlimited: the minister squatted on the road, alleging that the YSRCP camp had kidnapped the TDP’s polling agents. This was, however, denied by YSRCP leaders — obviously.

However, tension gripped Allagadda with both groups coming to blows. 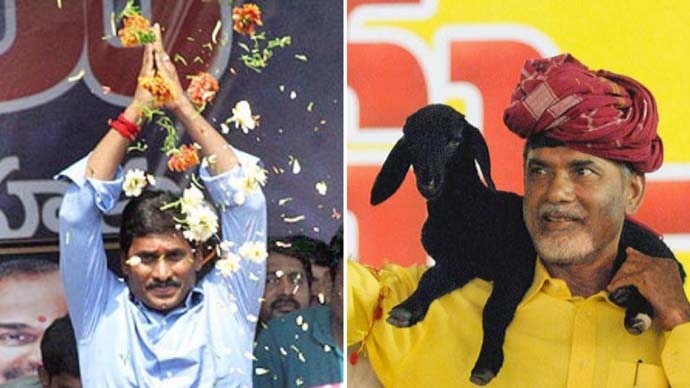 Jagan vs Chandrababu: A vote "for change" or more of the same? The big answer is on May 23. (Photo: DailyO)

Desperation, they say, leads a man to bad decisions — the TDP story was no different. Here, desperation seemed the root cause of electoral violence. The TDP has been raising a bogey against the Election Commission, and has not ceased whining about it. The ECI’s decision to strip the Additional Director-General of Police of Intelligence, AB Venkateswara Rao, of his duty triggered a turf war between the political party and the ECI. The ECI eventually transferred several Superintendents of Police and some lower-rung field-level police officials. The final blow was the shifting of the Chief Secretary of the State Government.

On the morning of polling day, TDP began to allege that 30% of the EVMs were not functioning — TDP supremo Chandrababu Naidu alleged the same to news channels and urged voters who could not cast their vote to go back and demand to exercise their franchise. TDP spokesperson Varla Ramaiah demanded that repolling be held in 30% of the polling stations where EVMs were alleged to be not working.

However, the Chief Electoral Officer (CEO) Gopalakrishna Dwivedi promptly gave a statement, condemning the “organised campaign” against fully functional EVMs. He appealed to the people not to be carried away by such baseless rumours.

The YSRCP made the most of the “non-working EVM” drama — it promptly ascribed the blaming of EVMs as a ploy by the ruling party to shield itself from embarrassment upon the declaration of results.

Internally, the mood in the TDP camp was sombre as Naidu, his wife, his son and minister Lokesh, and Lokesh’s wife, Brahmani, cast their votes in Undavilli in the capital region of Amaravati.

However, the TDP spared no effort in trying to portray the confidence of expecting a landslide victory owing to Naidu’s vision and plan for the state, besides the development projects already undertaken.

After 110 public meetings and relentless preparation for a landslide victory, @ncbn relished some much-needed quality time with the family. He caught up with @naradevaansh stride for stride setting some jolly grandpa-grandson goals 😀 pic.twitter.com/WZz4nIcYzT

But the party's celebratory expression certainly seemed a tad hollow.

On the other hand, when YS Jaganmohan Reddy, his wife, his mother VIjayamma, and sister Sharmila cast their votes in Pulivendula Assembly constituency (from where Jagan is seeking re-election) the mood was perceptibly upbeat.

The ambience in the state is palpable.

A confident Jagan has declared that he is winning — and that the people of Andhra Pradesh have ended Chandrababu Naidu's draconian era with their votes.

While the YSRCP claims that this is a “vote for change”, the TDP is exuding confidence that the schemes of the state government would see the party sail through.

The Telangana Rashtra Samithi (TRS) supremo and Chief Minister K Chandrasekhar Rao, who sailed first with YSR Reddy in 2004, and then with Chandrababu Naidu in 2009, eschewed both and went alone in 2014. He, with his master strokes at regular intervals, has uprooted the TDP in Telangana and decimated the Congress.

In a very cleverly calculated move, KCR had the Assembly election advanced by four months and consolidated his power in the state. When it comes to the Lok Sabha polls, “fighting the elections” turned out to be nothing more than a cliché for the TRS — one need not be very surprised if the TRS bags at least 15 — or all the 16 — of Lok Sabha seats in the state, considering extensive backing of the AIMIM supremo Asaduddin Owaisi in Hyderabad Lok Sabha seat.

Jagan in Andhra has KCR’s full backing from Telangana.

The question of whether Naidu’s cycle will ride over Jagan’s fan, and whether it will be a pink (the colour of TRS) rain in Telangana, will be answered on May 23.

Till then, as mentioned, it will indeed be some political constipation in the region.

Also read: The most complex and complicated election in the offing in Andhra Pradesh

Post your comment
#TRS, #YSR Congress, #Tdp mlas killed, #K Chandrasekhar Rao
The views and opinions expressed in this article are those of the authors and do not necessarily reflect the official policy or position of DailyO.in or the India Today Group. The writers are solely responsible for any claims arising out of the contents of this article.