Lok Sabha 2019: BJP President promises politics of exclusion. Why we must worry

Amit Shah reportedly promises to remove every single 'infiltrator' from India. But the sections he includes under 'infiltrators' is not very helpful to the secularism of this country.

Even as the BJP is facing trouble with the National Register of Citizens (NRC) in Assam, party chief Amit Shah added fuel to the fire by reportedly saying the NRC would be implemented throughout the country — if his party forms the next government.

In a tweet put out by the BJP's official handle, Shah was quoted saying, “We will ensure implementation of NRC in the entire country. We will remove every single infiltrator from the country, except Buddha, Hindus and Sikhs.”

We will ensure implementation of NRC in the entire country. We will remove every single infiltrator from the country, except Buddha, Hindus and Sikhs: Shri @AmitShah #NaMoForNewIndia

He apparently made the statement at a rally in West Bengal on Thursday.

The part of the tweet that lent itself to immediate controversy, however, was the religions included. This is consistent with the controversial Citizenship (Amendment) Bill, 2016 that the BJP had moved in Parliament. With the Bill, the government plans to change the definition of illegal migrants. The Bill, introduced in the Lok Sabha on July 15, 2016, sought to amend the Citizenship Act, 1955 to provide citizenship to illegal migrants, from Afghanistan, Bangladesh and Pakistan, who are of Hindu, Sikh, Buddhist, Jain, Parsi or Christian extraction. 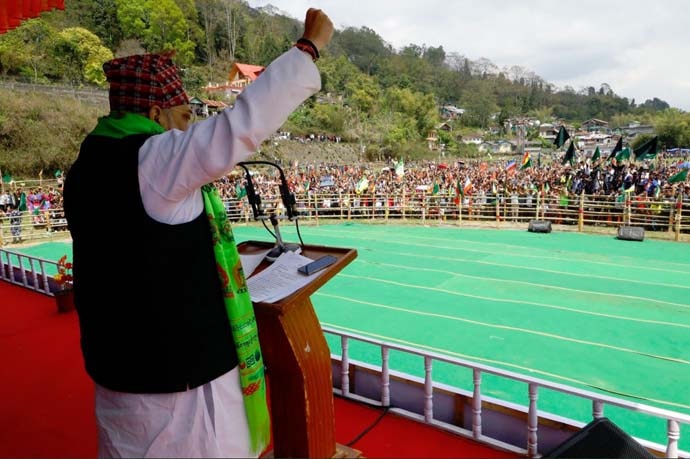 However, it does not have a provision for Muslim sects, like Shias and Ahmediyas, who also face severe persecution in Pakistan.

The Bill also seeks to reduce the requirement of 11 years of continuous stay in the country to six years to obtain citizenship by naturalisation.

However, the Bill was not passed in Rajya Sabha and has been stalled. In order for the Bill to be revived, and for it to progress, it will have to be introduced afresh on a future date after the 17th Lok Sabha assembles following the ongoing Lok Sabha elections.

The National Register of Citizens (NRC) in Assam is a document meant to contain the names of all “genuine citizens” of the state of Assam. It again has been an extremely controversial matter, with many saying they have been unfairly left out of the citizenship lists — while the BJP has touted the move as strong action against “infiltrators”.

The BJP president’s quote comes in line with the party’s manifesto that proposes to “implement the NRC in a phased manner in other parts of the country”.

The problem lies in the danger of the exclusionary politics practised under the garb of such Bills and Registers.

While some may claim that this would check “illegal immigration”, there have been protests alongside by ethnic Assamese groups that say the burden of illegal migrants will be passed onto the state alone as a result of the Bill.

Furthermore, the Bill has drawn flak for excluding Muslims.

As the Lok Sabha elections saw the first phase of polling this week, the voters must think through carefully before casting their vote now on whether they would want to have a government practising such exclusionary politics.