Who took your jobs away? The data doesn't lie

Why is the world's fastest-growing economy also suffering the fastest growth in joblessness? And how can the next government break through this vicious impasse?

Is unemployment an instant crisis?

A truckload of data and research showcase that India is perennially short of jobs against its burgeoning supply of labour force. So, how did unemployment explode in the last five years while other demographic indicators — such as population growth, migration et al — have not deviated from their past trajectory?

Why does the latest NSSO survey show a drop in the male workforce in 2017-18 from what we had, say, five years ago?

To find the answers, we need to distract ourselves from the government’s apparent data denials and political rhetoric to digest the bizarre fact that world's fastest growing economy is now breeding the fastest unemployment growth in recent history.

Over the last five years, India has witnessed unprecedented job destruction due to a variety of complex factors amid a perpetual paucity of employment opportunities.

Devil's in the data

Where is the official job data, you ask? It is unrealistic to expect joblessness data from the government as it seemingly lacks credible numbers even on job creation — consequently, delay in reporting job data and  the denial of the ‘leaked’ data turned an obvious choice for the Modi government's mandarins. Where are we heading? Data shows unemployment growth hit a 45-year high of 6.1% in 2017-18. (Representational image: Reuters)

Even rural wages being at a five-year low contradicts the high growth story. Statistics indicate that the unemployment rate could anywhere be between 15% and 20% because on average, 40% employees in India have salaries as low as Rs 10000-11000 per month.

'Hows' and 'whys' of job destruction

Post-economic liberalisation, this is probably the first five-year stint of a government when India has witnessed such a large scale of job cuts both in the organised and unorganised sectors, owing to various structural and disruptive factors.

In the organised sector, a host of large companies cut jobs due to a slump in demand in domestic markets, a pile of debts, takeovers and protectionist policies of major global economies.

In fact, the biggest job creators from the organised sector of the last decade — i.e., computers and banking services, telecom, e-commerce and retail construction — have gone through a slowdown and seen job cuts at various levels.

The unorganised sector — which gives 85% employment in India — went through its first-ever mass attrition post-demonetisation and the implementation of GST. 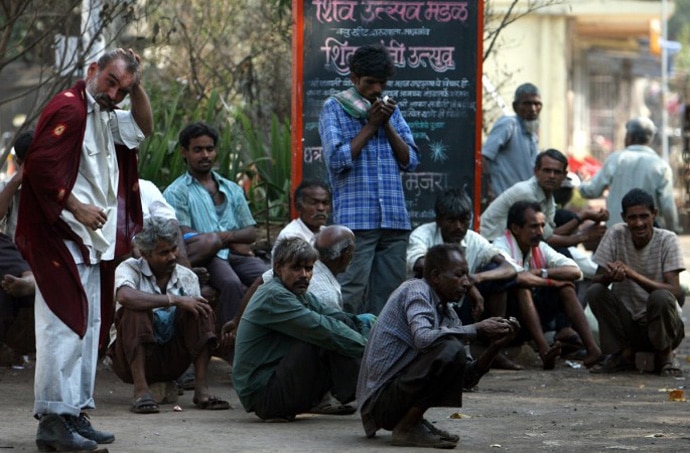 Nowhere to go? The unorganised sector went through its first mass attrition after demonetisation and the GST. (Representational image: Reuters)

How did demonetisation and a faulty GST turn a prime job creator into a prime job demolisher? Here are a few facts:

As most of the enterprises in India are small and medium and operate under a low capital business model, the sudden discontinuation of 95% of cash, followed by the imposition of GST, had directly hit their existence — leading to massive job cuts that reflects in NSSO and CMIE numbers.

Going beyond the electoral narrative of unemployment, India's broken job machine — amid high growth — may turn into a bigger economic problem. As economies (domestic and global) are heading for another slowdown, the job crisis may deepen further in the next few years.

Cross-country evidence suggests nations that manage to grow their savings pool are perpetually the ones that have the ability to create jobs along with economic growth.

India’s household savings ratio had already touched a 20-year low of 16% in FY17 — this number could drop further if the country’s high GDP growth is not accompanied by job creation and real wage growth in the coming months.

Whomsoever India may vote in, the next government will have to adopt tough reforms to get the job machine roaring again in order to prevent a vicious cycle of low consumption-growth — and social instability.

#Lok Sabha elections 2019, #Cmie, #Unemployment in India, #Nsso survey
The views and opinions expressed in this article are those of the authors and do not necessarily reflect the official policy or position of DailyO.in or the India Today Group. The writers are solely responsible for any claims arising out of the contents of this article.