Not In My Name: Protests an attempt to speak to the conscience of the nation

Why and how did it reach to this point where I had to protest against lynchings in 2017?

A huge map of India blotted with red dots. "Lynchings since 2015", it read. The last time I checked we were still in India, right? This Democratic Republic that promises Justice, Liberty, Equality to all?

Then why did I have to drag myself out of my house, out here on this particularly humid evening, in a mosh pit at Jantar Mantar, proudly holding a placard quoting Faiz Ahmad Faiz -"Kitnon ka lahu chaheeye aye Arz-e-Watan (Motherland, how many of your sons will be sacrificed)".

Why and how did it reach to this point where I had to protest against lynchings in 2017?

Reports after reports in the news over the past two months have talked about lynchings across the country. I have read articles on the psyche of mob violence, international media turning Hindustan into "Lynchistan", WhatsApp videos showing the brazen way life is snuffed out of a person and the apathy of the bystanders. This seems to be surreal and sounds like a part of Margaret Atwood's dystopian novel, The Handmaid's Tale, where the government where the government legitimises lynching and stoning as punishment. But that's fiction, not reality, right?

With the state acting as a mere spectator in such instances, one can't help but feel that there seems to be something engineered about these acts. I know what people might say, the cynic liberal is out for the government's throat again. Academic Pratap Bhanu Mehta calls these lynchings "a protracted riot in slow motion". Are we living through this riot oblivious, waiting for another lynching, another Akhlaq, another Pehlu, another Hafiz Junaid to be murdered in the name of beef? 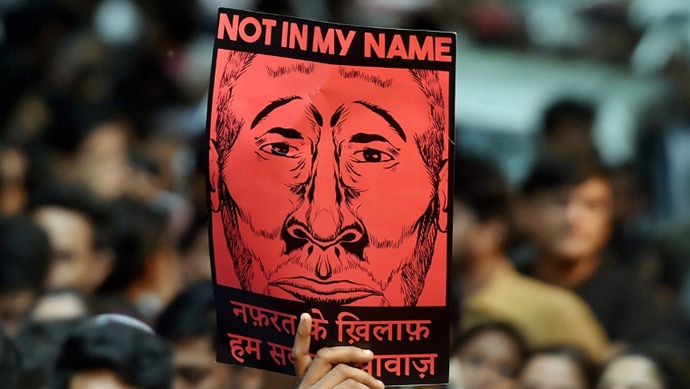 The hatred that killed Hafiz Junaid in that rail coach he was travelling in, manifests itself in so many different forms around me. My timeline is flooded with words that describe me as a roach, satan and much ruder, cu**.

I came out today because I am done squabbling on social media — staying silent as venom brews may as well make me a collaborator as we watch fascism mixing with barbarianism. There were songs of revolution, signs that preached Bob Marley, cheeky placards of Donald Trump and PM Modi hugging it out and promising world peace, today there wasn't anger, and loud and noisy sloganeering, but an optimism that was somehow hidden all this while behind morbid news.

I saw four-year-olds perched on the shoulders of their fathers raising their power fists, old women who could barely walk, marching towards the stage, the Delhi posh totties in their pristine whites, making their way into the crowd undeterred by mud, rain or sweat. Like student activist Sabika Abbas Naqvi said in her impassioned poem on stage, "Come in anger, Come in joy", we were there and we have had enough.

In To Kill A Mockingbird, Atticus Finch says, "The one thing that doesn’t abide by majority rule is a person’s conscience."

I, like thousands of others today, hoped not to be a part of another protest, but to speak to the conscience of the nation.

Also read - Not In My Name: We can't stand in silence and let them lynch and rape

#Politics, #Beef, #Hafiz Junaid, #Protest
The views and opinions expressed in this article are those of the authors and do not necessarily reflect the official policy or position of DailyO.in or the India Today Group. The writers are solely responsible for any claims arising out of the contents of this article.