How Gandhi became the most incredible brand of India

Nobel laureate Rabindranath Tagore had bestowed the name 'Mahatma' on Gandhi as early as 1915. However, Gandhi became a universally-accepted Mahatma only after his death.

Gandhi was assassinated seventy-three years ago, on January 30, 1948. The Indian police charged a “gang” of 11 people identified as patriotic Hindus. In 1949, eight of them were convicted by a special court in Delhi.

After the assassination, a smiling Gandhi moved to the decrepit walls of India's local, state, and federal government offices. After the assassination, a smiling Gandhi moved to the decrepit walls of India's local, state, and federal government offices. (Sketch: Pranav Lenin)

The relegation of Gandhi from Indian politics to the walls of government offices was quick. The Bombay Government Resolution (GR) of June 1949 instigated the process as the "photographs of her majesty, the Queen was carried unostentatiously to a remote place, and the frames and glasses were removed. The frames and glasses which remained intact, neat and tidy were used for framing Mahatma Gandhi's photographs."

The smiling Gandhi was welcomed into the vast and diverse country's remote villages with some 26 languages and all the world's major religions. The non-native languages of India include English, French, Portuguese and Mandarin.

India addressed Gandhi as “the Mahatma” or the great soul. Nobel laureate Rabindranath Tagore had bestowed the name Mahatma on Gandhi as early as 1915. However, Gandhi became a universally-accepted Mahatma after his death.

The Mahatma quickly moved to occupy a special place on the walls and puja rooms of Indian households. His position became remarkably close to the Gods and demigods of India.

As Dr Mukund Rajan wrote, Gandhi became the most incredible brand of India. It became embedded in the world psyche as a symbol of nonviolence and suffering in pursuit of truth. In the dark days of British rule in India, the world watched Gandhi’s actions in awe. This included the spectacular brand marketing-type theatre of producing salt from seawater without paying taxes. He scripted the salt-making episode as part of his nonviolent struggle for independence from Britain. Gandhi re-imagined the idea of a unique Hindu India. His Hinduism view entails the relentless pursuit of truth as God.

In the aftermath of the Second World War, the brand delivered unprecedented rewards to India.

India became the refuge of the Buddhist state of Tibet in exile and His Holiness the Dalai Lama. The Beatles came to India in search of the Hindu way of life. Soon India became the world's biggest destination for spiritual tourism.

In 1997, the brand struck gold. Apple Inc, now the world's most valuable company with a market capitalisation of around $2 trillion, had embarked on a remarkable turnaround journey in corporate history. So, they turned to the Mahatma. As Prof Amitava Kumar narrated in Bombay London New York, the Mahatma modelled for Apple with a simple caption — “Think Different”. The half-naked Mahatma spoke silently from the giant billboards in London, New York, Paris, and Sydney. The brand stood tall among all other Indian brands that burst on the global stage through Bollywood and cricket. 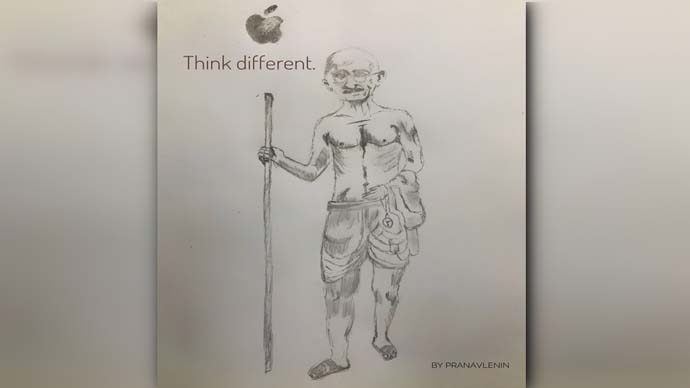 The resurrection of Gandhi as Mahatma through the puja rooms and billboards of the world’s major cities was not in the gang's murder script. The gang’s express objective was to build a different “Hindu nation” by eliminating the person “who brought ruin and destruction to millions” of Hindus.

Gandhi said India lived in her villages. The Mahatma, rising from the dead, powered through the global village. He sabotaged the gang’s objective of building the so-called Hindu nation.

While researching Gandhi’s story, a senior advisor with a management consulting firm chided me. He asked me to read the “unwritten” history of the Indian independence struggle. He directed me to the heroic acts of one of the accused in the Gandhi murder case. Gandhi’s teachings gave me solace as I sought to remove my ignorance of unwritten history. With quotes from Bhagavad Gita, Gandhi had opined that the experience of ignorance would propel human beings to knowledge and truth.

There is a large industry thriving on the research and storytelling of Mahatma Gandhi. The 1982-film Gandhi won eight academy awards including the best picture, best director and the best actor awards. The film became the 12th highest-grossing film that year. Recent books and biographies include one written by the brother of Gandhi’s killer, who narrated the reasons for killing Gandhi. Several researchers discovered an un-Hindu Gandhi, who tested the power of practising celibacy while sleeping with women as part of his experiments with truth. Research on Gandhi’s “love letters’” to his German male friend raised questions on his sexuality based on conventional norms of Indian moral codes. In his autobiography The Story of My Experiments with Truth, Gandhi laid out his life failures as a son, husband, lover, father and political leader.

Against the snarl of challenges faced by the Mahatma, the world seems to be relieved to know that Gandhi was indeed human.

In 2017, the Trump administration of America ushered in alternate facts and post-truths in our collective lexicon. Since then, there were several attempts to rewrite history using alternate facts. This includes the efforts to rediscover a new Gandhi and continue the assassination of the Mahatma’s ideals. Will the very idea of India envisioned by the Mahatma survive the alternate-fact assault?

Also Read: Like Savarkar to Godse, how Indian right-wing is killing Gandhi all over again

#Donald Trump, #Gandhi's assassination, #Mahatma Gandhi, #Martyrsday
The views and opinions expressed in this article are those of the authors and do not necessarily reflect the official policy or position of DailyO.in or the India Today Group. The writers are solely responsible for any claims arising out of the contents of this article.