Rahul Gandhi vs RSS: Who killed my Father, the nation wants to know

Since when is questioning the Sangh for its role in Bapu's killing a private matter?

The assassination of Mahatma Gandhi - "Bapu" or "Father of the Nation" as school textbooks exhort its young readers to remember the legendary freedom fighter - barely months after India's independence, was a telling statement on a newborn nation.

Preceded by the killing, rape and displacement of millions of Hindus, Muslims, and Sikhs during a bloody Partition of the subcontinent - arguably the most undocumented genocide in history - the two incidents continue to influence the collective imagination of India as a state.

Gandhi was gunned down by Nathuram Vinayak Godse on a chilly January evening in 1948 when he was on his way for a prayer meeting at his then abode, Delhi's Birla House.

He is believed to have uttered "Hey Ram" twice as his frail body hit the ground, stunning a nation into shock and silence.

While eight men were convicted for the killing, Godse and co-conspirator Narayan Apte were hanged to death on November 15, 1949.

Jawaharlal Nehru - for whom Gandhi's killing had snuffed "the light out of our lives" - banned the Rashtriya Swayamsevak Sangh (RSS), whose hand, along with the Hindu Mahasabha, was seen behind the assassination.

The ban on the RSS was lifted a year later, thanks to Sardar Patel who had warned the Congress against efforts "to crush the patriotic" RSS.

The stamp of patriotism, bestowed by no less than India's first home minister, and more ironically, a close associate of Gandhi, blurred the questions over the involvement of the RSS and other Hindu Right-wing groups in the conspiracy behind Gandhi's assassination.

Also, what remained largely unanswered, and still remains crucial, is a related question: why was Gandhi killed at all? The simplistic explanation of Gandhi's pandering to Muslims, which led to the formation of Pakistan, is never enough. 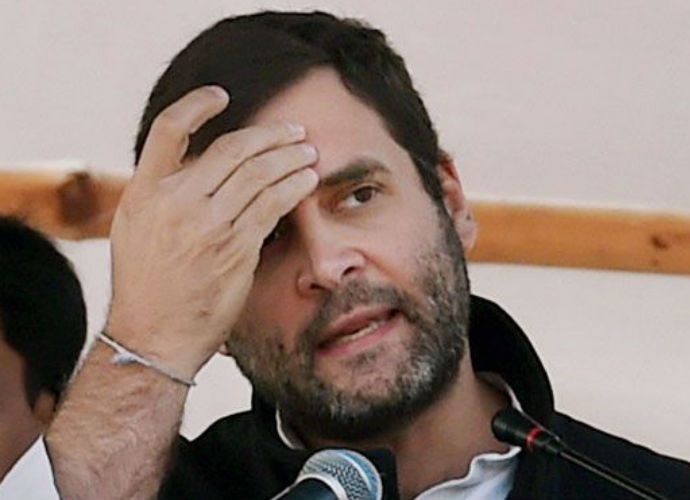 The Supreme Court is now trying Rahul Gandhi for defamation on his "The RSS killed Gandhi" remark.

Decades later, and not for the first time, Congress leader Rahul Gandhi repeated the allegations against the RSS at an election rally. "The RSS killed Gandhi," he said, inviting wrath not only from the RSS and the BJP, but also the Supreme Court, which is now trying him for defamation.

As it upheld the case against the Congress vice-president and accused him of "collective denunciation of the RSS", the Supreme Court also made a curious observation: "History is the biggest enemy of privacy". It was an interesting take on privacy, which remains the classic liberal dream.

But will a desire for privacy reduce history to a mere archive? Since when is questioning the RSS for its role in Gandhi's killing a private matter?

What legal rights have we accorded to "Father of the Nation", whose birthday is a national holiday and whose death the only occasion when the entire nation observes a two-minute silence?

Also read - Was Nathuram Godse the only killer of Mahatma Gandhi?

For a politician like Rahul Gandhi, isn't Mahatma Gandhi's killing always relevant as a political talking point? Why should the Court ask him to apologise for raking it?

Have we reached a closure on Gandhi's killing? Or, are we doomed to be a nation where any closure in cases of political violence will forever remain a collective desire?

For Rahul, the context behind raking up Gandhi's assassination must have come easy. The RSS today wields unprecedented political power.

It takes a call on prime ministerial candidates, and when they win, it decides who the prime minister can hire as his ministers and other functionaries.

Its members have penetrated most organs and institutions of this democracy, holding the establishment of a theocratic Hindu state as their only brief.

The RSS has even ensured the government is accountable to it and often summons its functionaries for their appraisal, a dangerous first in the current dispensation.

And a far cry from the cultural organisation it claims to be with no political interest.

As Hindutva gains its biggest access to India as a state, threatening to "course-correct 800 years of India's civilisation deviation", to ask who killed Gandhi and why is to reclaim the slowly-eroding ideals of a secular democracy.

Gandhi, for all his flaws, may not have been the best apostle of secularism the present generation has inherited, but it remains surprising that a nation that owes its independence to perhaps the largest and the longest non-violent movement ever seen remains reluctant to introspect on why was the leader of that movement was killed in the first place.

It is well documented that Godse was an active member of the RSS and the Hindu Mahasabha and ran a newspaper called Hindu Rashtra, now the Sangh Parivar's mission statement.

Gandhi, therefore, was killed because he came in the way of that idea. The people holding those ideas are in power today, garlanding Gandhi's statues abroad and planning Godse temples back home.

To ask who killed Gandhi, in such dysfunctional times of deceit, is not about politics, but perhaps the most patriotic act. Patriotism that India must reclaim from the RSS. Now.

#RSS, #Rahul Gandhi, #Nathuram Godse, #Mahatma Gandhi
The views and opinions expressed in this article are those of the authors and do not necessarily reflect the official policy or position of DailyO.in or the India Today Group. The writers are solely responsible for any claims arising out of the contents of this article.