This makes a mockery of the promise of equality that has been enshrined in our Constitution.

BJP motormouths can be trusted to make a bad situation worse with their ill thought-out statements. Living upto this trust, culture minister Mahesh Sharma waded into the simmering diplomatic row over the killing of an African national in Delhi's Hauz Khas.

He played down the discontent among the African community by stating that "even Africa is not safe".

This attempted defence is objectionable at various levels.

It blurs the difference between stray assault and a crime related to discrimination. 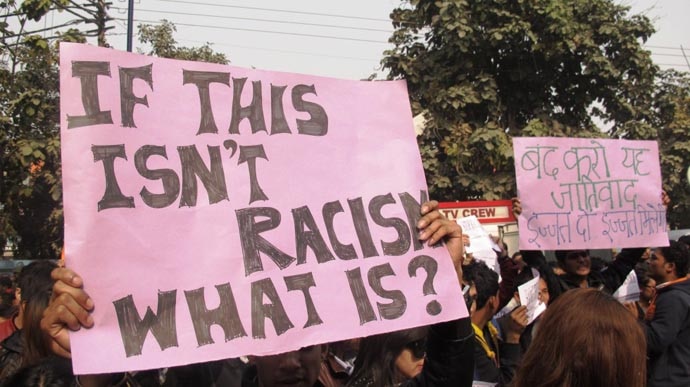 What kind of an impression will such an intemperate statement create for India across the globe?

The minister fails to understand that while all crime is abominable, incidents arising due to a bias against a particular class of people are more revolting. The Africans could have been questioned if their outrage was over a routine incident despite the best efforts of Indian state, but the anger here is not so much due to the state's inability to control crime as the routine victmisation of Africans due to deep-rooted racial prejudice in Indians.

The situation is made worse by an Indian state that is indifferent to the plight of Africans. Imagine how the police would have sprung to action if the victim was an American or any light-skinned foreign national (and the foreigner would not have been a victim of such prejudice in the first place).

Africa may be unable to protect crime, but the effect of failure is not borne inordinately by a particular identity group. In our case, Africans are being singled out as targets and are oppressed with utter impunity, with connivance of the larger society and the state.

The anger is over the racial discrimination that most Indians subject Africans to. The Africans in India for long have been a minority that has silently suffered such prejudice. This smashes their sense of dignity and makes a mockery of the promise of equality that has been enshrined in our Constitution.

Also, given how sensitive we our to racial prejudice when we are at the receiving end, doesn't the minister's statement - making light of the Africans' outrage - paint Indians as hypocrites with double standards? The world will now realise that the principles of racial equality and non-discrimination are convenient tools used by Indians when they suit us and ignored when they don't.

The ugly truth is, even when we suffer from racism ourselves, we are guided by it. We remain slaves of the racial attitude and our shameful treatment of Africans is its most obvious indicator.

Following the example of Sharma, developed nations' governments too can ask India to shut up in case of racial crimes against Indian expats because racial crime is much more in India and their citizens are often survivors of such crimes.

Is the minister trying to suggest that if such crimes are prevalent in Africa, the nationals from the continent should silently suffer crime elsewhere? The statement may be used by our detractors as implying tit for tat. It may be suggest that since Africa is unable to protect Indians, it shouldn't expect India to protect its citizens.

What kind of an impression will such an intemperate statement create for India across the globe?

A new standard for failure

The minister, by justifying our failure using Africa as an example, brackets India with Africa. Should an aspiring superpower be dwelling on equating itself with a region that has one of the worst crime rate statistics in the world?

What a mighty and sad fall it has been for the Modi government, which has ended up comparing itself to the standards of Africa after promising to match those of USA and China.

The statement undermines the effort of the external affairs ministry to control the damage and adds insult to injury.

It ensures that the unpleasant controversy lingers when it could have been put to rest with corrective action. Perhaps, this is the right time for Modi to do some hard talk with Mahesh Sharma and ensure that India doesn't have to continue putting up with the regular embarrassment the minister causes our country.

Post your comment
#Racism, #Congolese Attacked, #Mahesh Sharma
The views and opinions expressed in this article are those of the authors and do not necessarily reflect the official policy or position of DailyO.in or the India Today Group. The writers are solely responsible for any claims arising out of the contents of this article.