Why Maldives crisis has landed India in a soup

India faces a most difficult dilemma in dealing with the current developments in the Maldives. No easy course of action is available to stop the murder of democracy in the island nation without compromising many principles that we uphold in the conduct of international relations.

We believe in respecting the sovereignty of states and non-interference in the internal affairs of countries. However repugnant to democratic norms may be President Abdulla Yameen’s conduct, it remains the Maldives’ internal matter and direct foreign intervention would violate international law. While India is wedded to democracy, it does not believe in imposing it on others.

Consequently, any intervention by India to counter Yameen’s autocratic suppression of democracy at home would be contrary to its own beliefs. Our intervention in the Maldives in 1988 and in Sri Lanka in 1987 was at the request of and in agreement with the legitimate governments of these two countries. We have received no request for intervention from the Maldivian government.

The former Maldivian President has no doubt sought it, but however worthy his appeal it lacks legitimacy in international law as a basis for intervention. Moreover, he is not in control of any territory in the Maldives and his appeal has not been made from Maldivian soil together with a group of significant politicians.

If a civil war situation was developing with a real danger of loss of lives and timely intervention is needed, India as the closest neighbour with the capacity to act could intercede, but this is not the situation at present. Yameen has bludgeoned the Supreme Court into submission and is in control of the military. There is no street resistance to his high-handed conduct. India could interfere to evacuate Indian nationals if their lives were under threat but this contingency has not been reached yet.

Yameen’s deplorable conduct certainly has internal consequences for the people of the Maldives but does not for the moment threaten peace and security, which if it did would have given the UN Security Council a basis to intervene. In case it appeared that the deteriorating internal political situation within the country was of a magnitude that if ignored could lead to external intervention of some kind by one country and a countervailing response by another, and, therefore, to prevent a potential conflict some step by the UN would be opportune, ideas like a UN fact-finding mission to assess the situation could be proposed.

But for this to materialise there has to be a consensus in the UN Security Council. China’s consent would be required, but one cannot see it agreeing to such an initiative. It has already advised against any external interference, arguing that the situation should be left to be handled internally by the Maldivians themselves and that the security of its projects and personnel can be assured by the authorities. It knows that the ouster of the Yameen government and the return of Mohamed Nasheed to power would not be in its interest, and therefore would resist a step that would weaken the current dispensation in Male. 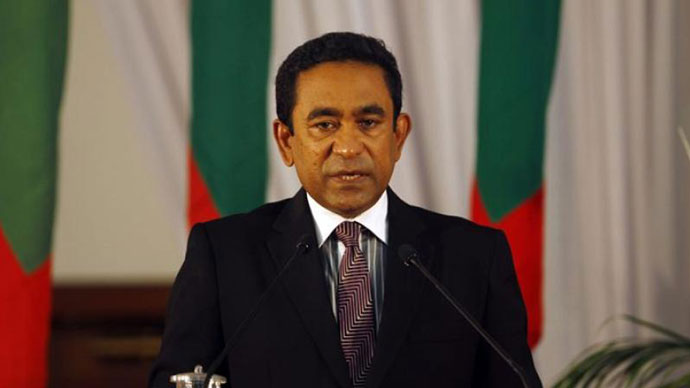 Unfortunately, regional options to deal with untoward developments that violate certain political standards that regional countries would like to uphold are not available either. The African Union, for instance, does not recognise the legitimacy of military coups in an African state and takes an adverse position as it has done in the most recent case of Zimbabwe.

Even if the actual effectiveness of such non-acceptance is doubtful, there is a consensus within the organisation on unacceptable forms of internal political developments in African countries. In our case, a regional effort of sorts under the umbrella of SAARC to put political and moral pressure on the Maldives is out of the question given the political bankruptcy of SAARC. Not surprisingly, Yameen has reached out to Pakistan whose own rogue conduct makes it a plausible interlocutor.

China has a vital geopolitical interest in the Maldives as part of its Indian Ocean strategy represented by its Maritime Silk Road project which the Yameen government has supported. Under Yameen legislation has been passed to transfer land on long-term lease to foreign enterprises to facilitate China’s strategy. A Free Trade Agreement with China has been signed in all haste without discussion in the Maldivian parliament. Some key infrastructure projects have been awarded to China. All of this has been done in total disregard of India’s interests and concerns, including security ones.

Yameen has been impervious to Indian diplomacy. His foreign minister’s visit to India in January was unsatisfactory. He believes he can continue to play the China card against us. China says that it wishes to avoid another flashpoint with India (after Doklam) which suggests that it sees a conflict of interest between it and India in the Maldives, similar to the one in Bhutan. But China does not claim sovereignty over the Maldives and no border dispute with India is involved. China is implicitly denying India right to intervene in the Maldives and threatening to oppose it. The nuance of the Chinese position is unacceptable.

Yameen is overplaying his hand and endangering India’s security. If understandings between the US, Japan, India and Australia on the Indo-Pacific and mounting European concerns about China’s geopolitical ambitions are to be translated into concerted action in the region, the situation in the Maldives provides an opportunity to do so. Political and economic sanctions against the Yameen government should be the first step.

#OBOR, #Diplomacy, #China, #Abdulla yameen
The views and opinions expressed in this article are those of the authors and do not necessarily reflect the official policy or position of DailyO.in or the India Today Group. The writers are solely responsible for any claims arising out of the contents of this article.