PM Modi must not mishandle Maldives

New Delhi must ensure its influence in Male is not taken away by Beijing.

After the political turbulence that unfolded in Maldives subsequent to the Supreme Court's order to free Opposition leaders, including former president Mohamed Nasheed, India seems to be in a peculiar dilemma over whether it should respond to Nasheed's call for help and if so the manner and extent to which it should engage in the internal affairs of another sovereign state. 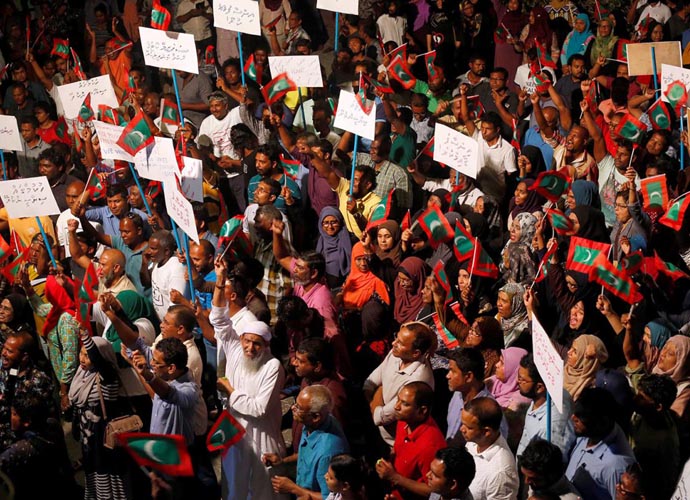 India has always been a "friend in need" for Maldives. Indian Army's "Operation Cactus" foiled a coup in Maldives that was attempted by a pro-Eelam group in 1988. On the request of Maldives, India has maintained a naval presence there since 2009. The island country is again looking towards India and this is an opportunity for New Delhi to redefine regional cooperation in South Asia. China's proximity to Maldives has always been a concern for us. Already it is engaged in infrastructure and development projects in Maldives. Therefore, it is natural for China to suggest India to stay away from the political developments in Maldives. But keeping in view the geopolitics of South Asia, India should take a decisive stand not only in the interest of the people of Maldives but in its own interests as well.

Seeing from the international law point of view, non interference in the internal affairs of sovereign states is one of the fundamental principles of the charter of the United Nations and India, since Independence, is committed to this charter. The charter states that no state or group of states has the right to intervene, directly or indirectly, for any reason whatsoever, in the internal or external affairs of any other state.

Consequently, armed intervention and all other forms of interference or attempted threats against the personality of the state or against its political, economic and cultural elements, are a violation of international law.

However, as it has been interpreted in international law, Article 2.4 of the UN Charter which is the crux of non interference in the internal affairs of sovereign states, action in self defence, including the rescue of nationals where the territorial state is unable or unwilling to do so, does not infringe the principle of non interference. Since the rule of law and people's rights are under threat, India's engagement with Maldives, in this hour of crisis, will not contravene the UN Charter.

The international community is aware of India's position that non interference with a preference for peaceful conflict resolution mechanisms both at the regional and global levels has been one of the guiding principles of New Delhi's foreign policy since Independence.

Article 51 of the Constitution states that India shall endeavour to promote international peace and security; maintain just and honourable relations between nations; foster respect for international law and treaty obligations in the dealings of organised peoples with one another; and encourage settlement of international disputes by arbitration. India's approach towards other sovereign states is to respect their territorial integrity and sovereignty and at the same time address humanitarian concerns and to provide assistance through positive intervention with the objective of development of the nation-state. With this approach, India has been involved in various humanitarian, developmental and national reconstruction programmes in various countries, particularly the developing countries. India has never attempted to impose itself on its neighbours. At the same time, we should express our concern over the activities aimed at fomenting domestic disturbances in and by our neighbourhood countries.

India's role is also crucial to ensure and maintain long-term peace, balance of power, economic growth and security in Asia. It is a core state whose role is crucial for the economic well-being, institution building, collective and cooperative security, economic integration and trade expansion and political and civilisational dialogue, essential for a resurgent Asia. The present political leadership should strategise and act from this perspective. New Delhi must take the leadership and make a strong diplomatic effort to counter the economic and political diplomacy of China.

We paused but China acted in Nepal. Despite the economic geography of Indo-Nepal relations that tilts in favour of India, we failed to prevent China-Nepal political symmetry. The new Nepali leadership's close proximity to China is a worrying signal for India. China has already given Nepal access to its ports and talks are on for a joint rail link construction. The February visit of Sushma Swaraj to Kathmandu, though it was before formation of the new government, was a delayed engagement from the Indian side. The possibility of Nepal moving closer to China and its consequences for India must have been anticipated much earlier and acted with alacrity.

If Modi government is really serious about balancing India's position in the south Asian region vi-a-vis an aggressive China, it should not remain silent on the Maldives crisis and allow the situation to go out of hand as it happened in case of Nepal.

Also read: The failure, and hope, of Muslim politics in India

#South Asia, #Chinese aggression, #India-China Relations, #Maldives crisis
The views and opinions expressed in this article are those of the authors and do not necessarily reflect the official policy or position of DailyO.in or the India Today Group. The writers are solely responsible for any claims arising out of the contents of this article.