Mamata Banerjee's Didigiri: The journey from slaying the red dragon in Bengal to taking the PM head-on

Didi refuses to crumple before a challenge. On the contrary, she is ready to take on anyone who comes in her way. So is she on the her way to becoming India's first Bengali PM?

Such is the grandeur of Didi.

In 1997, Banerjee left the Congress Party in West Bengal and established the All India Trinamool Congress.

Do not let her appearance deceive you though. Donning hawai chappals and Dhanekhali sarees, Didi is not just a street fighter but also a shrewd strategist. Her impromptu sarcasm has often hit her opponents hard. 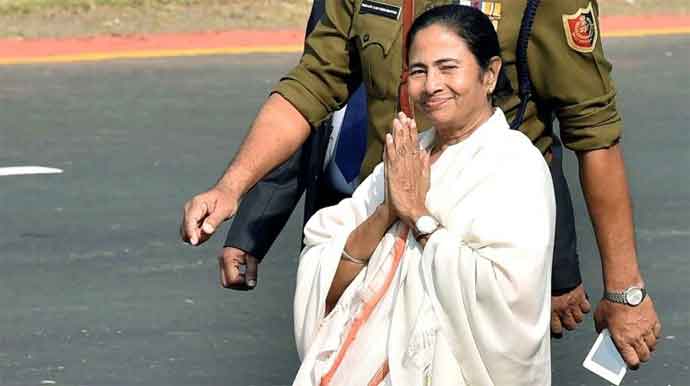 Mamata Banerjee is not just a 'street fighter' but also a shrewd strategist. (Photo: PTI)

But there is a soft side to Didi too. She loves the poetry of Rabindranath Tagore and Kazi Nazrul Islam, who was a revolutionary poet. And Didi is no less — her poetry and paintings will often leave you speechless. She even bombed the Modi government with her poems.

Do you listen to Mann ki Baat?

Do you write against the ruler?

Does your phone have Aadhaar?

Are you a member of the Pay-B-Team?

Have you registered all documents?

Are you against the oppressor?

Then there's no place for you

Then you are an extremist.

She is known to be pro-farmer, pro-poor and her popularity amongst the Muslim population are her strengths. But the Saradha scam, Narada sting operation, violence in Malda and Tata Motors Singur battle have often pulled her down. Once an ally of the NDA, she now stands at loggerheads with none other than the Prime Minister himself. Fellow women politicians have shown great strength in the past. Be it the late J Jayalalithaa, Sonia Gandhi or Mayawati, none stepped back from a confrontation. But Mamata's face-off with the CBI — and thereby, the power of Delhi itself — is one step ahead.

In the past too, she has been firm on her decisions to not allow BJP rallies in West Bengal.

Be it BJP President Amit Shah or Uttar Pradesh CM Yogi Adityanath, Didi simply nixed all permissions even given. On Sunday night, CBI officials, who had come to Kolkata Police Commissioner Rajeev Kumar's house to interrogate him over a chit fund scam, were detained by the Kolkata Police. West Bengal Chief Minister Mamata Banerjee then attacked the Modi government — and sat on a now-famous dharna. Her complaint — the BJP was trying to disrupt the harmony of Bengal.

She said that it was her responsibility to protect the forces in her state, and thus support poured in from the Mahagathbandhan leaders. The drama kept unfolding — but Didi is stubborn and refused to budge. Even after the Supreme Court's verdict that finally said the Kolkata top cop has to join the CBI probe over the Saradha scam, her face-saver was that the cop wasn't arrested and the verdict is a moral victory for the Bengal government.

Didi refuses to fade away and is ready to take on anyone who comes in her way.

So, is she the new PM face? Is the cry for a Bengali PM suddenly filling the air? But how will she control her own supporters — and how will she also clear the air which is as full of charges of supporting graft, as they are full of admiring chants? There is some time to go before we get the answers to these questions.

But this much is certain — with Didi, the times ahead too will not be dull.

#2019 Lok Sabha elections, #Mamata vs cbi, #West Bengal, #Mamata Banerjee
The views and opinions expressed in this article are those of the authors and do not necessarily reflect the official policy or position of DailyO.in or the India Today Group. The writers are solely responsible for any claims arising out of the contents of this article.