The West Bengal CM had whipped up an anti-Modi campaign all over the Hindi heartland.

For over a fortnight she had been anxious about the Uttar Pradesh results, even though her party was not contesting a single seat. Not quite convinced with her personal assessment, she broke the question quite frequently in close circles of journalists, trying to gauge the prediction of political pundits.

On the day of the result on March 11, she was in front of the TV from early morning. As the saffron surge faded all political colours, Mamata grew impatient between channel surfing.

She was gripped with a deep feeling of loss, a defeat no less personal than that of Samajwadi Party chief Akhilesh Yadav and Congress leader Rahul Gandh. Mamata, unlike Akhilesh and Rahul, was not sweating it out in the rough and tumble of politics in the Hindi heartland.

She was into a different ball game, engaged in a fierce obsession of settling her personal scores with the person on the topmost chair, who had dared to raise questions about her honesty and integrity and had come across as the major impediment to her national aspirations.

Hence her arch enemy’s huge victory, though against another contender, amounted to a huge personal defeat. Around evening she tweeted — “Congratulations to winners in different states. Congratulations to the voters for making their choice. To the losers don’t lose heart. In a democracy we must respect each other because some will win, some will lose. Trust the people.” 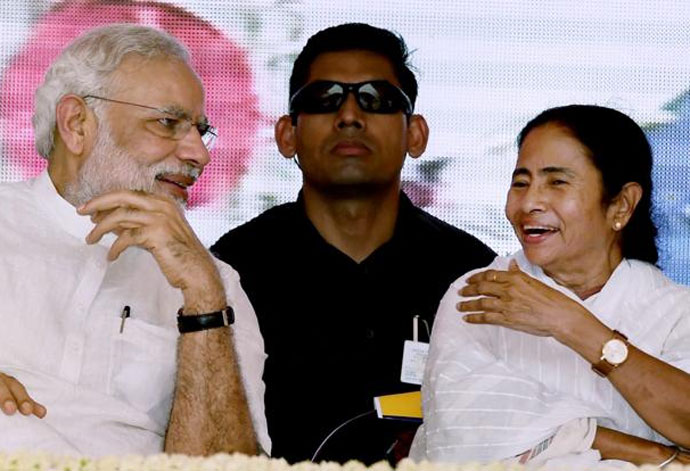 Modi in the past had given a long rope to Mamata to win her favours in the passage of crucial bills in the Rajya Sabha.

By sending a general congratulatory message to all the winners, including the saffron brigade in UP, Mamata made the first baby step towards rapprochement. And the Trinamool Congress leaders heaved a sigh of relief, especially the ones accused in the Saradha and Rose Valley financial scams.

At least half a dozen cabinet ministers and MPs and MLAs were mentally prepared to be called by the CBI with the Mamata-Modi war of words over demonetisation and CBI’s arrest of two Trinamool Congress MPs reaching a crescendo.

With the UP election, thrown in between, all eyes were on the results. A clean sweep of the BJP would mean more party MPs in the Rajya Sabha and less dependence on Mamata and other regional players to make up for the shortfall in the Upper House.

Modi in the past had given a long rope to Mamata to win her favours in the passage of crucial bills in the Rajya Sabha. Now with the political compulsion having ceased to exist, he can let her hang mid-air. So was the apprehension.

“Mamata doesn’t believe in half-measures. Whatever she does, she does it with full gusto and with all her might,” said a Cabinet minister. In her battle against Modi too, she had gone for a head-on collision without leaving any escape route.

She had not only criticised Modi, called him names — Tughluq, Gabbar Singh, Daaku, she had whipped up an anti-Modi campaign all over the Hindi heartland by trying to unite all the regional players and parties in the Opposition.

Obviously she was aware of the pound of flesh she would have to pay, the casualties her party would suffer for starting a big fight with the now most politically powerful man in the country.

“But again, that is Mamata. She believes in a policy of no risk-no gain. She thought by opposing demonetisation she would gain political mileage among rural voters, but the huge mandate in favour of BJP in UP had proved otherwise,” said poll analyst Biswanath Chakrabarty.

It was indeed a mistake. “Poor people were in praise of demonetisation because they felt Modi’s move was aimed at harassing the rich and driving away black money, which only the rich possess,” Chakrabarty added.

Naturally Mamata was perturbed. “She looked shattered as if she had lost the UP election. She was trying to console herself by drawing a parallel with the 2004 Lok Sabha election, when she was reduced to a single MP, and her eventual bounce-back,” said a Trinamool Congress leader on conditions of anonymity.

However, political maturity could overpower her impulsiveness. The tweet apart, she had taken some confident strides by extending the hand of understanding by publicly saying — “We want the Centre-state relationship to thrive on understanding. Political parties may come and go, but the spirit of cooperative federalism should not be affected. Democracy demands there should be respect for all.”

She’s looking to mend the bridges, talking of “understanding” and “respect.” These are tall claims of commitment, one expects in a relationship not in politics.

And, Mamata, knowing it fully well, is mouthing big words to warm up to Modi.

But, only till then, she finds her equation with the BJP too close for political and electoral comfort.

#Mamata Banerjee, #UP Elections 2017, #Assembly elections Results 2017
The views and opinions expressed in this article are those of the authors and do not necessarily reflect the official policy or position of DailyO.in or the India Today Group. The writers are solely responsible for any claims arising out of the contents of this article.