When she asked for equal rights, people left her lonely and desolate.

Last year on March 14, a few Manipuri students from Delhi's Jawaharlal Nehru University had gone to meet Irom Sharmila Chanu on her birthday. When they gifted her a shawl and wished her, an overwhelmed Irom broke into tears.

That turned out to be her last birthday in the Jawaharlal Nehru Institute of Medical Sciences (JNIMS) at Porompat in Imphal East, where she lived as an undertrial prisoner during her 16-year-long hunger strike, which she ended last year in August.

This year though on her birthday, the civil rights activist, who turned 45 on Tuesday, was far away from her home — in Kerala. Following her defeat in the just-concluded Assembly elections in Manipur (where she got just 90 votes), Irom announced on the day the results were out that she has decided to quit politics and go to Kerala for meditation.

“I am here in Kerala, just for a break. I am very pleased with your warm greetings,” she was quoted as saying by an IANS report, after she reaching Kerala.

When Sharmila announced her decision to make a political debut against three-time Manipur chief minister Okram Ibobi Singh from Thoubal, almost everybody knew the outcome. But no one, including her, expected just 90 votes for the woman who spent a decade and half of her life on hunger strike. What perhaps hurt her more was that people chose NOTA over her. The fact that around 143 people chose NOTA,  the message for Irom was clear — her people had disowned her. 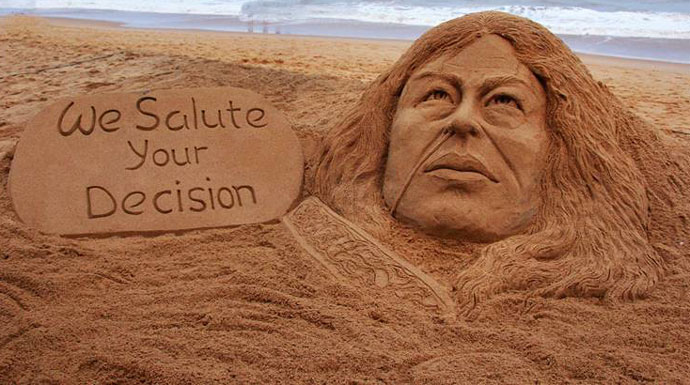 Perhaps even 16 years of isolation and hunger strike are not enough to seek people's mandate in a state which has been living in the constant shadow of fear and extra-judicial killings, corruption and incessant economic blockade for decades.

When the election results were out, the mainstream media went berserk. These were the people who perhaps still remembered her indomitable spirit, that face with the tube hanging down her nose for as long as they remembered.

People outside Northeast hardly know or recognise Ibobi Singh, but Irom has a "special" place in everybody's heart. In fact, in the run-up to the Assembly elections to the five states, every time Manipur was in news it was either because of the months-long economic blockade (amid which the polls were conducted) and negotiations involving it, or Irom. Many didn't know which party or how many seats her People’s Resurgence and Justice Alliance (PRJA) was contesting (three seats).

So when she lost, they lamented the death of democracy and blamed the cruel world of politics.

In cruel world of elections, 16 years of struggle and only 90 votes for Irom Sharmila

Was Irom Sharmila's 16 years of struggle worth 90 votes only?

When the same questions were raised on social media, rights activists from Manipur maintained that people still loved Irom, but politics needs a different mettle, time and strategy.

@BinaNepram But you have to accept that People of #Manipur betrayed her. She gave her life but in return she got just 90 votes.

What is truly shameful is not that #IromSharmila got only 90 votes,its that law like #AFSPA is clamped in NE India for 60 yrs @BeingAxomiya

They even argued, and rightly so to an extent, that there are other immediate concerns than just AFSPA in Manipur.

Sadly, Irom too seems scared to admit in public that her people have disowned her. In an interview to The Indian Express, she said, “I feel betrayed. But it is not the people’s fault. They are just innocent people... I don’t feel that I am defeated morally. People would’ve have voted for me, but their right to vote has been occupied by money...”

But it's not the dirty world of politics and elections alone which were responsible for Irom's defeat.

The truth is the moment she announced to break her fast, her people had abandoned her. Until August 9 last year, she was Manipur's symbol of self-sacrifice. However, the moment on July 26, 2016, Irom said she wanted to break her fast, she came under severe scrutiny. At that time, she had also expressed her desire to get married (to her long-time friend Goa-born British Desmond Coutinho) and announced that she would join electoral politics to continue the fight against AFSPA.

While many urged her to continue the fast, some radical groups even threatened her. Ironically, those very people for whom she stood up were ready to sacrifice her on the altar of tolerance.

"I am not happy to know that she has decided to end her fast. What upsets me more is that she did not consult me or her mother before taking this important decision. My mother always told her to fight till the end — till the demand to repeal AFSPA is met," her brother had told mediapersons last year.

Many even blamed “outsider” Coutinho for "influencing" her decision to end the fast. Some even expressed apprehensions that Coutinho is a state agent trying to divert her democratic struggle.

In fact, that was not the first time people tried to control Irom's life, her freedom or whatever little was left of it.

When the news of her "relationship" with Coutinho first appeared in national media in 2011, civil society bodies in Manipur termed it "an insult to all Manipuri people".

The Telegraph newspaper, in its September 5, 2011 edition, had quoted Irom as having said that "she was in love with Coutinho but her supporters were against the relationship".

Copies of the daily were burnt and the newspaper was banned in Manipur by civil society organisations under the aegis of Apunba Lup. They alleged that "there was a conspiracy by the national daily to sabotage the movement of Irom who is demanding the repeal of AFSPA".

But had it not been for her sacrifice, perhaps Manipur and the plight of its people would have never drawn national and international attention from various civil society groups. The same movement that they fiercely guarded against outsiders trying to sabotage it, was strangely no longer important as soon as Irom joined politics and started demanding equal rights.

It doesn't take long for any society and its people to expose their true colours — the mores and beliefs they stand for.

The day she broke her fast, her own people turned her away. Residents of a colony where she had gone to stay first said they didn’t want to call media attention and unnecessary trouble. From there, she was taken to a temple which too reportedly refused to take responsibility for her. It broke her heart to see how all those people who idolised her for years, chose to turn their backs on her.

Even during her election campaign she was mostly seen alone, except for a few friends. Her thinly attended election meetings at people's courtyards or at street corners bore the testimony of that deep-entrenched patriarchy which even those at the receiving end of it are not ready to admit. Irom had set out to change that and capture the social imagination, only to be found deserted.

On the other hand, Ibobi Singh’s Congress rallies, were a huge hit every time. That's because politically, women have never been considered of much consequence in Manipur. The otherwise brave women of Manipur, who guard their society from social evils, too have never demanded their rightful space in state politics, or expressed it openly.

In 2004, the women of Manipur made international headlines after staging a naked protest outraged over the rape and murder of a woman allegedly by Assam Rifles personnel. Yet they don't have any presence in the political arena.

This time around, there were only 10 women nominees among the 266 candidates contesting the elections. Apart from Irom, the PRJA has fielded Manipur's first Meitei Muslim candidate — Najima Bibi. The outgoing assembly had three women, including Ibobi Singh's wife. This, despite the fact that there are women voters than men in Manipur – 9,68,312 females against 9,25,431 males.

While very few women dare to speak against the patriarchal pressure, some do admit in private the perils of living in a society with very less support from families, including husbands and fathers.

In a society where men call the shots both at home and outside it (very much like the rest of India), the question of fighting elections doesn't arise.

Moreover, elections are more about money and power, and sadly women in Manipur, like everywhere else in India, lack both.

So when Irom tried to shatter those barriers and free herself and others like her, she has not just been abandoned by everyone, but even forced to seek solace outside her state.

During the run-up to elections, Irom often lamented to those handful of people who went to show their support to her. “During my hunger strike, they supported me but were just guarding me, controlling me, escorting me. They wanted to ensure my martyrdom."

The image of Irom in people’s minds, she was quoted as saying by Scroll.in, is “much higher than my reality, that is why my change of strategy, my change of route to get my goal, is contradictory to their mindset”.

Albert Camus famously said, "Martyrs, my friend, have to choose between being forgotten, mocked or used. As for being understood — never."

Irom took the risk, and people who first "used" her, conveniently chose to forget and mock her when she needed them the most.

#Polls, #Patriarchy, #Irom Sharmila, #Manipur
The views and opinions expressed in this article are those of the authors and do not necessarily reflect the official policy or position of DailyO.in or the India Today Group. The writers are solely responsible for any claims arising out of the contents of this article.