It is a reminder that we are a deeply casteist society where only some kinds of deaths and some kinds of humiliation receive attention and outrage.

It is a criminal, non-bailable offence but continues with blatant discrimination. Manual scavenging is still a predominant occupation for a large number of Indian citizens, and a reason for the deaths of many.

The most recent being the deaths of three manual scavengers, working on a contract basis in Bangalore, on Tuesday. This isn't new for Bangalore. The city has had a tumultuous history with regard to the death of manual scavengers.

Far too many have died due to asphyxiation and it is not surprising that the majority, if not all, have a direct connection with the poor state of tools supplied, if any.

Bangalore, my hometown, is known as the Silicon Valley of India. It has always been recognised as the fast-growing IT hub and the cradle of development.

Development for whom? What about those who actually clean our shit? Who, despite a ban on the practice, die on a regular basis?

Many workers die due to asphyxiation, many succumb to devastating skin diseases and still others die due to alcoholism from a young age, unable to carry on their work without dulling their senses. 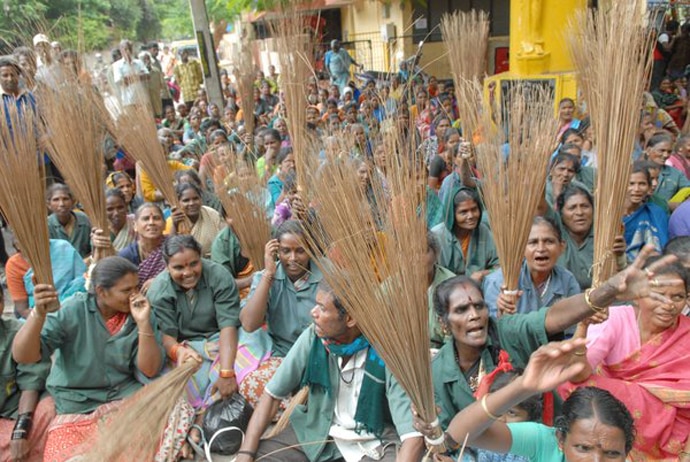 Under all the façade of development, technology and economic growth in the IT hub lies this gruesome occupation. Development becomes the prerogative of the higher echelons of class and caste.

After all, let us not forget that manual scavenging is, predominantly, a Dalit/lower caste occupation.

Taking cue from the Preamble of our Constitution, development seems to have its own narrative preamble: we the people (from the upper caste and class) give to ourselves this notional fabric of development to better our lives, even at the cost of others, although we shall strive as much as possible to make it seem that the notion of development shall equally apply to all.

The past couple of years alone have taken the lives of more than 1,300 manual scavengers throughout the country, despite the Prohibition of Employment of Manual Scavengers and their Rehabilitation Act passed in 2013.

It is ironic the extent to which the Act is blatantly disregarded, and violated, by most government agencies.

It is pertinent to note that criminalisation of manual scavenging did not take place only in 2013, but as far back as 1993.

It was only the extension of the criminalisation that was brought into force in 2013.

Manual scavenging was criminalised only in the context of "dry-toilets" in 1993, which was later extended to insanitary latrines, ditches and pits in 2013.

In Safai Karamchari Andolan & ors v. Union of India (2014), the Supreme Court confirmed that approximately 9.6 million dry latrines is India are still being manually emptied, although the practice remains explicitly prohibited and criminalised since 1993.

1.3 million manual scavengers, if not more, are identified as Dalits, and are mostly women. Today is an important day for everyone engaged in, passionate about or even interested in women’s struggles and feminist movements.

But unfortunately, there will be no transformation in social realities, including patriarchy, unless and until the diverse oppression of women, through its associations with caste and class, is collectively resisted.

The powrakarmikas are resisting the lack of wages (many of them do not even get minimum wages), the lack of benefits and degrading working conditions, including the exploitative nature of work enforced by the contractors.

Contract law primarily works on the fundamental principle called consensus ad idem, which is sadly nothing more than myth.

Consensus ad idem literally translates to "consent to the same thing in the same sense".

However, most contract labourers, including manual scavengers and powrakarmikas, hardly have any say in consenting from an autonomous position — to make independent decisions.

An undue advantage of power always plays a role, and through the unfortunate reality of social inequality and hierarchy, most labourers are forced to take these exploitative jobs for meagre wages, with the least safety.

This is excluding the humiliation and physical and sexual exploitation that they undergo as part of their jobs.

But what is surprising is that despite the state making manual scavenging a criminal offence two decades ago, the Indian Railways is the largest employer of manual scavengers in the country.

Far from trying to criminalise and prohibit manual scavenging in essence and spirit, the state is actively encouraging and propagating this exploitation as we remain ignorant as ever.

It is but a reminder that we are a deeply casteist society where only some kinds of deaths and some kinds of humiliation receive attention and outrage for historically reprehensible occupations based on caste oppression and exploitation easily escape our conscience and vision.

It's not ignorance, but our willful decision to not see it or hear it — to not engage with it. What an unfortunate society to live in, where who you are depends on how your shit is dealt with.

It is truly important for one to think twice before exclaiming, "My life is full of shit!"

#Powrakarmikas, #Safai karamcharis, #Manual scavenging
The views and opinions expressed in this article are those of the authors and do not necessarily reflect the official policy or position of DailyO.in or the India Today Group. The writers are solely responsible for any claims arising out of the contents of this article.